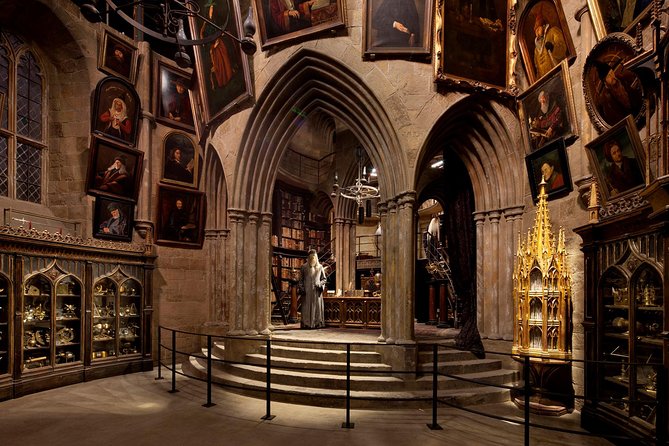 See Christ Church College, the Bodleian Library and other incredible sights on a guided walking tour of Oxford. After a fascinating morning exploring this historic city, we head to the Warner Bros Studio Tour: The Making of Harry Potter! We'll see Diagon Alley, Platform 9 ¾ and many other original sets, get up close to authentic costumes and props, and learn about the special effects and animatronics that brought J.K. Rowling’s magical world to the big screen.

Round trip travel by executive coach with friendly tour manager

Enjoy a guided walking tour in Oxford with a professional guide

As part of this magical day out from London, we'll visit the world famous University city of Oxford, enjoy a 60 minute walking tour in the company of a professional guide.

Founded in 1167, Oxford is England's oldest university. On our walking tour of Oxford, we'll walk past some of the most famous college buildings, cloisters and quadrangles, explore the back streets and across cobblestone squares, all the while standing in the shadows of the famous 'dreaming spires'.

The University has 38 independent, autonomous colleges and we will pass alongside several of these on your tour, including Christ Church, Merton, Oriel, Corpus Christi, Magdalen, University, Queens, All Souls, Hertford, Trinity, Balliol and St John's.

On this walking tour of hallowed academia the walking tour will take you past the Bodleian Library, the Radcliffe Camera, Sheldonian Theatre. We end our visit to Oxford with some free time, a chance for you to explore further at your own leisure before we continue onto the next stop of our tour, the Warner Bros Studio Tour London: The Making of Harry Potter & Oxford.

This is your chance to explore the magic surrounding that went into creating one of the most successful film series of all time, where you'll see real life sets, props and costumes, all used to make the Harry Potter books come to life! Marvel at the detail throughout the tour as you stroll through the Great Hall, and some of the most iconic sets from the movies, including Dumbledore's Office, 4 Privet Drive, the Gryffindor Common Room, the Weasley kitchen, Diagon Alley, the Atrium from the Ministry of Magic and the Hogwarts Express, plus so much more!

We'll spend at least 3.5 hours in the Studios, during which you'll have the opportunity to discover behind-the-scenes secrets which created the special effects we enjoy throughout the movie series, marvel at the intricate details that went into every single part of the films, as well as learning the techniques behind transforming actors into the creatures we see in the films. All will be revealed at the working studios where all eight Harry Potter films were produced!

It was an amazing trip! Specially Debbie- our guide at Oxford- is one of the best guides I’ve seen till now!!

We had a pleasant and lovely experience. Our guide and the bus driver are very friendly. Will definitely consider Viator’s service for our next holiday.

Great guide during our visit to Oxford and a lot of pleasure in Warner Bros Studios. Best day of our visit to the UK!

It was an amazing experience at Oxford and Warner Bros Studios.. we had a plenty of time to explore the city on our own pace... the tourist guides were very informative. Would love to go for another trip with these organizers. Thank you very much for making our trip a memorable one. :)

Oxford was not in my plan originally. I couldn't buy WB studio ticket anywhere else so I booked this tour. I'm really glad that i did. Oxford is so beautiful in fall and the weather is great on the day we visited. Our tour guide Katie told us many interesting stories about Oxford. She is really nice and friendly. The Warner Bros Studio tour is a great experience. We had about four hours to explore the place. Overall it was a great experience.

The Oxford guided tour and time for exploration/lunch was just right. We got to see a good amount of the colleges and heard a good deal of history--both Oxford and Harry Potter--from our guide, Debbie. The time at the studio was amazing, though if you want to spend a bit of time at each exhibit, you may want to choose a different tour so you can take longer. Four hours felt so short! And the line at the gift shop checkout was long, though it moved fairly quickly.

Most coolest Guide "Chris" we have had yet! He was an encycolpedia of information in regards to all thngs Harry Potter and all things BOOKS and All this Oxford. Please try and get him if you want to see Oxford but only have a short time to see it.

My son and I, as well as my grandchildren ages 9 and 12 who are avid Harry Potter fans, not only LOVED the Harry Potter segment,
but fell in love with Oxford and all the wonderful stories about this incredibly fantastic institution as told by Debbie, our guide in Oxford! The driver was terrific and Valentina, our guide on the bus, was quite informative! I would rate this tour a 10+.....Barbara from Belle Harbor, Queens, NY

The tour was interesting and fun. The tour guide was informative and we love her joke. On the way back there was a massive traffic jam thanks to her advise to take the tube instead we manage to arrive home early

I detest when things are not punctual. The tour guide told us a time and then had us waiting 12 min stuck in a bus after that time, apparently someone decided not to show. It is unfair to make the rest of us suffer I am livid about it! I also thought it disgusting the bus driver was smoking right outside the bus while we were loading. On the plus side the tour guide was friendly and the destinations were fun!

See Christ Church College, the Bodleian Library and other incredible sights on a guided walking tour of Oxford. After a fascinating morning exploring this historic city, we head to the Warner Bros Studio Tour: The Making of Harry Potter! We'll see Diagon Alley, Platform 9 ¾ and many other original sets, get up close to authentic costumes and props, and learn about the special effects and animatronics that brought J.K. Rowling’s magical world to the big screen.

Round trip travel by executive coach with friendly tour manager

Enjoy a guided walking tour in Oxford with a professional guide