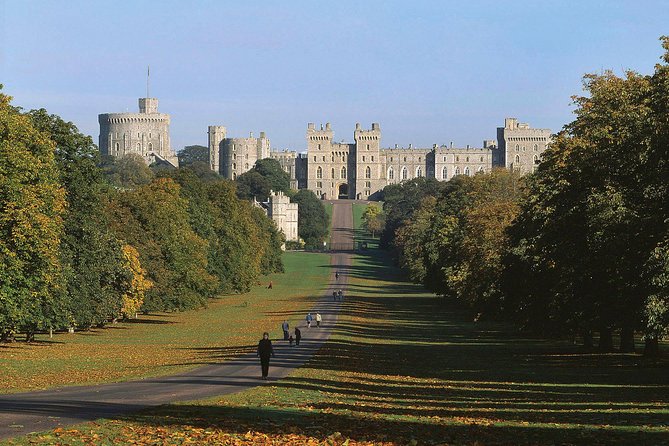 Windsor has been the home of Kings and Queens for centuries. Wander its cobbled streets and see the largest occupied castle in the world - home of the English and British monarchy for more than 900 years and official residence of Her Majesty The Queen.

Stonehenge is a must-see icon of England and with a history spanning 4,500 years, it has many different meanings to people today. Stonehenge is a wonder of the world, a spiritual place and a source of inspiration.

Plus, discover the beautiful English city of Oxford, home to the world-famous university and incredible architecture dating back to Saxon times.

- Confirmation will be received at time of booking
- The Changing of the Guard only takes place on selected dates (if option selected)
- St George's Chapel is closed on Sundays (if option selected)
- Windsor Castle (the whole castle) is closed from June 14, 15. We will offer you a walking tour of Windsor led by our expert guides – include to see the turrets and the outer walls of the castle, the long walk (which is used for processions) and a great shot of one of the castle courtyards from the outer gates. You will also be able to see the quaint streets, learn how this town has played such an intrinsic part in UK history and see views of where the recent Royal Wedding Procession passed by. After the walking tour you will also have some free time to wander around this beautiful market town. (if option selected)
- The State Apartments at Windsor Castle are closed on June 16 (if option selected)
- Stonehenge will be closed to visitors on 21 June due to the Summer Solstice. Tour will visit Avebury instead. (if option selected)
- Please note:the tour itinerary and order may change
- Not wheelchair accessible
- Stroller accessible
- Near public transportation
- Infants must sit on laps
- Most travelers can participate
- This experience requires good weather. If it’s canceled due to poor weather, you’ll be offered a different date or a full refund
- This experience requires a minimum number of travelers. If it’s canceled because the minimum isn’t met, you’ll be offered a different date/experience or a full refund
- This tour/activity will have a maximum of 53 travelers
- Face masks required for travelers in public areas
- Face masks required for guides in public areas
- Hand sanitizer available to travelers and staff
- Social distancing enforced throughout experience
- Regularly sanitized high-traffic areas
- Gear/equipment sanitized between use
- Transportation vehicles regularly sanitized
- Guides required to regularly wash hands
- Contactless payments for gratuities and add-ons
- Limited vehicle capacity empty seats left next to single travellers & odd numbered groups / Personal audio headsets provided to maintain distancing / Inclusions vetted to ensure they adhere to safety measures / E-tickets only no paper tickets / Staff newly trained in safety measures

Step back 5,000 years in time to prehistoric Britain as our guide helps bring the history of this fascinating monument to life. Who built Stonehenge? Why was it built? Discover the answer to these questions and the monument’s fascinating link to the Summer and Winter solstice. Come face-to-face with a 5,500-year-old man and visit the world-class exhibition centre, with 250 ancient objects on display. (If option selected.)

'The City of Dreaming Spires' is known for its distinctive architecture and holds the unique accolade of having examples of every architectural period going as far back as Saxon times. Wander its quaint cobbled streets on a walking tour of the city with our expert tour guide, who will bring the history and charm of this ancient city to life.

The Bodleian Library is the main research library of the University of Oxford, and is one of the oldest libraries in Europe. With over 12 million items, it is the second-largest library in Britain after the British Library.

The Sheldonian Theatre, located in Oxford, England, was built from 1664 to 1669 after a design by Christopher Wren for the University of Oxford. The building is named after Gilbert Sheldon, chancellor of the University at the time and the project's main financial backer.

Our first stop is Windsor Castle, the ancestral home of the British Royal family for more than 900 years and the largest, continuously occupied castle in Europe. Marvel at the splendour of the State Apartments, the grandest apartments in England, where paintings by Van Dyck and Rubens hang from the walls and the ceilings are painted with elaborate, magnificent murals.

Step inside St George’s Chapel, where HRH Prince Harry married Ms Meghan Markle and the tombs of prominent previous monarchs are located, including Henry VIII and Charles I. Don’t miss a colourful display of typical British pageantry that takes place every morning at the Changing the Guard ceremony, where the handover of duties between guards to the Queen takes place. If Her Majesty is in Windsor during your visit, you may be lucky enough to see the Royal Standard flying on the flagpole of the Round Tower. (If option selected.)

St George's Chapel at Windsor Castle in England, is a chapel designed in the high-medieval Gothic style. It is both a Royal Peculiar, a church under the direct jurisdiction of the monarch, and the Chapel of the Order of the Garter. Seating approximately 800,[1] it is located in the Lower Ward of the castle. (If option selected.)

It was a great day and Alex was such a knowledgeable and professional guide. Our highlight was Stonehenge. We recommend this trip to anyone who wants to spend the day in the English countryside and visit some truly remarkable historical sights.

A full day but packed with information and details. Our 2/19 tour with Emily was as much teacher as guide in a most interesting way. Intelligent and cheerful. Early arrival at Windsor cut wait time to fraction. Smart scheduling. Comfortable motor coach.

We wanted to see Stonehenge while in the UK. We took the trip to Windsor, Stonehenge, and Oxford. It was a quick glimpse at all of the sites. We went in February so there were not any crowds. I feel like I was able to see just enough of each place.

Excellent trip - the guide Kevin was great - thorough knowledge of history and interesting stories. There was enough time built in at all sites, considering the time and schedule. Would rebook with this group. But they are serious about leaving on time in order to maintain a schedule- we did have to leave some people behind at one site.

Very enjoyable tour and our guide Saul was very friendly! Would definitely recommend for anyone coming to London

Having a licensed tour guide makes all the difference because he shared a lot of great notes on each area, and he really went out of his way to please the guests.

Kevin was a great tour guide and very informative. Our only crucial is not enough time at Windsor castle or in oxford

This is a great tour, but be prepared that it is a very long day, and they do not provide a boxed lunch. If you feel you will need food, come prepared. Although there is a food court at Windsor station where you can QUICKLY purchase a sandwich to eat on the bus. I did not give this a 5 due to our tour guide. He spent an inordinate amount of time talking about himself. Almost everything we saw could relate to some “interesting” story from his university or military days. In a tour guide I require someone personable who can intersperse the information with a few cute stories, I am not interested in their biography.
If you do come prepared with food (No HOT food or drinks are allowed on the buses) and are prepared for a long day this is a great tour. The only place I found a lot of stairs was from the bus park to Windsor Castle. Otherwise everything was quite walkable.

We did the 3 sites in one day... it turned out to be an 12 hour day with the longest time in any one place to be about 1.5-2 hours. The line getting into Windsor Castle was horrendous and severely cut into the time we could have spent. We believe it would be better to book 2 of the 3 sites and spent more quality time at each place rather than run through and be under the gun to be back at the bus at a given time. We thoroughly enjoyed our guide Alexandra and bus driver Paul...he was an excellent driver through some very tight spots and Alex was extremely knowledge, funny and very pleasant. Overall a good day but just too much squeezed into one day.

It was not bad. The guide was so kind and easy to talk with. History she said was interesting and helpful to understand the place too.

Windsor has been the home of Kings and Queens for centuries. Wander its cobbled streets and see the largest occupied castle in the world - home of the English and British monarchy for more than 900 years and official residence of Her Majesty The Queen.

Stonehenge is a must-see icon of England and with a history spanning 4,500 years, it has many different meanings to people today. Stonehenge is a wonder of the world, a spiritual place and a source of inspiration.

Plus, discover the beautiful English city of Oxford, home to the world-famous university and incredible architecture dating back to Saxon times.