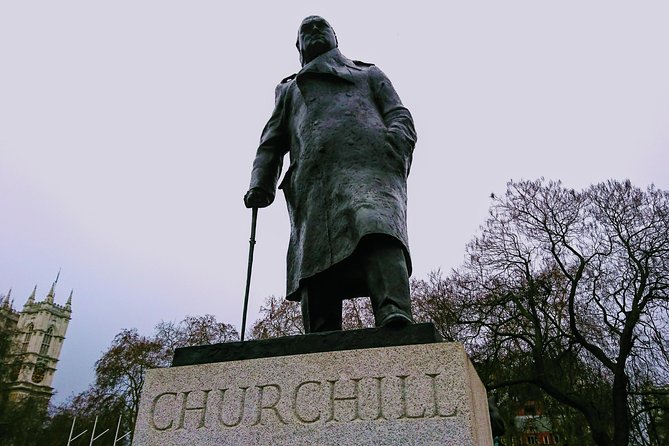 Follow the life of Winston Churchill by taking a private tour through the most important and personal sites he knew so well, including skip the line entry tickets to The Churchill War Rooms.

Trace his life, career, style and passions through the streets, shops, and buildings special to him. Starting at his childhood home, and those of his great ancestors, the tour moves on to his bachelor days and homes he lived in during his early married years.

"I am a man of simple tastes; I am easily satisfied with the best" - Visit tailor shops where Winston Churchill had his suits and hats made, including the famous 'Siren Suits'.

Churchill's trade mark Cigar barely left his lips. Visit his Cigar Merchant and sit in the great mans chair. (Smoke a Cigar too if you like)

The second part of the tour focuses on the career of Churchill, including The Houses of Parliament, 10 Downing Street, and of course entry to the Churchill War Rooms.

A fully private guided tour tailored to you.

- Confirmation will be received at time of booking
- Not wheelchair accessible
- Stroller accessible
- Service animals allowed
- Near public transportation
- Most travelers can participate
- This is a private tour/activity. Only your group will participate
- Hand sanitizer available to travelers and staff
- Guides required to regularly wash hands
- All UK Government guidelines and requirements will be followed at the time of travel.

Winston Churchill was born at Blenheim Palace in 1874, but his early years were spent in London. His father Lord Randolph Churchill was the son of the 7th Duke Of Marlborough, the family name being Spencer-Churchill we will start at Spencer House and the smaller house next door where a young Winston grew up. We will talk about his great ancestors, and his relationship to Diana Spencer, (Princess Diana)

This part of the tour focuses on the young, ambitious, war hero and bachelor Winston Churchill, keen to make a mark in the world.

We will visit his Bachelor pad, and the home he set up with his Wife Clementine, plus a visit to some of his favourite tailors.

You will also have time to pose with Churchill and Roosevelt at the Allies Statue.

This historic Saville Row Tailor has had a long association with the Churchill family. They made suits for Winston's father Randolph, and many for Winston throughout his life. (They produced the famous Pinstripe Suit in the Tommy Gun photo of Churchill.) Apparently Winston Churchill still owes the company some money, and the Tailors would always find Cigar Stubs in the pockets when suits came in for alterations.

Recently Henry Poole and Co were called upon to make Gary Oldman's suits for the movie The Darkest Hour.

"I am a man of simple tastes; I am easily satisfied with the best." - Winston Churchill.

This exclusive shopping area in St James mainly caters to discerning Gentleman with deep pockets. This is where James Bond buys his clothes and Cologne! You will see many of the Sir Winston Churchill frequented shops, including those selling his preferred aftershaves, and even his favorite Cheese Monger.

Churchill was a snappy dresser, but sometimes he needed something practical but comfortable when out in the grounds of his country estate Chartwell, or during the cold nights watching the bombs falling over London. Enter the 'Romper Suit' or 'Siren Suit' as it became known. Churchill trusted only one company to make these to his specifications, his shirt maker Turnbull & Asser.

This company was also the first company Prince Charles gave a Royal Warrant to.

Sir Winston was hardly ever pictured without his trademark Cigar. His favorite brand was Romeo Y Julieta. On this tour you will go to the Cigar Merchant where he bought his Cigars, you can sit in his chair, and even sample a Cigar in the upstairs lounge!

This St James Hatters has been making hats since 1676. They are the Worlds oldest Hat Shop. In that time they have made hats for some of the most famous (and infamous) people in history.

Sir Winston Churchill adopted Lock & Co's Cambridge and Homburg Hats as his trademarks, a long with his Cigar.

On 12th September 1908 Winston Churchill married Clementine Hozier at this Church right next to Westminster Abbey. Known as the Parish Church of the House of Commons it was a regular place of celebration, memorial or thanksgiving during the life of Winston Churchill.

Across the road from the Houses of Parliament the statue of Sir Winston Churchill gazes at his beloved House of Commons.

Churchill was offered a peerage, and a Dukedome but turned them both down as this would stop him or his male descendants serving in the house. Let's pause here for a while and discuss the political life and anecdotes of this extraordinary man.

It's no secret that Churchill loved a drink, and he also loved tradition.

This Pub has served every Prime Minister a drink including Winston Churchill. He certainly wasn't going to break that tradition!

The official residence of the Prime Minister since Robert Walpole.

This famous little street is known the world over. The door that Winston Churchill walked through as Prime Minster in 1940 is preserved and on display in the Churchill War Rooms.

This is an optional stop, a sad one and one that requires some extra walking, but for Churchill fans it may make an important stop to pay respects at the home where he died in January 1965. If you would like to add this stop, please let me know at the start of the tour so I can adjust the itinerary to include it.

Your tour includes full entry to the Churchill War Rooms, the secret underground headquarters of the War Cabinet during WW2.

Everything you see in this underground complex is original. The maps, charts, stationary, telephones, even the ashtrays are as they were left in 1945 when the War Rooms were locked up and left, making this one of Britain's most important WW2 sites.

Once America entered the War, this bunker became one of the key meeting sites for allied operations and planning, and many famous generals including Eisenhower met with Churchill here. As did King George and Queen Elizabeth when they met the Churchills for dinner in the bunker.

The former administration wing of the War Rooms now contains a huge Museum dedicated to the life and legacy of Sir Winston Churchill. You will be able to follow his life and career, and see many of his personal belongings.

As your Private Guide, I will escort you into the War Rooms with skip the line access and offer you an introduction to the site, and advice on getting the most out of your visit, then I will leave you to enjoy this historic site at your leisure.

Traveler pickup is offered
If required your Guide will personally meet you on foot at any central London accommodation or agreed landmark if you need assistance finding the start location of Green Park Underground Station. (Alternatively you can meet your guide directly at Green Park Station at the tour start time)

Richard was an amazing tour guide- personable and extremely knowledgable and pleasant. It was by far the best private tour I've had and would highly recommend to anyone looking for an intellectually stimulating and learning experience. He made Sir Winston come alive for us! I can't wait to come back again.

Richard was fantastic. He met us at our hotel and walked for a few hours around the city as he talked about all of the historical spots. He took us by my favorite perfume store for a sniff of Winston’s favorite cologne. We had to buy some too. We also stopped in at his cigar shop and tailor shop where we did a little shopping too. When I booked this tour, I booked it as a treat for my husband, but I loved it just as much as he did. A fantastic overall day for sure.

Superb day! This is a must do experience when in London. Get this private experience. It was a very thorough story telling sort of day. Winston Churchill would have been proud of what the tour says about him. Amusing and delightful experience.

Richard is an excellent guide, very professional and informative. We never felt hurried and really enjoyed our tour.

It was a great experience. Very well done and very informative. I would highly recommend this tour. We got to see some parts of London that we would not have seen before and intimate setting was wonderful.

This tour is informative and fun. You learn virtually everything about Churchill’s life and history but do it while walking to his favorite spots in and about Mayfair. Then, you go to the war room and museum and use what you learned to fully understand the man and his life in the context of his service to England. Richard is nice and easy going and really entertaining.

The tour guide, Richard , was very knowledgeable and talked enthusiastically about Churchill .He took us to various houses Churchill had lived in and visited during his life , and also shops patronised by him; his taylor,hat maker and cigar supplier ; giving us lots of details that aren’t the usual things you read about. My history buff husband loved it ; the visit to the War Rooms afterwards was fascinating .I thoroughly recommend both the tour and War Rooms I enjoyed them and I’m not “into” history !

Follow the life of Winston Churchill by taking a private tour through the most important and personal sites he knew so well, including skip the line entry tickets to The Churchill War Rooms.

Trace his life, career, style and passions through the streets, shops, and buildings special to him. Starting at his childhood home, and those of his great ancestors, the tour moves on to his bachelor days and homes he lived in during his early married years.

"I am a man of simple tastes; I am easily satisfied with the best" - Visit tailor shops where Winston Churchill had his suits and hats made, including the famous 'Siren Suits'.

Churchill's trade mark Cigar barely left his lips. Visit his Cigar Merchant and sit in the great mans chair. (Smoke a Cigar too if you like)

The second part of the tour focuses on the career of Churchill, including The Houses of Parliament, 10 Downing Street, and of course entry to the Churchill War Rooms.

A fully private guided tour tailored to you.