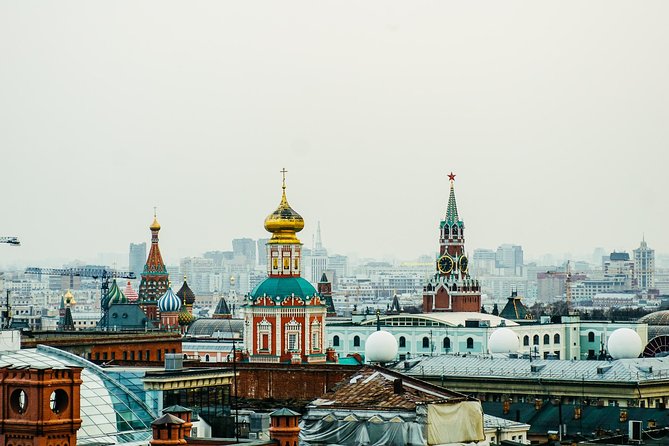 On this tour we will see all the main must see sights and also some of the off the beaten path places of Moscow.

We are experienced guides with degrees in art-history, we love our city and always ready to discover new about it.

We know the best cafes and restaurants of Moscow. We can always recommend what to do after the tour: best museums, cafes, bars, clubs, etc.

Our priority is the best personal experience always. We are more than just tour guides, we are your friends in a new city:))

We are ready to customise our tours according to your wishes.

Please, note that it's a walking tour (we will take public transport or taxis from time to time), so if you would like this tour to be on a car, please, notify us in advance and we can organise a car for the tour, as well:))

- Confirmation will be received at time of booking
- Wheelchair accessible
- Stroller accessible
- Service animals allowed
- Near public transportation
- Infant seats available
- No heart problems or other serious medical conditions
- Travelers should have a moderate physical fitness level
- This is a private tour/activity. Only your group will participate
- Face masks required for guides in public areas
- Hand sanitizer available to travelers and staff
- Social distancing enforced throughout experience
- Regularly sanitized high-traffic areas
- Transportation vehicles regularly sanitized
- Guides required to regularly wash hands
- Regular temperature checks for staff
- Paid stay-at-home policy for staff with symptoms
- We are always keeping up with any of the rules that are mandatory or recommended in Moscow and strictly follow them. We believe it's extremely important for all of us to follow this rules now to stay safe.

Stop At: Red Square, Moscow 109012 Russia
The main and the most beautiful square of the country.

The iconic sight, as famous as Eiffel tower or Berlin wall.

Not really red...but more about it on the tour:)
Duration: 30 minutes

Stop At: GUM, Red Square, 3 Metro Ploshchad Revolyutsii, Moscow 109012 Russia
The most famous and one of the oldest shopping malls of Russia.

Built in the 19th century with unprecedented technologies and engineering complexity.

Let's take a look at these wonder one of the constructors of which was the great architect - Shukhov.
Duration: 15 minutes

Stop At: Saint Basil's Cathedral, Red Square 2, Moscow 109012 Russia
A candy-cake-ice-cream-fairytale looking cathedral built in the middle of Moscow by the order one of the most controversial figures of Russian history - Ivan IV the Terrible (!) (during his lifetime more known as "the Great").

Let's talk about his legacy and crazy mind.
Duration: 30 minutes

It is build on the place where people started to settle as early as in 12th century, but most of the heritage was destroyed on the sight by order of Soviet leader Joseph Stalin for the sake of making another one of his crazy projects....
Duration: 30 minutes

Stop At: Kitai-Gorod and Varvarka Street, Varvarka St. Kitai-Gorod, east of the Kremlin, Moscow Russia
One of the oldest districts of Moscow, half-survived half-destroyed during Soviet period of Russian history.

There are located: one of the oldest monasteries of Moscow, the building of the first stock market in Russia, sone of the best restaurants of Moscow city center.
Duration: 25 minutes

Stop At: Nikolskaya Street, Nikol'skaya ulitsa, Moscow Russia
One of the most popular pedestrian streets of Moscow city-center now filled with souvenir shops and cafes, but back in the 16-17 centuries being the educational center of Moscow.

It stretches from the Red Square to the ex-KGB building...
Duration: 15 minutes

A dream for a kid.

Located on the same square with the ex-KGB building.

On the roof of the Central Children's store is one of the best secret viewpoints of Moscow city center.

Stop At: Bolshoi Theatre, Teatralnaya Sq., 1, Moscow 125009 Russia
One of the best opera and ballet theaters of the world!

Initially a private enterprise of one of the richest people of 18 century Moscow it went through 5 major restorations, through being a meeting hall for soviet union authorities, through WWII, through collapse of USSR back to being of the most desired performance venues in the world both for the dancers, singers and for the visitors and listeners.
Duration: 15 minutes

Stop At: Stoleshnikov Lane, Moscow Russia
The most expensive street in Russia.

The 12th most expensive street in the world.

One of the most beautiful streets of Moscow.

Stretching from the big shopping district to the Moscow Government office on one of the oldest streets of Moscow - Tverskaya, by which we will continue,
Duration: 30 minutes

Stop At: Tverskaya Street (Ulitsa), Tverskaya ulitsa, Moscow Russia
One of the oldest and widest streets of Moscow.

If you start at the beginning of the street in front of the Kremlin and drive straight for around 10 hours you will reach Saint-Petersburg.

It has also great heritage in terms of architecture - 18-19 century houses mixed with huge soviet blocks of marble and granite.
Duration: 20 minutes

Day 2: Moscow Off the Beaten Path

The 5th biggest library in the world.

With oldest books from 6th century.

The main building of library was finished 1920s in the Soviet monumental style - decorated with images of industrial workers and farmers on the roof and bronze bas reliefs of writers and scientists on the walls of the library.
Duration: 25 minutes

Stop At: Cathedral of Christ the Saviour, Volkhonka, 15, Moscow 119019 Russia
The main cathedral of orthodox christianity in Russia with crazy history of construction, destruction and reconstruction.

Initially finished in 1830s as a commemoration to the people, who died during the war with Napoleon it was destroyed a century later by the soviet dictator Joseph Stalin for the sake of constructing one of his craziest projects - Palace of Soviets. The project was never realized.

In the 1990s the decision was made to reconstruct the cathedral back after for some time the place has been a swimming pool, but more about it on the tour:)
Duration: 30 minutes

Stop At: Red October, Povarskaya st., 29/36, Moscow Russia
Ex-Chocolate factory which recently was transformed into one of the most prestigious hipster districts of Moscow.

Filled with clubs, galleries, architectural bureaus, design offices, bars, restaurants and some of the best universities of Russia in architecture and urbanism.

Just nearby is going on the construction of the biggest museum of contemporary art in Russia.

Across the river from one side is the biggest cathedral of orthodox christianity.

From the other - a park with sculptures of Lenin, Stalin, Karl Marx and the huge Soviet building which has became the main museum of XX century Russian art in the world.

Stop At: Muzeon Art Park, Krymskiy Val, 2, Moscow 119049 Russia
A part of the famous Gorky park (there is a film with such a name, rock-band Scorpions also mentions it in of their most famous songs - Wind of Change).

The park is also filled with sculptures of Russian artists, writers and scientists. A part of the park is dedicated to Soviet sculptures where you can see sculptures of Lenin, Brezhnev, Dzerjinsky and also a unique full body statue of Stalin - the only one survived in Moscow.
Duration: 30 minutes

Stop At: Moscow Metro, Moscow Russia
Probably the most beautiful metro in the world.

The busiest metro in Europe and also one of the fastest growing metro systems in the world (in 2018 there were opened 17 new stations and more than 33 km of metro lines - it's more than the whole of Europe together).

More than 200 pavilions in different architecture styles were constructed between 1920s and 1950s to show agricultural and industrial achivements of Soviet Union.

We will pass and see some of the most interesting ones (such as the pavilion of Cosmos (Space), Atomic Energy, Education, Culture, Ukraine, Belorussia etc.)
Duration: 1 hour

Traveler pickup is offered
Any centrally located hotel.
IMPORTANT: Please, write us the name of your hotel, during the booking or after in messages or through e-mail:)

It was a wonderful tour! We have different guide for each day, it just happened that they both call Kate😃. We love this tour as you can customize it with your guide to fit your plan and physical fitness. We’ve been to many interesting places, eg the Kremlin( not in the itinerary but they were so kind to arrange it with additional entrance fee), the Red Square, the wooden Kremlin, a few lovely metro stations, the former KGB headquarters, etc. We highly recommend this tour, our guides are so knowledgeable and helpful. What a magical memory! Thank you Kate and Nikita!

On this tour we will see all the main must see sights and also some of the off the beaten path places of Moscow.

We are experienced guides with degrees in art-history, we love our city and always ready to discover new about it.

We know the best cafes and restaurants of Moscow. We can always recommend what to do after the tour: best museums, cafes, bars, clubs, etc.

Our priority is the best personal experience always. We are more than just tour guides, we are your friends in a new city:))

We are ready to customise our tours according to your wishes.

Please, note that it's a walking tour (we will take public transport or taxis from time to time), so if you would like this tour to be on a car, please, notify us in advance and we can organise a car for the tour, as well:))

Moscow's Above and Underground Private Tour with a Guide