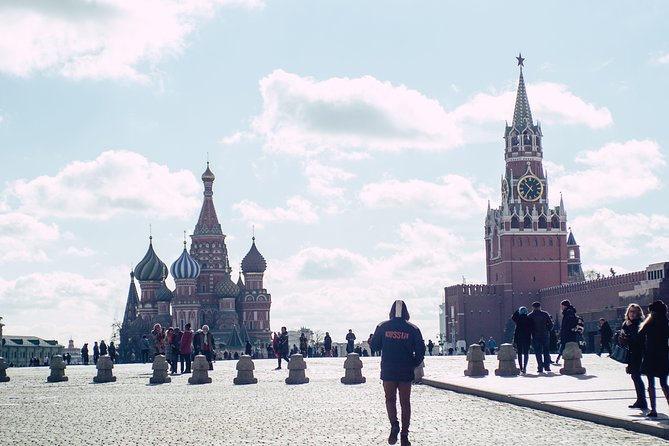 The tour that covers all the main sights of Moscow and more!

We will see not only the must-sees of Moscow city center, but also off the beaten path local places - not only monuments, but also places where locals spend their time.

We will show best of the local Russian/Georgian/Armenian/Ukranian cafes.

We will talk about history of Russia from 10th to 21st century (and beyond?).

Please, note, that it's a walking tour (we will take public transport and taxis if needed), but if you want it to be on a car, please, write us in advance and we will organise a car:))

- Confirmation will be received at time of booking
- Not wheelchair accessible
- Service animals allowed
- Near public transportation
- Infant seats available
- Not recommended for travelers with back problems
- Not recommended for pregnant travelers
- No heart problems or other serious medical conditions
- Travelers should have a moderate physical fitness level
- This is a private tour/activity. Only your group will participate

Stop At: Lenin's Mausoleum, Red Square, Moscow 613310 Russia
The house of a body of the first Russian communist leader. Still on the main square of the country:) We will try to go in and see him, but it depends on mausoleum's opening hours and also the length of the line:)
Duration: 15 minutes

Stop At: Park Zaryadye, Varvarka, 6/1, Moscow 109012 Russia
A modern 2018 park by famous US architects constructed on the place of a book of Guinness awarded hotel (the biggest in the world) called Rossia. Now features a concert hall and an observation on the city over the river with the view on a Stalin's skyscraper, Kremlin cathedrals and more.
Duration: 20 minutes

Stop At: Kitai-Gorod and Varvarka Street, Varvarka St. Kitai-Gorod, east of the Kremlin, Moscow Russia
The ancient part of the city. Here was living aristocracy of the city and the country called Boyars. Among other things here is located the building of the first Russian university, house where Romanovs were living, beautiful churches, and cosy pedestrian streets with great restaurants.
Duration: 20 minutes

Stop At: Zamoskvorechie area, Moscow 115054 Russia
A district where 19th century merchants were residing. It's a cosy quiet district, very popular among the muscovites because of the atmosphere here. It's also famous for the extraordinary amount of churches from different periods of Russian history in one place.
Duration: 30 minutes

Stop At: Saint Basil's Cathedral, Red Square 2, Moscow 109012 Russia
The symbol of Russia. A colorful gem of Russian religious architecture. Constructed by Ivan the Terrible it was on the edge of destruction in Soviet time but miraculously survived. Now a museum. Let's count it's domes:)
Duration: 20 minutes

Stop At: Muzeon Art Park, Krymskiy Val, 2, Moscow 119049 Russia
A part of the famous Gorky park (remember a song by Scorpions "Wind of Change"?). Not only a beautiful park, but also a place with the main museum of Russian art - Tretyakov gallery, open air exhibition of sculptures of Soviet leaders (Lenin, Stalin, Brezhnev etc.)
Duration: 20 minutes

Stop At: Peter The Great Monument, Moscow Russia
A "masterpiece" of 1990s. A more than 100 meters tall sculpture dedicated to first emperor of Russia, founder of Saint-Petersburg and Russian navy - Peter the Great. Will talk why it looks like Columbus and why it's standing in the middle of Moscow and what muscovites think about it:))
Duration: 20 minutes

Stop At: Bolshoi Theatre, Teatralny dr., 1, Moscow 109012 Russia
One of the most recognised opera and ballet theatres in the world. Here was also speaking Lenin in 1917. Nearby os located school of the theatre, Malyi thatre for drama, TSUM and Metropol hotel.
Duration: 20 minutes

Stop At: Central Children's Store, Teatralny dr., 5/1 Metro Lubyanka, Moscow 109012 Russia
Famous Soviet shopping mall for children. That was one of the few places, where it was possible to find proper clothes and toys for children. Now it also has an observation deck on the roof with a nice view of the city:)
Duration: 20 minutes

Stop At: Tverskaya Street (Ulitsa), Tverskaya ulitsa, Moscow Russia
One of the main and most ancient Moscow streets. On it there are located Mayor' house, sculpture to founder of Moscow Yuri Dolgorukii, Pushkin's square and statue.
Duration: 10 minutes

Stop At: Patriarch's Pond, Mal. Bronnaya Ulitsa, Moscow 123001 Russia
A district with the most expensive apartments in the city. There area to which muscovites come for great restaurants and to enjoy a little cosy pond in the middle of the busy city.
Duration: 15 minutes

Stop At: Residential Building at Kudrinskaya Square, Kudrinskaya Square, 1, Moscow 123242 Russia
One of the so called Seven Sisters of Stalin (7 skyscrapers built in a city after WWII to show the power of the state). We will come closer to have a better look at the sculptures with which it's decorated and wonder how it can be to live in such a grand building.
Duration: 20 minutes

Stop At: A. Vasnetsov's Apartment Museum, Furmanny Lane, 6, Moscow 105062 Russia
A 20th century apartment of the Russian artist, little known, but a wonderful example of the 20th century way of living in USSR. Also the artist was painting old Moscow and we can have a look on how Moscow looked like a century or two before.
Duration: 40 minutes

Stop At: Old Arbat (Stary Arbat), Arbat Ulitsa Arbatskaya Metro, Moscow Russia
Famous Moscow city street on which was living one of the most widely known Russian poets - Pushkin, one of the favourite Russian singers - Okudzhava and on which is located Ministry of Foreign Affairs.
Duration: 20 minutes

Stop At: Cathedral of Christ the Saviour, Volkhonka, 15, Moscow 119019 Russia
The main cathedral of Russian orthodox christianity. Built originally in 1830s, blown to pieces a century later, reconstructed in 1990s'.

Also the best observation deck in the city.
Duration: 20 minutes

Stop At: The Exhibition of Achievements of National Economy (VDNKh), Mira Ave., 119, Moscow 129223 Russia
The crazy soviet complex of pavilions in all imaginable architecture styles.

It was made to show the agricultural and industrial achievements of USSR.

Includes Space museum and a type of the rocket on which Gagarin flew to space.
Duration: 1 hour

Stop At: Museum of Moscow Metro, Khamovnicheskiy Val, 36 Vystavochnaya Metro station on the light blue Metro line., Moscow 119048 Russia
Moscow metro is a complex of more than 200 stations. Some of which are decorated with sculptures, mosaics, frescoes, stained glass and marble plates.
Duration: 1 hour

Stop At: Danilovsky Market, ul Mytnaya, 74 Metro Tulskaya, Moscow 115191 Russia
A cult place for muscovites. One of the fist big food markets, where you can find freshest pomegranates from Armenia nearby to the Vietnamese cafe which is just next to traditional Dagestanian bread place:)
Duration: 1 hour

Stop At: Sparrow Hills (Vorobyovy Gory), Moscow 119270 Russia
One of the main observation decks of the city. Asso a home to the Moscow State University.
Duration: 30 minutes

Stop At: Lomonosov Moscow State University (MGU), Leninskiye Gory, 1, Moscow 119234 Russia
One of the best universities in the world in the highest Stalin's skyscraper, located on the highest point of Moscow, from where by a cable car over the Moscow river you can get to the Olympic Stadium which was used previous (2018) year for the final games of FIFA as well:))
Duration: 1 hour

Stop At: Moscow-City, Presnenskaya Embankment Presnensky District, Moscow Russia
New Moscow business district. With some of the highest buildings in Europe and wonderful restaurants with Russian food with a panoramic view of the city, which you now can call yours as well:))

Such an amazing experience. This tour was exactly what i was looking for in Moscow. Primarily on foot and train but what an amazing way to see Moscow. Over 3 days, I had three different guides and after day one, i thought that there was some risk of cross over but the guides communicated everything internally with each other and ensured that I saw every square inch of Moscow that I wanted. Being a private tour, the guides were able to answer all my questions and could allow us to push through things either quicker or slower depending on my interests. The guides are what make this company great, friendly, knowledgeable, professional and well spoken and nothing was too much trouble. I highly recommend this as a way to see Moscow!

I was born and raised in Soviet Union, but my family was not. I wanted to show them the country where I was born, and its capital - Moscow. I made great choice - Nikita and Katya!
The limited space does not allow me to mention all the advantages of these awesome guides, but here are some of them:
1. Excellent English. Absolutely no problem with communication, rich vocabulary, nice two way conversation.
2. Excellent knowledge of the city. The first day we went according to our guides plans. We heard a lot of interesting stories about the old and recent history of Moscow Central area and Russia in general.
3. Perfect flexibility. They had in mind a certain plan for the second and the third day, but I asked to change it, and mentioned what I would like to see. Without missing a beat the new plan was created, and our guide Katya was as knowledgeable as if she prepared that dayly tour in advance.
4. All tours were interesting, all were accompanied by illustrations and pictures (on the mobile devices) what was here before (before Soviet time - during Soviet time), and "Look how great is it now!"
5. You have your time in the afternoon. Our guides usually left us at about 3-4 pm, so we were able to see things by ourselves, do some shopping, etc.
I highly recommend these guys to anyone that wants to have a good idea what Moscow is today, and what was it before. They are true representatives of the New Russia.
By the way, have good and comfortable walking shoes. More than 20.000 steps a day!

The tour that covers all the main sights of Moscow and more!

We will see not only the must-sees of Moscow city center, but also off the beaten path local places - not only monuments, but also places where locals spend their time.

We will show best of the local Russian/Georgian/Armenian/Ukranian cafes.

We will talk about history of Russia from 10th to 21st century (and beyond?).

Please, note, that it's a walking tour (we will take public transport and taxis if needed), but if you want it to be on a car, please, write us in advance and we will organise a car:))