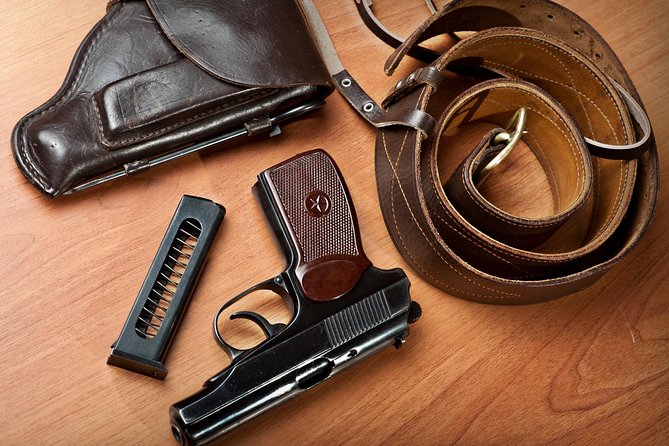 For more than 70 years Moscow was the capital of the huge Soviet empire. The streets of the city are still full of remnants of the communist regime and the Cold War, and the fearsome Soviet strongholds still guard the young democracy in Russia.

- Confirmation will be received at time of booking
- Wheelchair accessible
- DETAILED DIRECTIONS FOR YOUR COMFORT:
- Lubyanskaya Square is next to the St. Regis hotel. If you go by metro, take the red line (#1) and get off at Lubyanka metro station and take EXIT 9 or 10 to go outside. The meeting point is in the square just outside the metro station.
- If you prefer to walk, it's only 5 minutes from Red Square. The easiest route is to take Nikolskaya St from Red Square and walk all the way to the end of it to get to Lubyanskaya Square.
- Stroller accessible
- Near public transportation
- Transportation is wheelchair accessible
- Surfaces are wheelchair accessible
- Most travelers can participate
- This tour/activity will have a maximum of 15 travelers

The Solovetsky Stone is a monument located in Lubyanka Square in Moscow, across from KGB headquarters. The monument consists of a large stone brought from the Solovetsky Islands, the location of Solovki prison camp, part of the Soviet Gulag system. The monument was erected in 1990 to honor victims of political suppression in the Soviet Union.

It is one of the Central Squares of Moscow.

The Bolshoi Theatre is a historic theatre in Moscow, originally designed by architect Joseph Bové, which holds ballet and opera performances.

Historical department story in the heart of Moscow

Statue of 'The Worker' by famous Soviet sculptor Matvey Manizer

Tverskaya is the main thoroughfare of Moscow. It bears the name of the ancient town Tver to which this road original led. This street used to be the favourite walking street for Moscow intellectuals and elite in the 19th century. There's even a monument to the two Russian poets who liked to walk there: Pushkin and Esenin.

Eliseevsky store is probably one of the most famous stores in the entire Moscow. In 2003 the Eliseevsky store or Gastronome No. 1, as it was called in Soviet times , experienced a large-scale restoration according to the original drawings.

For more than 70 years Moscow was the capital of the huge Soviet empire. The streets of the city are still full of remnants of the communist regime and the Cold War, and the fearsome Soviet strongholds still guard the young democracy in Russia.

Day Trip to Suzdal and Vladimir with traditional Russian lunch

Private Tour to Vladimir and Suzdal by Soviet Van OR Multivan

Moscow : 4-Hour Panoramic Tour in Private Vehicle with many stops

Backstage Tour of the Bolshoi Theatre