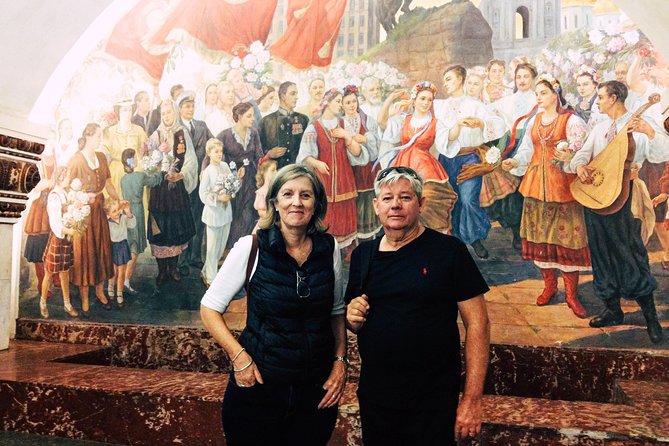 We are a team of art-historians, travellers, photographers and bloggers.

We will show you the best metro stations of Moscow metro and will be able to change the itinerary according to your wishes.

The tour will last for around 2 hours.

At the end we can leave at your hotel or anywhere in the city center.

See you in Moscow!:)

- Confirmation will be received at time of booking
- Not wheelchair accessible
- Service animals allowed
- Near public transportation
- Infant seats available
- Not recommended for travelers with back problems
- Not recommended for pregnant travelers
- No heart problems or other serious medical conditions
- Most travelers can participate
- This is a private tour/activity. Only your group will participate

The glorious 1930s marvel, where Stalin was giving one of his speeches and where people were hiding from Nazi's airstrikes.

The most richly decorated station of Moscow metro. Mosaics on the ceiling depict Russian generals and rulers. Lots of gold, art, grand architecture and columns covered with marble slabs - all for the people coming from three major rail terminals located at the station's exit.

Have you ever seen a metro station decorated with stained glass? Well, now you can tell that you've had. The theme here is workers of different professions (engineers, farmers, architects, musicians, artists etc.).

Majolica sculptures pf women, children and different species of plants. That's because nearby here is a tiny but very beautiful Botanical Garden. It was founded by Peter the Great (you may remember him for constructing Saint-Petersburg on the swamps, destroying enemy's sailing ships equiped with hundreds of cannons on the galleys and transforming Russia from a country somewhere on the east to a modern European empire).

A beautiful station depicting people of Belorus' on the mosaics. Also decorated with traditional Belorussian ornaments.

Traveler pickup is offered
We can meet you in any centrally located hotel.

IMPORTANT: please, write us the name of your hotel and time, when you want to start the tour:) Thanks and see you soon!

This tour is amazing. Katya, our guide, was a fountain of information, and the metro stations we visited were amazing. We took lots of photos and would recommend this tour to anyone visiting Moscow

We were shown the stations of the underground by Igor who was very personable and who spoke excellent English. He was fun and entertaining. He told us interesting stories about the development of the underground and did not overload us with boring information. He was generous with his time and made sure we knew how to get to where we wanted to go when the tour had finished. An absolutely fabulous trip.

A very interesting and informative tour. Katya is a wonderful guide and we highly recommend this tour.

Our guide shows us nearly 9 metro stations and explained the context with a bit of Russian history.
It was informative for us.

I had the chance to explore the many metro stations with Nikita, who was an exceptional guide. Very informative about the meanings of the various stations, and what they stood for. Nikita was very friendly and helpful with all kinds of other pearls about a wonderful stay in Moscow. I strongly recommend him for your Metro or any other tours you wish to explore. Movses.

We are a team of art-historians, travellers, photographers and bloggers.

We will show you the best metro stations of Moscow metro and will be able to change the itinerary according to your wishes.

The tour will last for around 2 hours.

At the end we can leave at your hotel or anywhere in the city center.

See you in Moscow!:)