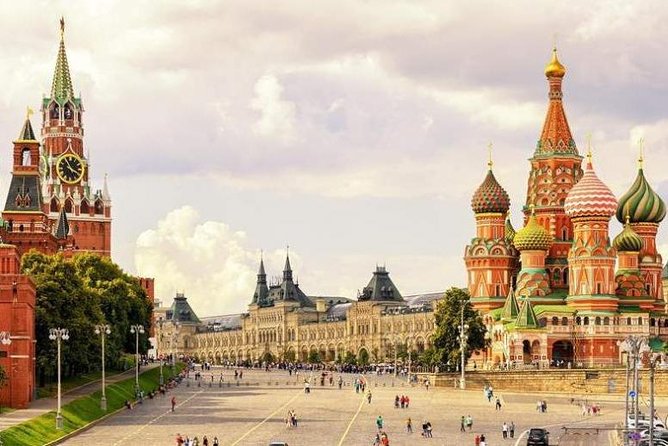 On this private tour we will see the iconic landmarks of Moscow from the comfort of the car and a bit of walking.

While exploring Red Square, St. Basil's Cathedral, Lenin's Mausoleum, the Cathedral of Christ the Saviour, Sparrow Hills, Metro and other important sights you will find out about the history of Moscow, traditions, culture and daily life of avarage Moscovite.

Part of the tour is by private car / minivan and 2nd part is a Walking tour (All around Red Square). Transportation costs are included.

If you want to visit Kremlin Territory and Cathedrals / Armoury Chamber Museum please let me know as tickets should be booked beforehand (limited amount).

- Confirmation will be received at time of booking
- Near public transportation
- Stroller accessible
- Not wheelchair accessible
- Most travelers can participate
- This experience requires good weather. If it’s canceled due to poor weather, you’ll be offered a different date or a full refund
- This experience requires a minimum number of travelers. If it’s canceled because the minimum isn’t met, you’ll be offered a different date/experience or a full refund
- This is a private tour/activity. Only your group will participate

Red Square is one of the most famous Russia's places of interest. It is located right in the heart of Moscow. Many significant buildings surround Red Square: the Kremlin, Lenin's Mausoleum, Saint Basil's Cathedral, GUM trading house and Kazan Cathedral there. The State Historical Museum is also located in the square.

A world-famous landmark of Moscow. In 1990, it became part of a UNESCO World Heritage Site.

Lenin’s Mausoleum is a Soviet monument in which the mummified remains of Vladimir Lenin, the main leader of the October Revolution in 1917 and the first Soviet President, are preserved.

The steeple-roofed towers of the Moscow Kremlin
Russian: Кремль
and its walls with swallow-tailed crenellations are irreplaceable elements of Moscow’s panoramic metropolis. The settlement where the Kremlin is now dates back to ancient times.
There are 20 towers in Kremlin and we will see the most significant ones.

The most iconic Dapertment store in Russia. Here we will have a chance to try USSR ice-cream.

The pride of all Russia - Bolshoi Theater - is one of the world’s biggest opera and ballet theaters, rated as high as La Scala in Italy and Covent Garden in England. It is hard to overestimate the importance of the Bolshoi Theater for Russia. You can only enjoy its immortal creations and to admire its magnificent building, which is also an outstanding example of Russian architecture.

Alexander Garden was one of the first urban public parks in Moscow. The park comprises three separate gardens, which stretch along all the length of the western Kremlin wall for 865 metres (2,838 ft)

The Tomb of the Unknown Soldier of Moscow is a memorial dedicated to the Soviet soldiers who fell during the Great Patriotic War (1941-1945). The remains of the unknown soldier, killed in the Battle of Moscow and initially buried in a mass grave at Zelenograd, were relocated to the Kremlin Wall in December of 1966. In front of the tomb is a Eternal Flame with underneath the inscription: "Your name is unknown, your deed is immortal" . To the right of the memorial is a grantie wall with the following inscription: "1941 - To Those Who Have Fallen For The Motherland - 1945"

Tverskaya is the main thoroughfare of Moscow. It bears the name of the ancient town Tver to which this road original led. When St. Petersburg was founded this road linked these two major cities of Russia. It was also known as the tsar's road, as all Russian monarchs were driven along Tverskaya on their way to their coronation, which took place in the Assumption Cathedral in the Moscow Kremlin.

The main objective of the station architects was to overcome a sense of dungeons in on platforms "for Muscovites to enter the underground places after a hard day's work, filled with light, in a way that did not leave their joyous, festive feeling." The problem was solved successfully.

The station was opened on March 13, 1938. The most interesting feature of the station is 76 bronze figures, situated in niches of 18 arches. This peculiar gallery of images of Soviet people, aimed to personify force and power of the country, its glorious past and bright future. One of the bronze sculptures — a dog that accompanies a frontier guard — is believed to bring good luck if you touch its nose.

This station was constructed to act as a type of “gateway” to Moscow because it is located under the three busiest Moscow railway terminals. It represents the peak of the Stalinist Empire style with its elegant bronze chandeliers, marble arcades and monumental mosaics made from smalt.

This is one of the most ceremonial stations in the Moscow Metro. It is best known for its 32 stained-glass panels, which were all designed by the famous Soviet artist Pavel Korin.

Sparrow Hills is a hill on the right bank of the Moskva River and one of the highest points in Moscow. On top of the hill, 85m above the river, is the observation platform which gives a beautiful panoramic view of the city.
Sparrow Hills has been an inspiration for many Russian poets and writers. In old times travelers used to climb on top of the hill to enjoy the view and to see the final point of their destination: Moscow.

One of the most distinct features of the Moscow skyline, Stalin's so-called ‘Seven Sisters’ are still amongst some of the tallest buildings in Europe.
The looming edifice of the Moscow State University (MGU) was the first of the Seven Sisters to begin construction and was finished second in 1952. In total more than 400 architects worked on the project, submitting countless plans and designs which in turn amounted to a great advertisement for communal process back then. With a height of 235.7m, this squat giant is topped by a 12 tonne star and its massive dimensions ensure that a walk around the perimeter lasts for 3 km. MGU was built using the labour of gulag prisoners and German POWs, some of whom were even housed on an upper floor when not involved in building work. One Daedalus is even supposed to have tried to escape by strapping wooden wings to his arms and springing off the side of the building in an attempt to fly away.

One of the main sights in the west of Moscow is Victory Park (Park Pobedy) which is located on what is known as Poklonnaya Gora (Submission Hill) as historically this was where guests coming to Moscow from the West were expected to bow down (poklonitsya) and pay homage. It was also where Napoleon waited in vain to be handed control of the Kremlin by the Russians after capturing the city. Although the park is in honour of the Soviet victory in the Second World War, it was only officially founded in 1995. Today it is an important venue for Russia's Victory Day celebrations on 9 May where veterans gather and are thanked and given flowers by younger generations.

Moscow's Triumphal Arch commemorates Russia's victory over Napoleon. It was originally built on Ploschad Tverskoy Zastava where a wooden arch was first put up to welcome victorious Russian troops back to Moscow. In 1936 the arch was dismantled and later reinstalled in its current location between 1966 and 1968. The arch is decorated with images of warriors depicting glory and courage and Nike, the Greek goddess of victory, is featured on the top of the arch.

Hotel Ukraina is one the famous seven buildings in Moscow that are known as “Stalinist skyscrapers” or “Seven Sisters”. Their special, highly distinguished style characterizes to a large degree the appearance of downtown Moscow serving as a striking architectural landmark of Russia’s capital.
Hotel Ukraina that opened on May 25, 1957 was recognized as the largest hotel in Europe. For many years it was dubbed as “Moscow home” for guests from all around the globe. After half a century in service, the hotel required a thorough overhaul and complete modernization. The work continued for three years, and then, on April 28, 2010 a new, modern hotel was opened in the legendary building: Radisson Royal, Moscow.

Stop At: Cathedral of Christ the Saviour, Volkhonka, 15, Moscow 119019 Russia

The Cathedral of Christ the Saviour of Moscow is the most important cathedral in Moscow, even before the Cathedral of St. Basil, with a unique and bizarre history that dates back to the nineteenth century and still continues to this day. In addition, it is the highest orthodox temple in the world.

Unlike other Moscow cloisters, it has remained virtually intact since the 17th century. In 2004, it was proclaimed a UNESCO World Heritage Site.

On this private tour we will see the iconic landmarks of Moscow from the comfort of the car and a bit of walking.

While exploring Red Square, St. Basil's Cathedral, Lenin's Mausoleum, the Cathedral of Christ the Saviour, Sparrow Hills, Metro and other important sights you will find out about the history of Moscow, traditions, culture and daily life of avarage Moscovite.

Part of the tour is by private car / minivan and 2nd part is a Walking tour (All around Red Square). Transportation costs are included.

If you want to visit Kremlin Territory and Cathedrals / Armoury Chamber Museum please let me know as tickets should be booked beforehand (limited amount).