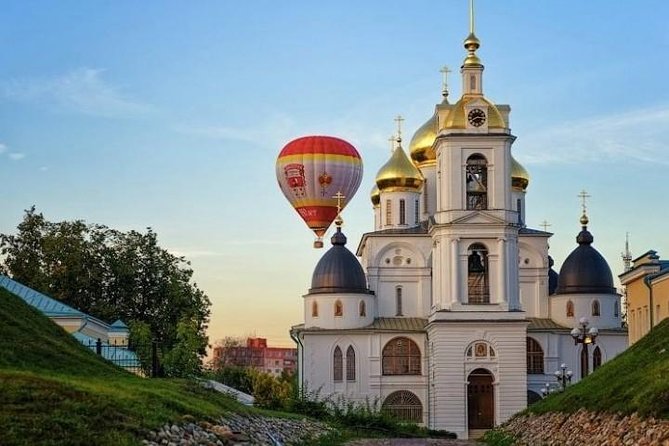 Don't miss the chance to go for a hot air balloon ride over one of the anсient cities in Russia, Dimitrov, founded in 1154 by Yuri Dolgorukiy. Admire the wonderful landscapes and all the must-see sights in Dimitrov from the sky on this 60-minute amazing flight. Get your camera ready to make magnificent photos from your flight. Enjoy the luxury of your own private hot-air balloon tour over the picturesque Moscow suburbs. Embark on a unique adventure and be greeted with a complimentary glass of Champagne after your flight. After landing back on Earth, it's time to see the sights that you have noticed from the sky.

- Confirmation will be received at time of booking
- Minimum age is 6 years. Minimum height is 120 cm. Children must be accompanied by an adult
- Children must be accompanied by an adult
- A maximum of 4 people per balloon
- Maximum total weight of your group should not exceed 485 lbs
- There is no seating available in the basket, passengers will be standing during the flight
- Please advise any specific dietary requirements at time of booking
- The duration of transfers are approximate, the exact duration will depend on the time of day and traffic conditions
- Not advised for pregnant women
- Wear comfortable clothes and shoes. A cap/hat can also be very useful. Bring a jacket or a sweater that you may put on during the preparation of the balloon or after landing
- All passengers must be able to climb into the basket with minimal assistance
- During the flight, your guide remains on the ground, and you will be accompanied by English-speaking pilot
- For safety reasons, balloon takeoff and landing areas are about 0.5-1 km out of asphalt or other hard coat roads. So your car/van will drive of unequipped road or off-road this part of the way.
- Takeoff and landing areas usually are different and may be rather far from each other
- Not wheelchair accessible
- Most travelers can participate
- This experience requires good weather. If it’s canceled due to poor weather, you’ll be offered a different date or a full refund
- This tour/activity will have a maximum of 4 travelers

Start your Moscow hot air balloon experience with a hotel pickup after sunrise, then travel by luxury in an air-conditioned van to the outskirts of the city. On arrival at the flight site, meet your host and watch your brightly colored balloon inflate. Before loading into the basket, the pilot will conduct a safety briefing and you will receive the required technical information and then prepare for take-off. Board your hot air balloon and start your unforgettable experience from the region of one of the oldest Russian cities, Dimitrov, 60 kilometers from Moscow's city center, the city of Military Glory, founded in 1154 by Russian Prince Yuri Dolgorukiy. Float over the region admiring its beautiful landscapes from the sky.

You'll experience breathtaking 360-degree views of the famous sites such as the Dmitrov Kremlin, Assumption Cathedral (Uspensky Sobor), St. Elizabeth Church, Boris and Gleb Monastery, Vvedenskaya church, Kazanskaya Church and other popular sites. Get your camera ready to capture bird’s-eye views of the Moscow countryside. You can get unforgettable and incredible photos no matter where you stand in the basket.

During your flight you will be served a glass of champagne and some sweets to make your journey more pleasant. The air temperature is more or less the same as on the ground and the balloon moves at the same speed as the wind around it. After floating through the air, it’s time to return to ground level, so listen to your pilot’s instructions for a smooth landing. After touching down, you will get a special hot-air balloon diploma certificate. Finish your drink, then bid your pilot goodbye.

Finish your wonderful day with a private transfer back to your Moscow hotel or any place in central Moscow that you wish.

Traveler pickup is offered
Departure Point: Your Moscow hotel or hostel
Directions: Meet your driver at the lobby of your hotel
Dates: Daily
Return point: Returns to original departure point

It was an amazing experience setting up the balloon and taking off....however there was no good landscape to enjoy.
An in control flight Captain did an amazing flight and got us back to a smooth landing.

We were picked up at 4am for our hot air balloon ride over Dmitrov. Flight was a spectacular. We flew through a ravine, skimmed the tops of trees so you could pluck off branches and dipped the basket into a lake, all things that would not be permitted in Canada. Absolutely amazing. Air was so fresh and scent kept changing from the fields to the forest to the lake, and the scenery was beautiful. First flight certificate ritual after the flight was nicely done and champagne was a nice way to cap off the experience.

Only drawback was the tour promised an air conditioned coach, and instead we had 5 people crammed into a small, hot Volkswagon sedan. This car even got stuck in the mud in the field where we got picked up and we had to help to push it out. One of us got totally covered in mud while doing so. Tour was also to include: 1. Dmitrov City Tour 2. Admission Tickets to the Dmitrov Kremlin and 3. Three course Russian lunch. It came as a great surprise to us to learn that we were being driven straight back to Moscow after the balloon ride was over. The driver claimed to have no knowledge of the the other parts of the tour and said he was instructed just to take us straight back. When I showed him the voucher, he said if we stayed in Dmitrov the traffic would get too bad. I highly doubt after lunch traffic would have been worse than coming back as we did in the middle of morning rush hour. In fact traffic was so bad at that time that rather than being dropped at hotel we were dropped at end of the metro line where we had to buy tickets. Essentially we only got 1/2 the tour promised, but afterwards Viator did give us a 50 refund.

Don't miss the chance to go for a hot air balloon ride over one of the anсient cities in Russia, Dimitrov, founded in 1154 by Yuri Dolgorukiy. Admire the wonderful landscapes and all the must-see sights in Dimitrov from the sky on this 60-minute amazing flight. Get your camera ready to make magnificent photos from your flight. Enjoy the luxury of your own private hot-air balloon tour over the picturesque Moscow suburbs. Embark on a unique adventure and be greeted with a complimentary glass of Champagne after your flight. After landing back on Earth, it's time to see the sights that you have noticed from the sky.