Private Walking Tour of Moscow Including The Kremlin and Red Square 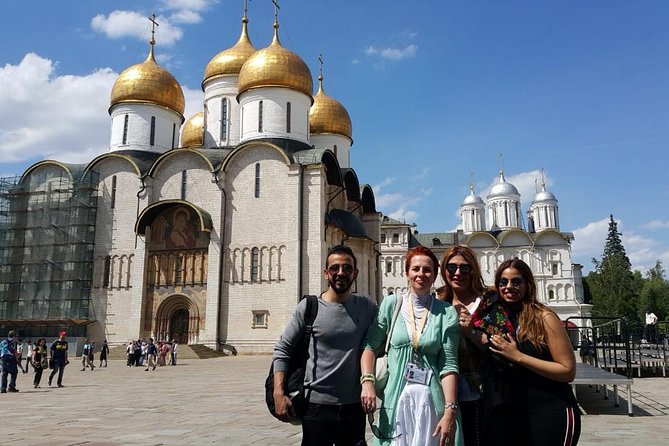 Learn about the history of Moscow and Russia from an experienced guide on a 4-hour comprehensive walking tour. You will visit the most notable city attractions, such as the Red Square, GUM, St.Basil's Cathedral (outside), The Kremlin and much more. Your guide will take you inside the Kremlin and show you where the Russians Czar’s were crowned and where some of the most fateful decisions in world history were made.

- Confirmation will be received at time of booking
- Travelers should have a moderate physical fitness level
- Wheelchair accessible
- May be operated by a multi-lingual guide
- The tour can be modified to meet your preferences
- This is a private tour/activity. Only your group will participate

Start your tour around Manezhnaya Square next to the Zhukov monument and discover one of the most notable memorials to World War II.

Go inside the Moscow Kremlin where the Russian Czars were crowned and some of the most fateful decisions in world history were made.

See the famous Tsar Cannon and Tsar Bell and find out why they were constructed and how they were eventually used.

Admire the Cathedral Square - the true heart of the Russian empire and visit 3 most important Cathedrals: the Assumption, the Archangel and the Annunciation.

Soak in the atmosphere of the most famous tourist attraction in Moscow and find out why the Square is actually named Red.

Pass by Lenin's Mausoleum and go inside if you would like to see the mummified statue of the famous revolutionary leader.

Marvel at the magnificent structure of the Russian State History Museum that stands next to another notable building – Museum of War of 1812 with Napoleon.

Go inside the most posh and luxury store of Czar Russia, Soviet Russia and modern day Russia.

Take a picture with the most famous Russian church while your guide will tell you a tale of the tragic fate of the cathedral's architects.

Discover the story behind the name of one of the oldest streets in Moscow where numerous prominent buildings are located including an old monastery.

Admire one of the most famous theaters in the world where the astounding Russian ballet originated.

See the infamous building of the Soviet Secret police and listen to the stories about such people as Aleksandr Solzhenitsyn who were crushed by this repressive machine.

Enjoy the panoramic view of Moscow city center from the rooftop of the most notable children's store in Russia - Detskiy Mir (Children's World).

Traveler pickup is offered
Your guide will meet you at your place of stay. One day before the tour you will get an email with information about your guide (their name and contact number).

Katya was extremely knowledgeable and tailored our trip to the places we wanted to see. We experienced a wide variety of Moscow sites including the metro, red square, kremlin and gym high end shopping mall.

Wonderful way to discover the main sites and history of central Moscow including the Kremlin. Oksana our guide was extremely knowledgeable and friendly. Would thoroughly recommend this tour.

We had a great experience. Our tour guide Oleg was brilliant and extremely knowledgable. He showed us all the sights and even took us to a special roof top viewing spot. Spasiba!

We enjoyed our tour with Alex. Alex’s English is excellent and she was informative. We found Alex friendly and professional.

Very informative and fun sights to see. It was a nice walk in nice weather. Very professional guide.

The tour was interesting and overall it was worth the investment. One has to be prepared to see a lot of churches! In the end we requested to skip some as they were all looking the same after a while. In any case, the tour was informative and walking through the Kremlin on a beautiful summer day was wonderful.

Our guide was Tanya, who provided us with an excellent service throughout the day from pick up at the hotel through to hotel return. Her knowledge of the history of Russia was explained with a good back ground of contemporary events elsewhere in the world. We enjoyed our day out.

I'd highly recommend this tour, my guide Tanya was good company and provided lots of insights into the places we visited during the tour.

We had a good time and thanks to Alexendra @ Shasha our nice and helpful tourist guide😃. Recommended for the first time visiting Moscow. Actually it is easy to explore by yourself by walk or metro/tram in the city.

I enjoyed the tour. The tour guide was enjoyable and sociable. The Kremlin is magnificent. Definitely tour the Diamond collection and the armoury.

Private Walking Tour of Moscow Including The Kremlin and Red Square

Learn about the history of Moscow and Russia from an experienced guide on a 4-hour comprehensive walking tour. You will visit the most notable city attractions, such as the Red Square, GUM, St.Basil's Cathedral (outside), The Kremlin and much more. Your guide will take you inside the Kremlin and show you where the Russians Czar’s were crowned and where some of the most fateful decisions in world history were made.