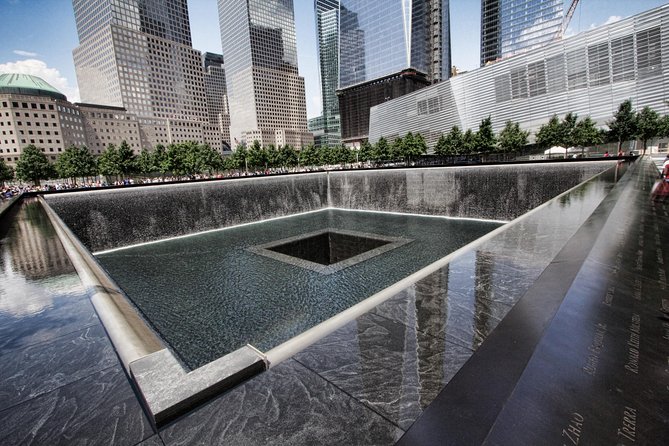 Gain a deeper understanding of the events surrounding the attacks on the World Trade Center on September 11, 2001, and the acts of heroism that rallied a nation on this 1.5 hour walking tour of Ground Zero. A certified guide with a personal connection to the events shares firsthand stories as you explore the site of the former World Trade Center and the National 9/11 Memorial, where you can pay tribute to the lives lost. Choose to upgrade and add on a ticket to the 9/11 Museum to see artifacts associated with that fateful day.

- Confirmation will be received at time of booking
- A moderate amount of walking is involved. Please wear comfortable shoes
- Please dress appropriately and bring layers in case of cold weather
- Tour is wheelchair accessible
- 9/11 Museum admission is NOT included unless option is selected at time of booking
- Children 5 and under free with paid adult ticket
- Not wheelchair accessible
- Stroller accessible
- Service animals allowed
- Near public transportation
- Most travelers can participate
- This experience requires good weather. If it’s canceled due to poor weather, you’ll be offered a different date or a full refund
- This tour/activity will have a maximum of 20 travelers

We will start the tour at St. Paul's Chapel, New York City’s oldest public building still in continuous use. Just one block away from the 9/11 attacks, it miraculously survived the falling building and debris. St. Paul’s Chapel served as a makeshift rescue center during the aftermath. Its iron fence became a bulletin board where family members posted notices of their missing loved ones. Today, with the mementos received from people around the world supporting New York City, the church serves as both a landmark and a tribute.

The outside structure of the World Trade Center Transportation Hub, is the subway entrance and extensive shopping center.

Enter the 911 Museum with exclusive skip the line access. Admission to the museum is only included if that option is selected.

Lindsey was so sweet. She was incredibly knowledgable about every little thing having to do with the world trade centers, oculus, 9/11 attacks, and ground zero! So intelligent! Grateful to have had her as a guide. 11/10!

Peter was a very informative tour guide. He informed us he was the 2nd best tour guide in NYC lol. We hope our rating elevates him to Number 1. Tour is highly recommended and definitely worth the money. Museum was wonderful. It was a moving and solemn experience. Don't rush yourselves allow plenty of time and go early. Awesome day.

Alison was a fantastic guide who explained to us the events of 9/11 in a very informative and engaging manner. We learnt so much about the events of that fateful day. Very heart moving experience. Would highly recommend this tour to everyone visiting NYC.

The tour was excellent. Nick our guide was well informed and very knowledgeable. His delivery of the information also clear and organized. Well done.

Our guide Bryan was fantastic. It is really the first time that we had a guide explaining so vividly with a lot of personal touches. Despite the fact that 9/11 was a horrible event, Bryan's message was one of hope, courage and human kindness. Best tour ever...

Our family took the 9/11 tour yesterday- Julia was our guide. It was informative, detailed and worth every dollar.

Our tour included the memorial and museum both of which were highlights of our trip. Our guide was distracted at times and "previews" of what we were were going to see next at times prevented having extended quality time at key spots on the tour.

The tour was very good, do-able for all ages as the distance covered isn't massive and although there are some stairs there are also escalators/elevators. Toilets are nearby. Our guide, John, was very informative, spoke clearly and told us about his personal experience of 9/11. The memorial pools were not on due to the high wind, but we returned another day. The museum is huge, very interesting and very emotional. With damaged vehicles, twisted girders and the many personal stories and effects, it really hits home what a devastating tragedy this was for all involved. I found it too hard hitting in parts. We were in there about 1.5 hrs and still missed bits. I've rated the tour as 3 stars only because of the bad experience we had at the beginning of the tour. Due to a mix up with the tour company (not viator) we weren't on the list and, despite being two of the first there, had to wait whilst others were checked in as and when they arrived. I had a ticket which PROVED payment and an email but the rep was having none of it. We were made to feel like gatecrashers. Eventually, he found confirmation, but no apology whatsoever was offered and we missed the beginning of the tour. It was handled very unprofessionally. Also, beware the men selling 'memorial books' - they appear to be connected to the tour but they aren't.

To be fair, it was a really cold, windy day. I was a little disappointed they we didn’t spend more time at the actual memorials. We chose not to do the museum so we could spend more time on the site. That was the least of the tour. I didn’t feel like I got a lot for my ticket price.

Gain a deeper understanding of the events surrounding the attacks on the World Trade Center on September 11, 2001, and the acts of heroism that rallied a nation on this 1.5 hour walking tour of Ground Zero. A certified guide with a personal connection to the events shares firsthand stories as you explore the site of the former World Trade Center and the National 9/11 Memorial, where you can pay tribute to the lives lost. Choose to upgrade and add on a ticket to the 9/11 Museum to see artifacts associated with that fateful day.

Statue of Liberty and Ellis Island with Optional Upgrades