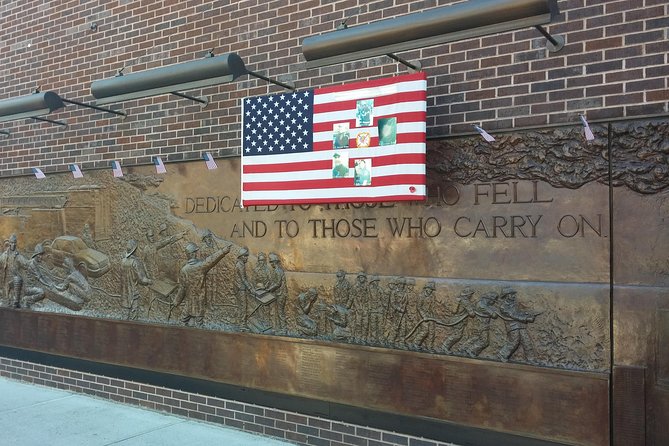 Take an in depth and meaningful visit to the 9/11 Memorial and World Trade Center area where your guide will point out details in the architecture and design of the area that you would never even think to look for on your own so you'll experience at the World Trade Center will be more meaningful and informative.  You'll visit The 9/11 Memorial, St. Paul's Chapel, Fulton Center, Fireman's Memorial, The Oculus and Brookfield Place and more.

- Confirmation will be received at time of booking
- Walking tour is approximately 2 hours. If you chose the 9/11 Museum option your guide will provide you with your tickets. Average visit takes approximately 2 hours. Please plan your schedule accordingly.
- Guide does not enter 9/11 Museum with the group, this portion of the visit is self guided
- Tour departs promptly as scheduled. No refunds will be issued for missing the tour due to late arrival.
- Wheelchair accessible
- Stroller accessible
- Service animals allowed
- Near public transportation
- Transportation is wheelchair accessible
- Surfaces are wheelchair accessible
- Most travelers can participate
- This tour/activity will have a maximum of 25 travelers

Tour starts at St. Paul's Chapel. It played a significant role in the aftermath of the September 11th attacks.

See the Bronze Memorial, dedicated to the FDNY firefighters who were lost on September 11th.

Learn the significance and symbolic design of the 9/11 Memorial from your guide, then spend some time reflecting near the pools. Entrance to the 9/11 Memorial is included for all visitors; if you opted to include a 9/11 Museum admission ticket, you can visit after the walking tour. Museum visits are self guided; plan around two hours to take in all the exhibitions.

Part of the reconstruction of the World Trade Center, the Oculus is an ultra-modern transportation hub and shopping mall with a space-age feel. Learn about its symbolism and design from your guide.

Visit the Winter Garden and the North Cove Marina to take photos of the World Trade Center from another angle and hear stories about the evacuation efforts on the Hudson River on 9/11.

Visit Liberty Park, which overlooks the 9/11 Memorial, and is home to Fritz Koenig's There and America's Response Monument.

Learn about the meaning and design of this monument, designed to honor the brave members of the U.S. Military.

Debbie, our trip leader, inspired a memorable journey. She personalized the tour to our questions and interests in the experience. We were also very impressed that Debbie cared for a comfort during the walk, EG inquiring if we needed anything at various points throughout the experience. We wholeheartedly recommend her. And

Debbie was amazing! Her passion and wealth of knowledge about the city, the events on 9/11 as well as how that tragic day continues to affect the people of New York made this tour better than expected. I would definitely recommend her!

Debbie our tour guide was amazing, so knowledgeable and got balance just right , walking , talking , observations . She made this tour . Thankyou Debbie and viator.

A very good and informative walking tour with great local knowledge from our guide. Small group of 12.

Patrick our guide was so informative and knowledgeable and super friendly. He made the experience enjoyable whilst giving us time to reflect on the seriousness of the reasons we were there. Couldn't fault the tour; great value for money and highly recommended :)

First, this is a memorial. It’s incredibly moving and well designed. Every detail of the architecture is thought out. It involves so much, including the Oculus, the pools, the names, the stones, the survivor tree, the museum, St. Paul’s Chapel, etc. Highly recommend. My young son, born after 9/11, learned so much, as did I.

Our tour guide Tim was amazing. He was so informative and answered all our questions.
He also gave us some great tips on where to go while visiting the city.
To top it off he not only showed us where and how to take the subway back to our hotel, he got on with us. A fabulous tour guide and a really nice guy!!

Tour is well worth it. Our tour guide was very knowledgable. Certainly a day to remember and this is the perfect way to do just that.

Take an in depth and meaningful visit to the 9/11 Memorial and World Trade Center area where your guide will point out details in the architecture and design of the area that you would never even think to look for on your own so you'll experience at the World Trade Center will be more meaningful and informative.  You'll visit The 9/11 Memorial, St. Paul's Chapel, Fulton Center, Fireman's Memorial, The Oculus and Brookfield Place and more.

Lower East Side Walking and Food Tour in Manhattan