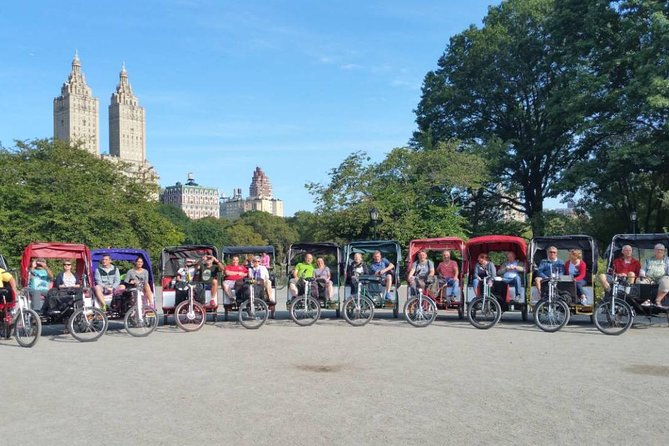 Official Central Park Tours is a union of experienced pedicab drivers with great knowledge about Central Park and New York City in general. We offer high quality, experienced sightseeing tours guides ready to make your trip in New York memorable.A pedicab is a bicycle with tree cycles very safe drive by a licensed driver. Going around Central Park with a pedicab allow you to fully explore the beauty of the park through its hop-one, hop-off guided tours.

- Confirmation will be received at time of booking
- Wheelchair accessible
- Stroller accessible
- Service animals allowed
- Near public transportation
- Infant seats available
- Transportation is wheelchair accessible
- Not recommended for travelers with back problems
- Not recommended for pregnant travelers
- Most travelers can participate
- This experience requires good weather. If it’s canceled due to poor weather, you’ll be offered a different date or a full refund
- This is a private tour/activity. Only your group will participate

Tavern on the Green

Street performers, naked cowboy and others

The most visited section in Central Park, the walking mall

Excellent tour by a well informed and friendly guide. Exceeded our expectations with detailed information of the Park and surrounding area. Terrific.

My sister and I took the Pedicab Tour through Central Park and thoroughly enjoyed it. Our driver, Abdul, was amazing! He was prompt, friendly, professional, knowledgeable and funny. He had us laughing quite a bit. We learned quite a bit about Central Park and some of the buildings surrounding the park. My sister and I highly recommend this tour and if you can get Abdul, I know you will have a blast!

I always wanted to visit Central Park in NYC to see all those spots I have seen plenty of times in Hollywood movies. But knowing the huge area of the Park which I didn't think I can cover by foot, I chose this relatively new Pedicab tour operator as this operator had the option of choosing 1.5 hours tour duration. I initially had a bit of trouble locating the pedicab operator. The entrance of Central Park was flooded with pedicab operators who swarm around you to take you for the ride. But I misread the start point and kept calling Abdul who was our tour guide and pedicab driver. He nicely guided me to the right spot and picked us up and took us to his designated starting point.

Abdul was an absolute professional and was extremely knowledge on the whole park and its history and was super athletic as he had to pedal the pedicab with the 3 of us for the entire 1.5 hours duration! He started off by giving us a high level idea about where all he was going to take us in the park, which sites we would be seeing in the duration of the tour and how much time each of the place would take. Knowing that I was trying to see as many locations possible where Hollywood films were shot, he understood the task at hand and we started the tour promptly. He had a very languid style of story telling which was both intriguing and mesmerizing at the same time. We went from once spot to the other, learnt the history behind each building on the way and loved the pace of the tour. We visited plenty of movie locations (like John Wick foundtain, Stuart Little lake, Serendipity ice ring), Robert De Niro and other famous personalities' penthouses and finally Strawberry fields and John Lennon's imagine memorial and the history behind it.

We loved the trip, perfect in duration and just enough to carry home treasured memories of Central Park and the surrounding history. And we really loved Abdul's commentary and engagement throughout the tour. I would highly recommend this tour to everyone who wants a tour of Central Park without walking for miles. I would surely engage Abdul and this tour operator again if I visit Central Park in future.

great experience and very informative tour. Gave me lots of options and time to check out sites. Nice pace and then took me back to my hotel.

Amazing tour.. we arrived half hour early and the pedicab was already there! We started early and the tour was great, saw everything we wanted to see from the 1 hour and half tour. The guide was fabulous, very entertaining and the time went so quickly. He took lots of pictures for us so we can remember it for years to come ☺️. Thank-you!!

Official Central Park Tours is a union of experienced pedicab drivers with great knowledge about Central Park and New York City in general. We offer high quality, experienced sightseeing tours guides ready to make your trip in New York memorable.A pedicab is a bicycle with tree cycles very safe drive by a licensed driver. Going around Central Park with a pedicab allow you to fully explore the beauty of the park through its hop-one, hop-off guided tours.