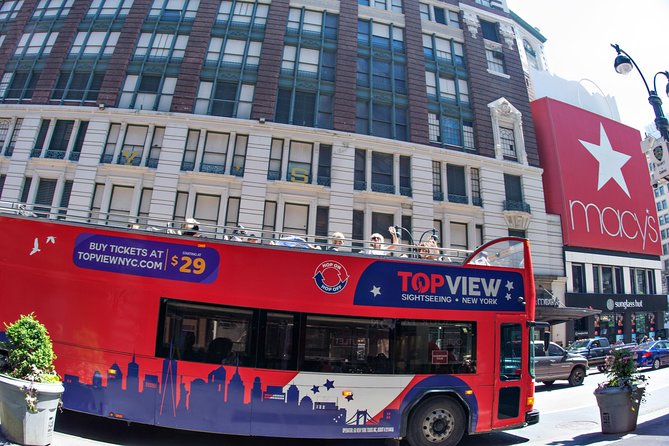 Explore New York City with one of our all-inclusive All City Pass! Enjoy the ease of unlimited hop-on hop-off by using the Downtown + Uptown Pass (Same Day), get extensive sightseeing experience with Limited City Pass (48 Hours), or fully experience the city with All-City Pass (48 Hours, 72 Hours, or 5 Days).

- Confirmation will be received at time of booking
- Wheelchair accessible
- May be operated by a multi-lingual guide
- This experience requires good weather. If it’s canceled due to poor weather, you’ll be offered a different date or a full refund
- This tour/activity will have a maximum of 999 travelers

This pass provides access to two hop-on hop-off bus tours: Downtown Tour and Uptown & Harlem Tour. On Downtown Tour, you will see Empire State Building, Times Square, Rockefeller Center, and other popular sites above the crowd. On Uptown & Harlem Tour, get a taste of nature and culture in the tranquil Central Park and its surrounding neighborhoods. With the option to hop on and hop off, you can spend as much (or little) time as you like at each attraction.

This pass includes Downtown Tour, Uptown & Harlem Tour, Statue of Liberty Cruise, and Central Park bike rental. With the included tours, you will have plenty of opportunities to explore the best of NYC and have a comprehensive sightseeing experience from land and water. Expect to see the Empire State Building, Central Park, Times Square, Statue of Liberty, SoHo, Guggenheim Museum, and more.

With All City Pass (48 Hours), you will get access to five bus tours (Downtown, Uptown & Harlem, Brooklyn, Bronx, Night Tours) around New York City as well as Statue of Liberty Cruise, Museum of the City of New York admission, and Central Park bike rental. All bus stops are conveniently located near major NYC attractions, so the hop-on hop-off experience is easy and hassle-free. On Statue of Liberty Cruise, enjoy panoramic views of the statue both indoor and outdoor.

With All City Pass (72 Hours), you will take full advantage of what NYC has to offer. From Downtown, Uptown & Harlem, Brooklyn, to Bronx, you will have the chance to explore the essential neighborhoods that distinguish themselves from one another with their own culture. At night, see the city glow with lights on the Night Tour. Enjoy the water views of Statue of Liberty, Manhattan skyline, Brooklyn Bridge and more on the Statue of Liberty Cruise. Central Park bike rental and Museum of the City of New York admission are also included.

With All City Pass (5 Days), you can explore NYC at your own pace and still get the most of your time in New York. The pass includes 5 bus tours (Downtown, Uptown & Harlem, Brooklyn, Bronx, Night Tours), Statue of Liberty Cruise, Museum of the City of New York admission, and Central Park bike rental. You will get to see NYC from different perspectives: on land, you will get above-the-crowd views on our double-decker buses, and immerse yourself in nature on a bike. From the water, you will get panoramic views of the Statue of Liberty, Manhattan skyline, and more. At night, be ready for the dazzling performance of lights and architecture.

We bought this pass for 48 hours, to take a tour in NY City Manhattan Uptown on the first day and Downtown on the Second day. We printed tickets at home in advance but they were not accepted by the bus driver therefore we needed to go 4 blocks to the main bus station to get vouchers printed by the supervisor. As it happened, he made a mistake and printed tickets only for 24 hours instead of 48 which we didn’t notice on the day so the next day we needed to go back to the same bus station again to get those vouchers reprinted. The same guy (Jason Giraldo) was far from apologetic but instead was rude and unfriendly even though it was purely his mistake. Along the route it wasn’t easy to find the right bus stop to hop back on the bus as map we were given wasn’t accurate. Overall we regret that we booked it and we would not recommend it to anyone. We only give 2 points because the views from the top of the bus were magnificent.

Explore New York City with one of our all-inclusive All City Pass! Enjoy the ease of unlimited hop-on hop-off by using the Downtown + Uptown Pass (Same Day), get extensive sightseeing experience with Limited City Pass (48 Hours), or fully experience the city with All-City Pass (48 Hours, 72 Hours, or 5 Days).

Statue of Liberty and Ellis Island with Optional Upgrades