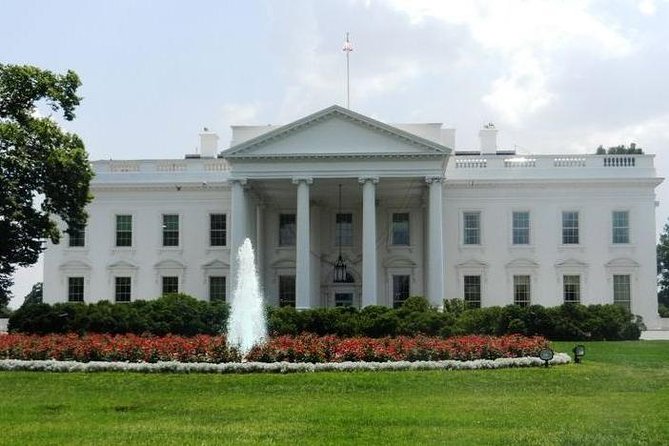 - Confirmation will be received at time of booking
- Wheelchair accessible
- Wheelchair accessible; please advise at time of booking if wheelchair assistance is required
- Depending on the rules on the day, sometimes a stop can be made for photographs from outside the fence
- Time at the Smithsonian National Air and Space Museum is approximately 1.5-hours
- For tours with fewer guests, vans may be substituted
- Tours can be bilingual/multilingual as they are offered in many different languages
- Children under the age of 2 are free, please advise at time of booking if infant is traveling
- Stroller accessible
- Service animals allowed
- Near public transportation
- Infant seats available
- Transportation is wheelchair accessible
- Due to security, there is no entry to the White House
- Travelers should have a moderate physical fitness level
- Due to security a passport or U.S. ID will be required to enter Arlington Cemetery
- This experience requires good weather. If it’s canceled due to poor weather, you’ll be offered a different date or a full refund
- This tour/activity will have a maximum of 54 travelers

Departing from New York and heading south, pass through the states of New Jersey, Delaware, and Maryland before arriving at Washington DC's Capitol Hill. Here, your tour will start with a stop at Arlington Cemetery to visit JFK's gravesite.

Next, head further into Washington to see the Capitol, Senate, and White House, the heart of the US government. Your tour then continues to the Smithsonian National Air and Space Museum before visiting the Washington, Lincoln, Vietnam, and Korean Memorials for exploration and pictures.

Late in the afternoon, you'll embark on a panoramic city tour before departing Washington for an early-evening arrival back in New York City.

Please Note: This tour is scheduled to stop in front of the White House, Capitol, and Senate for commentary and photo ops. However, please note that sometimes this is not possible due to security issues. In the event of this occurring, your tour will be adjusted accordingly.

Veterans of every American war from the Revolution to the country's most recent conflicts are buried at Arlington, which was officially declared a military cemetery in 1864. Among the more than 260,000 dead are three unidentified service members, buried at the Tomb of the Unknowns, and John F. Kennedy, whose gravesite is marked by an eternal flame.
Due to security a passport or U.S. ID will be required to enter Arlington Cemetery

The Capitol is among the most architecturally impressive and symbolically important buildings in the world. The Senate and the House of Representatives have met here for more than two centuries. Begun in 1793, the Capitol has been built, burnt, rebuilt, extended, and restored; today, it stands as a monument not only to its builders but also to the American people and their government.

One of America's most recognizable historical and political symbols is also the home and office of the President of the United States.

The most popular of the Smithsonian museums features the Wright Brothers' 1903 Flyer and Lindbergh's Spirit of St. Louis.

This memorial to Korean War veterans consists of the Pool of Remembrance and the triangular Field of Service depicting 19 soldiers on the field of combat.

This emotionally stirring memorial pays tribute to the men and women who served in one of America's most controversial wars.

"In this temple, as in the hearts of the people for whom he saved the Union, the memory of Abraham Lincoln is enshrined forever." Beneath these words, the 16th President of the United States sits immortalized in marble as an enduring symbol of unity, strength, and wisdom.

Really enjoyed this day trip to D.C. Good amount of time to explore and take photos. Tour guide Brian was excellent and kept us all informed and entertained! Would recommend to anyone visiting NY.

It was an an amazing tour to Washington DC. Everything ran like clockwork and was well planned. The tour guide was Jonathan was very knowledgeable and shared the rich history of American Independence, the founding fathers, the civil war, Arlington and Washington DC. It was an awesome tour and enjoyed by the whole family.

It is a big day, lots to see so an early start and late finish. For hubby and I this was the perfect 'whistle stop' tour of all the important and historic places that DC has to offer. Our guide had amazing knowledge as she conversed in both English and German. Just the right amount of information. Pick up and drop off was easy and there were stops for refreshments. Highly recommend.

The day trip was pleasant and cheerful.
We saw the highlights you need to see in Washington DC.
We had enough time to take our pictures.
The drivers/guides were friendly.

well organised and the guide gave a lot of interesting information. Despite of raining cats and dogs (which of course is beyond the control of the organizer :-) ) the trip was worth to do !

Thoroughly enjoyed this trip and especially our tour guide, Bruno. He was very knowledgeable and shared helpful tips with us. Keeping a large group of diverse people together for 14 hours (encountered an accident which delayed our trip) was a challenge in itself. Saw everything we hoped to see.

Washington trip was amazing, absolutely great , lovely guide Brian Montgomery , tell us and show us everything about Washington.. great organisation
If u think about take a trip , just choose this one , you will love it
Thank you for our trip

I will say that this bus trip from New York to Washington DC was well worth the money. So many facts and history were shared and this was a once in a lifetime trip to be able to see all of this in one day. My negative regarding the tour was our tour guide Eddie, I am sorry that I wasn't French as he seemed to explain everything and more to the French passengers and totally ignore the test of the bus. I was very disappointed that Eddie didn't interact with the other passengers as he did with the French passengers. I would not recommend Eddie for future tours unless his customer service to all patrons changes. This was our first trip to New York and Washington DC and was very unhappy with how we were treated.

It's a very long and packed tour, but that's the reason I picked this, trying to see the most within a very limited time, expect every stop to be extremely rushed. I was a bit worried before going since I read some comments saying it's a combined tour with same tour guide catering several groups speaking different languages, my tour had English/German/Japanese, but I think the tour guide handled fine, I didn't feel left out. We're left at the Air Museum for 2hrs but the museum was under huge renovation at that time and most part was closed down, we should have warned about this and offered some other alternatives to spend our precious time. Whether the long drive to and from DC worth a day trip really depends how much time you can afford, I'd highly recommend spending more than a few hours here, but I'm happy with the tour anyway.

VIP: NYC EmptyMet Tour at The Metropolitan Museum of Art

The Lion King On Broadway Ticket