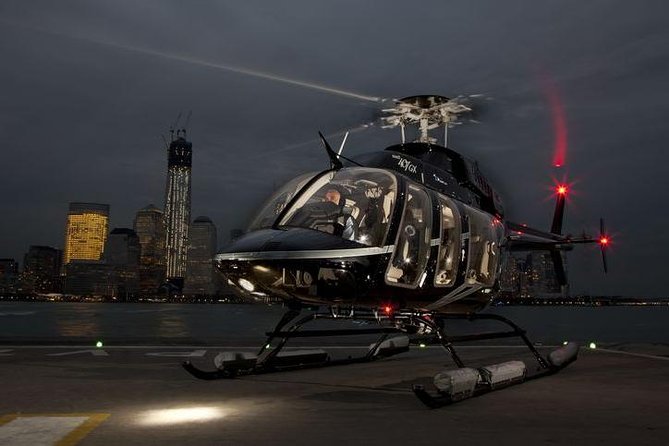 - Confirmation will be received within 48 hours of booking, subject to availability
- Due to comfort and weight / balance of the aircraft, passengers weighing over 275 lbs may be unable to fly. If passengers require a seat belt extender they will not be able to attend.
- A current valid government issued photo ID is required on the day of travel
- All bags are subject to inspection. Only camera, cell phone and sunglasses can be brought aboard. Complimentary lockers are available to hold belongings while flying
- Children must be accompanied by an adult. Infant rates apply for children under 2; infants will sit on their parents lap.
- Wheelchair accessible
- Service animals allowed
- Near public transportation
- Infants must sit on laps
- Most travelers can participate
- This experience requires good weather. If it’s canceled due to poor weather, you’ll be offered a different date or a full refund
- This experience requires a minimum number of travelers. If it’s canceled because the minimum isn’t met, you’ll be offered a different date/experience or a full refund
- This tour/activity will have a maximum of 6 travelers

Fly past the Chrysler Building.

Fly past the Empire State Building

Fly past the UN Headquarters

Fly past the West Village

Fly above The Met

Fly past the Statue of Liberty

Fly past The National 9/11 Memorial

Fly past the One World Trade Center

Fly past the Intrepid

Traveler pickup is offered
You may take NJ Transit which operates trains to Linden, NJ from New York Pennsylvania Station. 390 7th Avenue (between 32nd & 33rd Street & 7th & 8th Avenue)
Train lines to Linden: • Northeast Corridor (Red line) • North Jersey Coast Line (Blue line)
Round trip tickets can be purchased at the station for $17. Customer service staff is available from NJ Transit to assist you.
Linden is a local station, DO NOT take an express train.
Upon arrival at the Linden Station look for the Helicopter Flight Services Van which will be located near the handicap access ramp.

Great customer service, accommodating and friendly. The helicopter was clean and safe. The views were absolutely a life memory and worth the investment

The staff was friendly, funny and eased any anxiety immediately. From the second we were picked up to dropped back off. The pilot was hilarious with his commentary while noting facts while navigating the breathtaking views. Would recommend 100%

It was fantastic - the Pilot was coo and extremely safe. We loved it and our kids did. ABSOLUTELY RECOMMEND

Fantastic helicopter tour of New York at night.. absolutely magical.. will never forget.. pilot was very good at what he does.. abs the 2 lads at the base couldn’t have been more helpful, especially getting us back in time to the train station after our taxi mishap.. all round wonderful experience..

We did our Tour, one day after the big snowstorm in NYC. It was really tricky to come to the Linden Airport where the night tours starts. Every other train was cancelled and we arrive 1,5h later at Linden than we should have been there. We always stayed in contact with the operator and the were so nice and helpful and they always make sure that they will wait for us. So finally we came to Linden trainstation, our driver Steven picked us up there and brought us to the airport. We wait for 5 minutes and our flight started and it was awesome! If you never did a helicopter-tour, do the night tour that's amazing.
After landing Steven brought us back to the train station it had -15C - 5F but the first train was cancelled and then the second...
Steven was the nicest person ever, he offered us to wait in the heated car while waiting for a train. He already finished his work and could get home but he waited with us until finally a train came.
Thank you so much Steven!

The people were really friendly and professional and the pilot was very entertaining! Really wonderful views of New York at night, you get to see all the main attractions!

This was an AMAZING, very very well arranged trip. If you're thinking about a helicopter tour over NYC I highly recommend this one.
One day before your flight there is someone via email or phone helping you with the train to Linden New Jersey and if you're interested in a limousine service from Linden to the airport. You will get a recommendation for the train you need to take to be in time. Once you've arrived at Linden a limousine service will take care of you. They even called me to make sure you are on time and found your driver.
The flight took 28 minutes and was underlined by lounge music which I totally loved. You're able to see every sight of the big apple. Totally amazing! I've done other helicopter flights over NY and this was definitely the best!

We had to wait an hour after our allotted time. Pilot was super skilled! We got to see all the sites we wanted to see. The location is way out of the way though and trains aren't that often.

We had to go out of Manhattan in the New Jersey which is about 1hour trip, when we arrived we had a short breifing but we waited almost 1h before having the tour, no water offered and in the middle of nowhere the wait was were long. We were 12 person meaning 6 are in the border and have window and 6 are in the middle of the helicopter means you see Nothing and can't take pictures. My husband was ok because at the window but me and the other 6 in the middle paid for nothing....