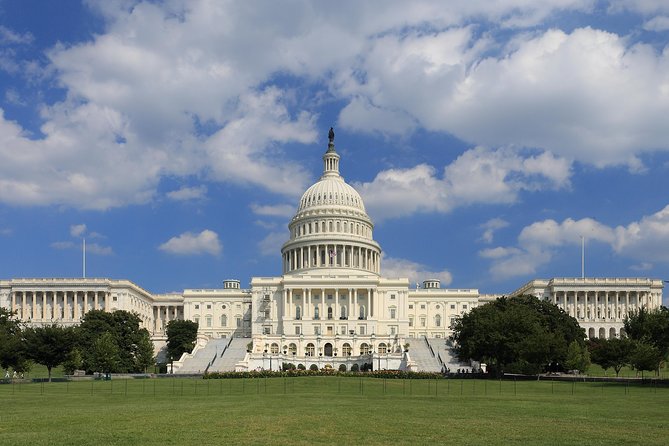 Venture off to our nation's capital on this New York to Washington DC day trip with all transportation and entrance fees included. Travel by Mercedes sprinter or coach bus to DC and visit iconic landmarks like the Vietnam, Korean and Iwo Jima Memorials, and Arlington National Cemetery. Stop at the White House and the US Capitol and have free time to explore the Smithsonian's Air & Space Museum.

- Confirmation will be received at time of booking
- Children under the age of 2 are free, please advise at time of booking if infant is traveling
- Tours can be bilingual as they are offered in both English and Spanish languages
- For tours with fewer guests, Mercedes sprinters may be substituted
- Stop at Smithsonian's National Air and Space Museum is approximately 1.5-hours
- Not wheelchair accessible
- Near public transportation
- Infants must sit on laps
- This tour stops at Arlington National Cemetery which effective immediately requires the guest to present a valid photo identification upon entry. Visitors 18 years of age and older must present a valid U.S. state or federal government-issued photo identification for entry. Visitors 16 and 17 years old who do not have a U.S. state or federal government-issued photo identification may present an official school-issued photo identification for entry. Persons who are not U.S. citizens must present a valid passport or U.S. State Department-issued photo identification for entry.
- Travelers should have a moderate physical fitness level
- This experience requires good weather. If it’s canceled due to poor weather, you’ll be offered a different date or a full refund
- This experience requires a minimum number of travelers. If it’s canceled because the minimum isn’t met, you’ll be offered a different date/experience or a full refund
- This tour/activity will have a maximum of 40 travelers

Enjoy a fascinating day at the Capital of the United States. Learn the history of the colonies, the American Revolution and the Civil War. See Capitol Hill home of the US Congress and learn about the structure of the U.S. government. Stop at the White House, home to the President of the United States and the West Wing. Visit the Lincoln Memorial, the Iwo Jima Memorial and Vietnam & Korean War Memorials to understand how these events changed the country. Visit Arlington National Cemetery where over 200,000 soldiers have been buried since the Civil War. Stop at the Kennedy grave site where two brothers are buried. Spend time at the Smithsonian’s Air and Space Museum, a monument to the technology of the twentieth century, whose exhibits include the Kitty Hawk, Spirit of St. Louis, command modules from space flights like Apollo 11, and more.

Enjoy the history, the politics, the beauty of the city and the amazing contrast to New York!

Pass by sometimes depending on the traffic

From pick up to drop off, our tour guide Marco was amazing, very informative and knowledgeable. He took time to answer questions and made everyone feel at ease. Stopped off at all the sites stated. Early start and long day but so so worth it.

Loved this tour Marcos was excellent! Easy to do central pick up location and would 100% do it again.

Great day out. Marcos and George looked after us very well. All information was interesting and clear. It a a long day but well worth it.

It is a very good and complete tour,even under the rain.our guide marcos very profesional,make from this tour an experience unforgetable,well done, rachel and roberto portugues

What an amazing tour!!! The guide Marcos was such a delight, full of information and engaging the whole day. The memorials were very moving and a blessing to be able to visit such historical places.
Highly recommend this tour. Thankyou Marcos for a great day.

Marco was a wealth of knowledge most friendly and accommodating. A fabulous day made easy and enjoyable with great bus driver And Marco
Thanks you for the experience
John and Lynne

Excellent and knowledgeable commentary by Marco with a good mix of videos. Safe and efficient driving by Joseph.
Thankyou. Would happily recommend to friends and family.

This tour was great, long journey on the coach but worth it. Am not sure why they give you more time at the Air and Space Museum than at any other of the sights. Not even sure why they go there.

Travel tour to Washington DC was a good experience and we were able to visit most of the federal historic govt buildings. The tour guide was knowledgeable about the history, answers questions not only Washington DC but also New York City. My only wish at least exploring inside the Capitol building could have been included.

Venture off to our nation's capital on this New York to Washington DC day trip with all transportation and entrance fees included. Travel by Mercedes sprinter or coach bus to DC and visit iconic landmarks like the Vietnam, Korean and Iwo Jima Memorials, and Arlington National Cemetery. Stop at the White House and the US Capitol and have free time to explore the Smithsonian's Air & Space Museum.