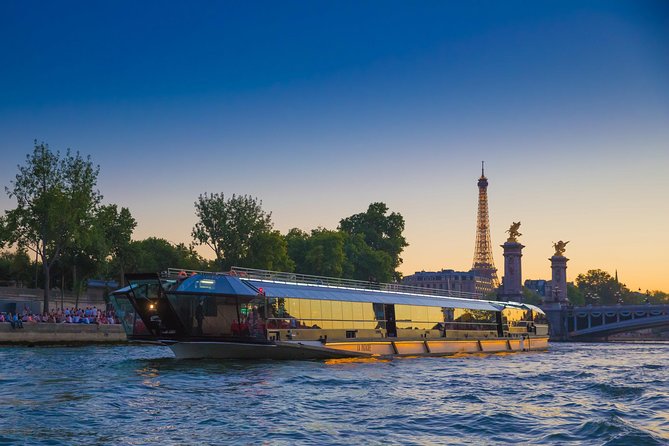 See Paris from the water on a 3-hour Seine River cruise on the iconic Bateaux-Mouches, which includes dinner. You'll admire the city's elegant architecture all lit up for the evening as you pass by landmarks such as Notre-Dame Cathedral and the Eiffel Tower. When booking, select from the Prestige or Excellence menus; you also have the option to select a holiday cruise, when available (duration may differ).

Please note that for groups (more than 15 people) a unique choice of menu is compulsory.

- Confirmation will be received at time of booking
- Dress code is formal
- If you fail to appear at the meeting point on time, there will be no refund issued
- Any supplementary order will be at additional cost
- This experience requires good weather. If it’s canceled due to poor weather, you’ll be offered a different date or a full refund
- This tour/activity will have a maximum of 15 travelers

Board the Bateaux-Mouches on the Seine River, and set off on your Paris dinner cruise.

On board, enjoy your select 4-course meal (choose your preferred menu option when booking), and relax while listening to live music and soaking up the view of illuminated Parisian monuments.

CHOICE OF WINE (1 bottle for 2 guests)

The boat along with the food were amazing. The live music created a wonderful atmosphere and the crew were very friendly whilst also being attentive, courteous and professional. Definitely recommend.

The only down side of the trip was that we didn’t get to do the normal route to Notre Dame due to high river levels.

Beautiful experience! The boat was above all my expectations - big, spacious, beautifully furbished and comfortable. Food was amazing as well and the cruise was beautiful even though the weather was bad. I would highly recommend this to everyone because it is unusual and cool way to experience Paris.

Fantastic choice of food, really great service and entertainment through the music. Would highly recommend the trip as an introduction to the sights of Paris too.

What a nice evening! The dinner, service, and views of Paris were wonderful. Well worth the money. One bit of advice would be to call and confirm the menu(s) for the night of your cruise.

This was a special experience . We have been to Paris before, howver doing the dinner cruise provided a different scense of Paris along with an excellent dinner. Live music, friendly and professional staff with excellent dinner. Would higly recommend this.

There was two of us, and we thought the experience was worth every penny. It was handicap accessible and was able to maneuver around the boat in the manual wheelchair perfectly fine. I would recommend this for anyone.

What a great evening. Didn't really know what to expect, but it certainly exceeded my expectations! The food was nice, and everything was so romantic. My wife loved it. Our server Alex, was so nice and genuine. Definitely the highlight of our trip.

Booked the cruise for Valentines night, as I thought this would be a very romantic event. There were a couple of issues initially. Boarding was late, so we were stuck standing around in a pretty crowded facility waiting for boarding....which happened about 30 minutes later than expected (2000 boarding, 2030 departure was more like 2030 boarding, and 2050 departure). My wife and I were among first couples embarked, and were led to a middle table on the ship. My tickets specifically guaranteed window seating, which middle row seating was not. Another couple encountered same thing....so we requested window seats that were guaranteed. This became a bit of a struggle....when the manager finally threw up his hands and said sit where you want. We did.

Other than that, the cruise was great. Food was good, wine and champagne was excellent, and entertainment was just right. Both my wife and I enjoyed the actual cruise quite a bit. I initially thought the price was a little expensive, but after eating in Paris for the next 6 days, I realize that it was not a bad deal at all considering the cruise and everything offered. We even could go outside and above the main deck to get views (and pictures) without window glare and reflection.

Was very easy to get to via cab, and only had to wait a couple of minutes after the cruise to take us back to the hotel.

Would recommend this cruise to others.....just make sure you are ok with whatever seating arrangement is advertised.

I am writing in regards to our experience we had last night on the cruise boat in Paris. First of all I would like to say the food was amazing and we truly enjoyed it, staff on the boat was very friendly but...
- It was difficult to find the actual boat as we were given wrong directions from the ticket office
- we didn’t get the guaranteed window seat which really upset me as it was one of the reasons why I placed that booking. I was told by staff to go back to the ticket office and talk to the manager. It wasn’t nice to run as the boat was ready to depart. Unfortunately he couldn’t help us and we were sat in the middle of the boat instead.
- as I mentioned before food was very tasty but the service was disorganised and messy for example people had finished their starters and we didn’t even received ours.
In addition there was one unfortunate couple that were waiting around to have table made up which on valentines night must have been humiliating in front of those who were already sat down.

It ment to be our special valentines night and I’m really upset it didn’t work out as it should.

See Paris from the water on a 3-hour Seine River cruise on the iconic Bateaux-Mouches, which includes dinner. You'll admire the city's elegant architecture all lit up for the evening as you pass by landmarks such as Notre-Dame Cathedral and the Eiffel Tower. When booking, select from the Prestige or Excellence menus; you also have the option to select a holiday cruise, when available (duration may differ).

Please note that for groups (more than 15 people) a unique choice of menu is compulsory.