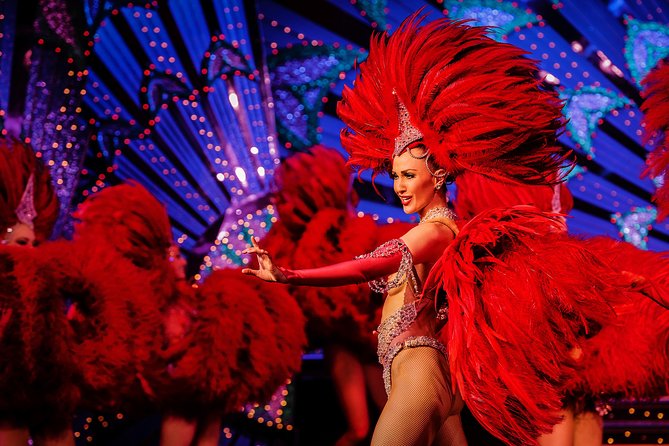 Enjoy an evening dinner show at the Moulin Rouge the number one show in Paris. With a choice of three different dinner menus, don't miss your chance to see the world-renowned showgirls and French Cancan dancers strut their stuff on the Moulin Rouge's historic stage. Moulin Rouge Paris sells out months in advance, so book ahead to avoid disappointment.

- Confirmation will be received within 48 hours of booking, subject to availability
- Elegant attire is required (tie and jacket not necessary) no shorts, no short-pants, no sport shoes or sportswear.
- All guests will be seated at tables of 6 - 8 people, a table for two is not available.
- Moulin Rouge is located in the northern part of Paris, within walking distance of Montmartre.
- Due to its popularity, you should expect to wait in line at the Moulin Rouge before gaining access. Moulin Rouge does not grant priority access to anyone. The seats are allocated 1 hour before performance time.
- Vegetarian option is available. Select the Toulouse-Lautrec Menu.
- Wheelchair accessible
- Near public transportation
- Most travelers can participate

Enjoy an excellent meal in the resplendent Parisian cabaret made famous by the paintings of Toulouse Lautrec. You have a choice from three different menus and a half bottle of Champagne is included.

After dinner, see the French Cancan performed in the Parisian home of the Cancan. You'll experience the magic of the Moulin Rouge's "Féerie" review and enjoy the essence of Parisian cabaret.

The Moulin Rouge's "Féerie" review features a troupe of 100 artists, including 60 legendary Doriss Girls, dressed in spectacular costumes of feathers, rhinestones and sequins. The sumptuous sets and vibrant light show of "Féerie" provide a colorful backdrop for brilliantly choreographed performances on moving staircases, in a gigantic aquarium, on swings and in garden settings.

Please be advised that this performance contains partial nudity, and may not be appropriate for all audiences.

We fully enjoyed our visit at the Moulin Rouge. Dinner was fabulous and the show was amazing. Totally worth it and I recommend the dinner and show tickets! Non stop fun!

Dinner and the show was everything and more. We loved it. I highly recommend seeing this famous show if you visit Paris.

This was an an amazing show! The dinner and the waitresses we’re excellent. The whole experience was fenomenal.

Fantastic show non stop entertainment costumes amazing .Dinner was also great and very fast, we felt it was worth the money.

The show was awesome, as good as the Rockettes and Broadway shows we've seen. Food was good and well presented. Really enjoyed everything about the evening.Well worth the money!!

The entire experience was everything we expected... Glamorous, elegant and a feast for the eyes. A "bucket list" check mark.

EXCELLENT show! This was our last night in Paris and we are so glad we went to this show. It was beyond our expectations! The theater is beautiful. The band/singers during dinner was great. Really got people dancing! Dinner was served promptly and all courses were delicious. We had the middle price range and were pleasantly surprised that we had choices for each course. Enjoyed the bottle of champagne that was included with our dinners. We sat alone for dinner but were joined by 2 other couples for the show.

We went to the Dinner and show. We were seated to close to the stage, I could put my elbow on the stage. Almost got kicked twice. Dinner was 2 hours with entertainment and the Dinner was not very good. The show started at 9:00 and was one of the best fun shows we have seen. In the future I would skip the Dinner and just attend the show as many others did.

I want to start with the seating. Me and my friend attended the show and we were seated right next to the stage, which was great. The downside was the table we were at was also part of the serving station for the waiters. We were forced to not only seat in tight quarters, but also surrounded by all of the plates of food that was being served. It was very uncomfortable. The dinner was ok. We had the chicken, which was a little dry. The show was pretty good. It was a variety of musical acts and acrobatic numbers. Even though it was very entertaining, it was quite long. Overall, it was a decent experience. I would recommend seeing the show without the dinner. The dinner really was not that good.

Food was okay. Table close to stage. Female dancers were topless. May have appreciated dance more if sitting in the back. Expensive. Walked out after second dance number. If dance was to appreciate the beauty of the body, why were the male dancers fully clothed? Information did not indicate 7 dinner was 2 hours before show started.

Enjoy an evening dinner show at the Moulin Rouge the number one show in Paris. With a choice of three different dinner menus, don't miss your chance to see the world-renowned showgirls and French Cancan dancers strut their stuff on the Moulin Rouge's historic stage. Moulin Rouge Paris sells out months in advance, so book ahead to avoid disappointment.

Dinner and Show at the Paris Moulin Rouge with Transport

Dinner and Show at the Moulin Rouge with Hotel Pickup

How to Become Parisian in One Hour: Comedy Show in English