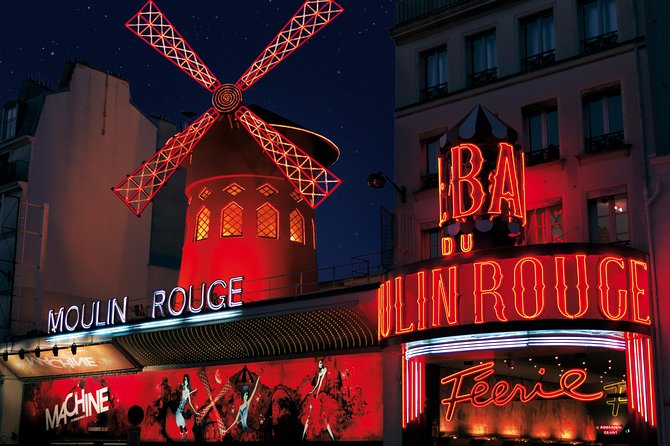 The Moulin Rouge is the number one show in Paris, if not the whole of Europe. No wonder it sells out quickly! Don't miss your chance to see the world-renowned showgirls and French Cancan dancers strut their stuff on the Moulin Rouge's historic stage.

- Confirmation will be received within 48 hours of booking, subject to availability
- It is strictly forbidden to photograph, film and record the show.
- Elegant attire is required (tie and jacket not necessary) no shorts, no short-pants, no sport shoes or sportswear.
- Moulin Rouge is located in the northern part of Paris, within walking distance of Montmartre.
- Vegetarian option is available. Select the Toulouse-Lautrec Menu.
- Due to its popularity, you should expect to wait in line at the Moulin Rouge before gaining access. The Moulin Rouge does not grant priority access to anyone. The seats are allocated 1 hour before performance time.
- Wheelchair accessible
- Near public transportation
- Most travelers can participate
- This experience requires good weather. If it’s canceled due to poor weather, you’ll be offered a different date or a full refund
- This experience requires a minimum number of travelers. If it’s canceled because the minimum isn’t met, you’ll be offered a different date/experience or a full refund

Moulin Rouge Paris sells out months in advance. If you'd like to see the Moulin Rouge show "Féerie" (105 minutes), pre-book your 9pm or 11pm tickets (including champagne!) here. For 110 years, the most legendary French cabaret has welcomed millions of spectators who have come to admire the famous French Cancan. Book ahead of time to avoid disappointment.

Le Moulin Rouge is world famous thanks to its French Cancan, and immortalized by the painter Henri de Toulouse-Lautrec. The sumptuous shows at the Moulin Rouge feature feathers, rhinestones and sequins, fabulous settings, original music and of course... the most beautiful girls in the world.

Many international stars have performed on stage at the Moulin Rouge including Ella Fitzgerald, Liza Minnelli, Frank Sinatra and Elton John. They have all put on exceptional shows, following in the footsteps of French celebrities such as Maurice Chevalier, Jean Gabin, Edith Piaf and Yves Montand.

Moulin Rouge Paris sells out every night. By pre-booking tickets you'll lock in the price, secure seats and get the most out of your precious vacation time in Paris.

Please be advised that this performance contains partial nudity, and may not be appropriate for all audiences.

The show was spectacular The sets, acts, the costumes and oh yes the men and women where super looking One nah a half hours of high charged entertainment In addition I was offered red, white or rosa wine instead of champagne I choose whit wine think I would get a glass of Chardonnay i as wrong I got a bottle of Chardonnay

Brilliant show and a fantastic performance highly recommend with the bottle of champagne. Best show I've ever seen.

I took my daughter to the 9pm show for her 30th birthday and we both loved it ,it was vibrant, beautiful, and entertaining

I booked this activity because it is well known around the world but I have no idea how incredible it would be. I don't have words to describe how amazing it is the show, it is simply magnificent! And the perfect complement champagne!

Great show I would recommend it for a night out in Paris. The red red light District where the theater is a must see as well.

What can I say... it’s iconic and a must do! The 11pm show was still very crowded, thankfully I’d purchased my tix in advance

We went to see the Feerie show at Moulin Rouge and it was a mostly enjoyable evening, from the swift and efficient service on arrival showing us straight to our seats to the dazzling dancers, seriously amazing acts and fun routines. However the low point for me was the use of live animals (snakes and small horses) in the routine which I found to be outdated and upsetting and this would prevent me from returning.

The lights, costumes and singing were great. Table service is poor, forcing guests to sit a certain manner. My boyfriend and I wanted to sit in front of each other. Apparently this is unacceptable. Choreography and lyrics were weak. was expecting more equality in terms of bodily exposure now that were in the 21st century.

We were moved into a large room that looked like the inside of an abandoned building. Bearing in mind they state to arrive at 10:30pm otherwise no entry and no refunds. There is no order, just everyone regardless of when you queue shoved into one room. Almost half hour of waiting, they finally started letting people in and it was like every man for himself. I was pushed, shoved, elbowed. Not the Moulin's fault but if there was a system, this wouldn't have happened. Finally got in at 11:25pm. Got our champagne which tasted awful. Sat with other people and the show finally started at 11:45pm!!! A subpar show. I don't know if they feel that because there are naked ladies on stage that they can get away with a wiggle but after the first round of boobs, it gets old fast. The male dancers are redundant, they did practically nothing other than a few lifts here and there. The in between acts were brilliant, juggler, contortionist and pole dancer, amazing. Costumes, fantastic, stage, amazing. However, as the majority of the show is naked ladies shuffling, if it wasn't for the in between acts, I would have been on Facebook 30 minutes in. The snake act I hated, seemed cruel to me. A naked women in a water tank picking up snakes, wrapping them around her and then throwing them? No... By the time the show finished, no public transport as we wanted and we had to fork out 90euro for a taxi. When I emailed the Moulin Rouge to express my disappointment, absolutely no word. I emailed Viator (whom I don't blame because it is not their fault), the Moulin Rouge simply said because we attended they would do nothing... EVEN THOUGH they stated they wouldn't give a refund anyway and how would we have been able to have a bad experience unless we attended the show? Makes no sense. Disgusting. They need to update their choreography, use the male dancers and have the women doing more. Start thinking about customer satisfaction rather than as soon as your pockets are lined with our cash, not caring at all. For a prestigious establishment like the Moulin Rouge, I was expecting a spectacular event but I left feeling so disappointed. 45 minutes late is unacceptable. I do amdram and we would never go up 45 minutes late. If a customer was unhappy, we would at least given them an apology if nothing else. So the fact Moulin Rogue, a professional company think this is acceptable and the attitude they have given me proves to me what kind of establishment they are.

The Moulin Rouge is the number one show in Paris, if not the whole of Europe. No wonder it sells out quickly! Don't miss your chance to see the world-renowned showgirls and French Cancan dancers strut their stuff on the Moulin Rouge's historic stage.

Dinner and Show at the Paris Moulin Rouge with Transport

Dinner and Show at the Moulin Rouge with Hotel Pickup

How to Become Parisian in One Hour: Comedy Show in English