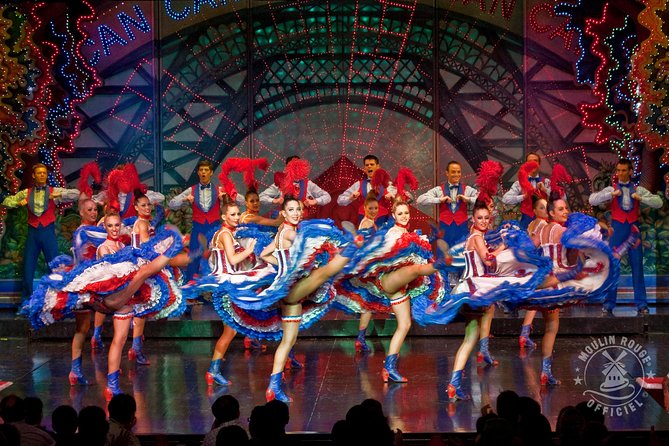 View the amazing sites of Paris from the Seine on a fully narrated 1 hour river cruise. Watch the Eiffel tower, Notre Dame, and more float by, then sip champagne as you take in a cabaret performance at the famous Moulin Rouge.

- Confirmation will be received within 48 hours of booking, subject to availability
- Not wheelchair accessible
- Seats are assigned by the theater box office and will not be known in advance of the performance date
- Dress code is smart casual. no shorts, no short-pants, no sport shoes or sportswear.
- Moulin Rouge show is not recommended for children under 16
- There is no commentary on the coach or at the Moulin Rouge

Start off your enchanting evening with a scenic cruise along the river Seine, embarking from the foot of the Eiffel Tower. The glassed-covered trimarans are perfect for amazing Paris views. Traveling leisurely down the river you will admire the sights of Paris including the Grand Palais, Louvre and the beautifully illuminated bridges. Take this moment to sit back and relax and learn about Paris’ rich history from your audio guide.

Then lights, music, thrills, and champagne await you at the world’s most famous cabaret, the Moulin Rouge. Established in 1889, the Moulin Rouge opened its doors with an audacious enticement “The Palace of dance and women !” A successful gamble for this famous cabaret that would become the Mecca for libertines, bohemians and artists, immortalized by Toulouse-Lautrec.  The Moulin Rouge is the birthplace of the Music-Hall, and world-famous thanks to its French Cancan ! Witness the “Féerie”, an incredible 2 hour show which features 100 artists on stage, feathers, rhinestones, sequins, luxurious sets… The Moulin Rouge truly is an unforgettable moment to be shared with family, friends or with your lover…

Its been raining a lot in France so, we were not able to go in the Seine river cruise due t the level being too high. Moulin Rouge was great! our guide picked us up at hotel, gave us vouchers to go in and was already waiting for us when we came out. Great show! A must see!

I was only in Paris for 1 night and I am so happy I chose this tour. One of the most memorable parts was not even the tour itself, but the incredible people who were part of the tour. Our guide was Herve and he was the nicest, most kind person who went out of his way constantly to make sure we were pleased and well taken care of. On our way to the Seine River and the Moulin Rouge then back to our hotels, Herve explained SO much amazing history about Paris and had the most incredible attitude. My tour mates were the most fun-outgoing couple from Australia- Anne and John. We had so many laughs and Herve even drove us to go see the Sacre Couer after the Moulin Rouge show.

Even though it rained the whole time on the Seine river cruise, it was still an amazing experience. Being in that setting with sunset was just perfect. Then when the Eiffel Tower began to light up right when we were finishing the cruise it was breathtaking. If it couldn't get better then the Eiffel Tower light show began just as we ended the cruise.

I was skeptical about the Moulin Rouge and was told it was going to be a cheesy knock off of Cirque du Soliel. The beginning did feel a little that way, but very soon after it transformed into an indescribable form of entertainment! The acts with live pythons, and roller skaters, gymnasts, and giant hoola hoop acrobatics were simply incredible. The costumes and singing were out of this world. It was by far one of the most entertaining shows I have ever seen. I would highly recommend this show, even if you just go with an open mind for the experience of being at the Moulin Rouge. I loved every minute!

Harvey our guide was great! He made everything easy
And interesting. Got nice tips for the cruise and the show.
We were picked up and on time and had plenty of time for
Pictures without feeling rushed. Cruise, Show and tour was
Terrific. Highly recommend.

We enjoyed a terrific time on this tour. The Seine River cruise was perfect. We were able to be wherever the best picture needed to be taken from either inside or outside the boat. The tour recording was interesting and easy to understand. The show at the Moulin Rouge was excellent. The bottle of champagne was delicious as well. All around, a very entertaining few hours.

When looking at the booking, we were told to be at a central agency by 5:45 for our Seine Cruise and then on to Moulin Rouge. When we arrived, we were told we really didn't need to be there until 6:30 at the earliest. After complaining to the agency about the time, they suggested we write a review with Viator who they said has miscommunication frequently on starting times. We just arrived by train and rushed to be at this agency on time, only to discover we had an additional 45 minutes to sit around. Communication would have been better if we were told the correct time to show up for our tour.

View the amazing sites of Paris from the Seine on a fully narrated 1 hour river cruise. Watch the Eiffel tower, Notre Dame, and more float by, then sip champagne as you take in a cabaret performance at the famous Moulin Rouge.