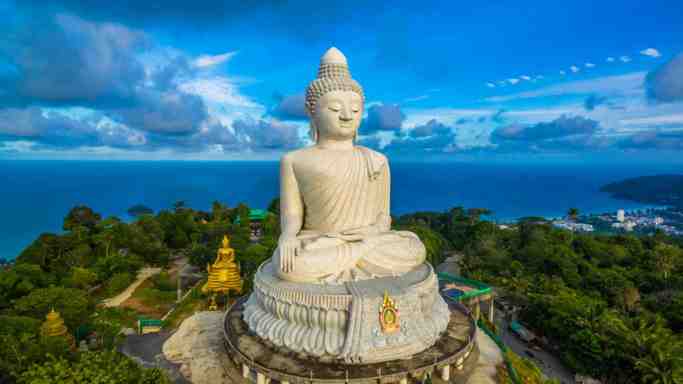 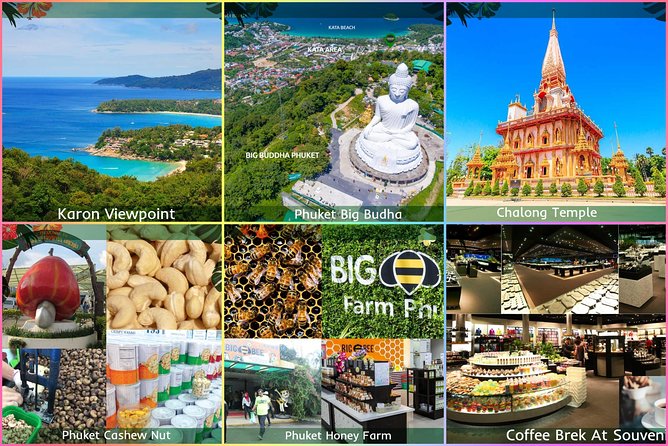 We take you to main of attraction places around Phuket. You will sightseeing with beautiful landscape view of Phuket.

Also known as Three-Beach Viewpoint as once you reach its peak perched in the south of Kata Beach, in front of you is the breathtaking view of beautiful Kata Noi, Kata and Karon beaches as well as the deep-blue Andaman sea. The viewpoint is located along the ring road, half-way between Nai Harn Beach and Kata Noi Beach.

Phuket Big Buddha, or The Great Buddha of Phuket, is a seated Maravija Buddha statue in Phuket, Thailand. The official name is Phra Phutta Ming Mongkol Akenakiri, shortened to Ming Mongkol Buddha. Sitting atop Nakkerd Hill near Chalong, construction began in 2004. Expansion of the base was ongoing as of 2015

The most important of the 29 buddhist temples of Phuket is Wat Chalong (Thai: วัดฉลอง) or formally Wat Chaiyathararam (Thai: วัดไชยธาราราม), located in the Chalong Subdistrict, Mueang Phuket District. It is dedicated to two highly venerable monks, Luang Pho Chaem (หลวงพ่อแช่ม) and Luang Pho Chuang (หลวงพ่อช่วง), who led the citizens of Chalong Subdistrict fighting against the Chinese rebellion in 1876 and with their knowledge of herbal medicine helped the injured.
The large market at Wat Chalong extends into the grounds of the temple and features amplified pop music and Thai-fighting advertisements.
The temple sells trinkets to visitors and the monks assist by storing boxes of items in their main prayer hall.

Old Phuket Town, is an area of historical interest in Phuket City. The main streets of Old Phuket Town are Thalang, Phang Nga, Krabi, Dibuk, and Yoawarat. Old Phuket Town is noted for Sino-Portuguese buildings on both sides of the street. Many old buildings have been converted into shops, hotels, restaurants, and museums.

We take you to main of attraction places around Phuket. You will sightseeing with beautiful landscape view of Phuket.