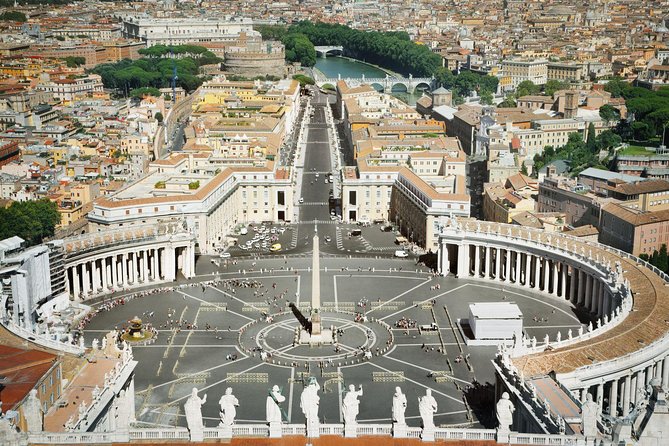 Visiting Rome in one day may seem like an impossible mission. There is so much to see that it can be overwhelming deciding which sites are the most important. Not to mention all the time you can waste, navigating the public transport system and standing in line for the most famous attractions like the Colosseum and Vatican! With this private tour, you will maximize your time, focusing on Rome’s greatest hits: Colosseum, Roman Forum and Palatine Hill - Spanish Steps, Trevi Fountain, Pantheon and Piazza Navona - Vatican Museums, Sistine Chapel and St. Peter’s Basilica. We will provide you skip the line access for all the sites, a gourmet Italian lunch, an expert private guide and a private luxury transfer to ensure your visit is interesting and time-efficient.
Buy this tour and you will try the perfect mixture of the many layers of Rome in a day!

- Confirmation will be received at time of booking
- Infant seats available
- Near public transportation
- Stroller accessible
- Not wheelchair accessible
- Remember to cover knees and shoulders before entering the Sistine Chapel and the Basilica
- Most travelers can participate
- Please, communicate if there are disabled people partecipating the tour. This is because, from the Sistine Chapel to St. Peter's Basilica, it is necessary to descend 50 steps that are not wheelchair accessible. Therefore, it will be possible to enter the Basilica without variances on the tour only if all members of your private group will be able to access the route or if other participants will take charge of pushing the wheelchair and carry it down the stairs; if not, the tour will end without the visit of the same or you will have to reach it from the outside in about an hour. This last option will include an additional charge of € 50,00 for the extra guide service.
- The order of the visited sites could be reversed, especially for tours booked very close to the date of the experience
- This is a private customizable tour
- This is a private tour/activity. Only your group will participate

After the pick-up at your accommodation, the driver will take you to the Colosseum where you will meet your private guide. Known as Flavian Amphitheatre, the Colosseum is one of the capital's most remarkable monument. It is an imposing construction that, with almost 2,000 years of history, will bring you back in time to discover the way of life in the Roman Empire. During that period, the Colosseum allowed more than 50,000 people to enjoy its finest spectacles. The exhibitions of exotic animals, the execution of prisoners, the recreations of battles and gladiator fights kept Roman people entertained for years. After the Colosseum, your time travel will continue with the spectacular ruins of the Roman Forum – the hub of ancient Rome. Here's where rousing political speeches were made, criminals were sentenced, goods were traded and where angry crowds assembled. The site, originally a marshy burial ground, was first developed in the 7th century BC, growing over time to become the social, political and commercial hub of the Roman empire. Signature sights include the Arch of Septimius Severus, the Curia, the Temple of Saturn and the Arch of Titus. At the end of this first part of the tour, you will reach the Palatine Hill, the most central of seven hills of Rome. In the Palatine Hill, you can see hundreds of ruins of the imposing buildings that were created for high Roman society in ancient. For a fresh perspective on Rome and its history, there’s no better place than the Palatine!

You will start the second part of the tour with proceeding to the Spanish Steps, one of the must-see places when in Rome and a great example of Roman Baroque Style. With its irregular butterfly design, the beautiful “Scalina Spagna” is a great place to just sit down, enjoy the atmosphere and views of the Eternal City. The Spanish Steps are a wide irregular gathering place consisted of 138 steps placed in a mix of curves, straight flights, vistas and terraces. They connect the lower Piazza di Spagna with the upper piazza Trinità dei Monti that, with its beautiful twin tower church, dominates the skyline. At the lower end of the stairs, you can find an early baroque fountain called Fontana della Barcaccia, or “Fountain of the Old Boat”. It was creatided by Pietro Bernini, a member of the renowned artist family Bernini and father of famous Baroque artist Gian Lorenzo Bernini. The fountain has the form of a sinking ship and it is said to be based upon a folk legend according to which a fishing boat was carried all the way to this exact spot during a massive flood of the Tiber River in the 16th century. The design with the sinking boat also helped Bernini to overcome a technical problem, due to low water pressure.

With your guide, you will walk towards the Trevi Fountain. Located in the Quirinale district of Rome, the Trevi Fountain is known as one of the most stunning fountains in the world. It is a fantastic work of art that is much more than a mere sculpture. This triumphant example of Baroque art with its soft, natural lines and fantasy creatures embodies movement as the soul of the world. In this creation, the architecture itself seems to come alive with the current of the revitalising waters. This work of art is so famous that even cinema has commemorated it on more than one occasion. Everyone remembers the scene in the renowned Italian film, "La Dolce Vita" by Fellini: on a quiet night in an almost unreal Rome, an alluring Anita Ekberg jumps into the Trevi Fountain with her clothes on and invites Marcello Mastroianni to join her. There is also another curious tradition regarding the Trevi Fountain: it is said that if you throw a coin over your shoulder into the water, you will be sure to return to Rome. An estimated 3,000 euros in coins are thrown into the fountain every day.
Don't miss this true wonder, a jewel of water and stone!

The tour will continue with a visit to the Pantheon. Even today, almost 2000 years after its construction, the Pantheon is a remarkable building to see. The spectacular design, proportions, elegance and harmony are a striking reminder of the architecture of the great Roman Empire. When Michelangelo saw this wonder for the first time he said that it looks more like the work of angels, not humans.

You will then visit Piazza Navona, considered one of the most beautiful squares in Rome. It displays the genius of Bernini, Borromini and Giacomo della Porta, with its church and the three amazing fountains: the Fountain of the Moor, the Fountain of Neptune and, in the middle, the Fountain of the Four Rivers. The Fountain of the Four Rivers, which is considered Bernini’s masterpiece, consists of four figures, each representing a river, from the four continent known by those times: Nile (Africa), Ganges (China), Danube (Europe) and Rio della Plata (The Americas). Constructed between 1647 and 1651, the design was first commissioned to Borromini, but was later taken over by Bernini. Right across the middle fountain, you can find the impressive Sant’Agnese in Agone Church, designed by Borromini and dedicated to the young Christian virgin Agnese, who was executed at the site of the church because of her beliefs.

The third part of the tour starts with the Vatican Museums, considered among the most beautiful museum complexes in the world. Equipped with one of the most beautiful art collections on the planet, they are rich invaluable works of Greek, Roman, Egyptian and Etruscan antiquity. They house a valuable collection of paintings ranging from the twelfth to the nineteenth century, with works by Raphael, Caravaggio and Leonardo da Vinci. The Museums also include some beautifully frescoed rooms such as: Raphael's Rooms, four rooms used by Pope Julius II as his residence decorated by Raphael; the art gallery containing paintings by Giotto, Leonardo, Caravaggio and Bellini, sculptures of classical art and masterpieces by Bernini, tapestries and mosaics; the famous Sistine Chapel, (named after its founder, Pope Sixtus IV) that the extraordinary genius of Michelangelo has made it one of the most celebrated artistic treasures in the world, visited every day by 20,000 visitors. The frescoes of the Creation and the Last Judgement (on the wall of the altar) are considered among the greatest and most intense masterpieces of art history. In the face of such beauty, how can we not agree?! We will continue towards St. Peter's Basilica, built in the sixteenth century, entering through a hidden door from which only participants in organized tours can access. You can admire the "Pieta" by Michelangelo and then move on to other works, such as the famous canopy by Bernini. The largest Christian Basilica in the world leaves everyone who visits it fascinated. At the end of the tour, thanks to the genius of Bernini, the colonnade of St. Peter's Square offers a magnificent glance: positioning, in fact, on the disks of porphyry in the square you can see all the columns perfectly aligned one behind the other as if, by magic, they had moved.

NOTE: On Wednesday morning, due to the Papal audience, the Basilica might be closed. In this case, the explanation of it will be done from outside.

Traveler pickup is offered
We pick-up from any central hotels/apartments/B&B in Rome. If it is not central (a ray of about 8 km from the Pantheon), let us know its location and we will ask a supplement for the extra distance.
If your accommodation is not mentioned, during the booking, please provide details regarding its location.
If your accommodation has not been booked yet, you will modify the booking later by providing the data relating to it.
You can also choose the pick-up option from the Civitavecchia Port or from Fiumicino Airport. In this case, please provide arrival and departure times to arrange the pick-up and drop off.
Kindly add to your booking an email address you can check frequently. If you do not receive further messages, by mobile phone or by email, default pick up time is confirmed.

Visiting Rome in one day may seem like an impossible mission. There is so much to see that it can be overwhelming deciding which sites are the most important. Not to mention all the time you can waste, navigating the public transport system and standing in line for the most famous attractions like the Colosseum and Vatican! With this private tour, you will maximize your time, focusing on Rome’s greatest hits: Colosseum, Roman Forum and Palatine Hill - Spanish Steps, Trevi Fountain, Pantheon and Piazza Navona - Vatican Museums, Sistine Chapel and St. Peter’s Basilica. We will provide you skip the line access for all the sites, a gourmet Italian lunch, an expert private guide and a private luxury transfer to ensure your visit is interesting and time-efficient.
Buy this tour and you will try the perfect mixture of the many layers of Rome in a day!

Rome by Night with Pizza and Gelato