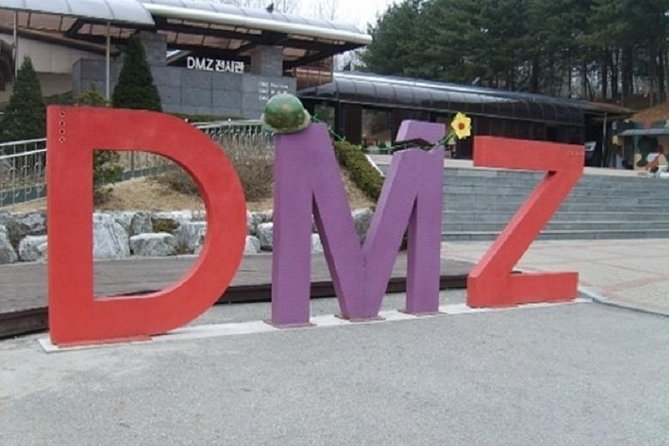 Learn about DMZ Area, as you sightsee with a knowledgeable local guide.Travel by coach to several stunning landmarks in DMZ Area, including Imjingak Park and the DMZ Theater & Exhibition Hall, Dora Observatory. During your 4.5-hour morning tour, gape at the Korean Demilitarized Zone, and learn about Korean War (1950-1953) divided the Korean Peninsula into South and North Korea. Hotel pickup is included, with drop-off at City Hall or Itaewon, leaving you a free afternoon to explore more on your own.

- Confirmation will be received at time of booking
- Not wheelchair accessible
- Passport is needed on the tour day
- Near public transportation
- Infant seats available
- Travelers should have a moderate physical fitness level
- *** The Korean Demilitarized Zone is temporarily closed due to 'African Swine Flu' , until the further notice from the government . *** The alternative tour itinerary : Hotel Pick up – Imjingak (Mangbaedan, The Bridge of Freedom, Bell of Peace, Dokgae Bridge, Beat131 Bunker Exhibition Hall) - Odu Mt. Unification Observatory (Observatory, North Korean Life’s Museum) - War Memorial of Korea (Korea War Museum) - Drop off at Itaewon or City Hall area.
- This experience requires good weather. If it’s canceled due to poor weather, you’ll be offered a different date or a full refund
- This tour/activity will have a maximum of 40 travelers
- Face masks required for travelers in public areas
- Face masks required for guides in public areas
- Hand sanitizer available to travelers and staff
- Gear/equipment sanitized between use
- Transportation vehicles regularly sanitized
- Guides required to regularly wash hands
- Regular temperature checks for staff
- Paid stay-at-home policy for staff with symptoms
- We are putting the best effort to prevent The Corona-19 for our customer's safeies and concerns. - Disinfecting & Sterilizing frequently. - Attach the Corona-19 Prevention guidelines on the transportation.

This park was built to console the refugees who left North Korea during the Korean War.

**Due to the "Africa Swine Fever" at Paju area.
We will be visiting "Dokgae Bridge, Beat131 Bunker Exhibition Hall"

The third tunnel was discovered in October 1978, which is only 12km from Munsan and 52 km from Seoul

**Due to the "Africa Swine Fever" at Paju area.
We will be visiting "Mangbaedan, The Bridge of Freedom, Bell of Peace"

See the DMZ check points of North Korea, small villages nearby and even Gaeseong Special City from the Dora Observatory.

**Due to the "Africa Swine Fever" at Paju area.
We will be visiting at Odu Mt. Unification Observatory (Observatory, North Korean Life’s Museum)

Dorasan Station is the northernmost station of the South Korea which is 700m distant from the southern boundary line of DMZ, the civil control zone.

**Due to the "Africa Swine Fever" at Paju area.
We will be visiting at the War Memorial of Korea (Korea War Museum)

Fantastic tour with an outstanding tour guide, Sunny on the alternative DMZ tour (as the JSA is closed by the government)

Even though the DMZ was closed, we had a great time! My sister and brother in law came in and were still able to see the Imjingak Park with Dokgae Bridge and Beat 131 Bunker Exhibition Hall. We also went to the Mt. Odu Unification Observatory where we were able to view daily life in N Korea. Then our tour guide took us through the first floor of the War Memorial Museum. The tour guide was very knowledgeable and friendly, and was also super helpful when we told her what our plans were for the rest of the day. I feel like the tour company has tried to make the best of a bad situation and still gives you a good experience and background of the Korean War, the DMZ, and the possibility of a unified Korea.

Grace our Tour Guide was excellent! The DMZ was closed when I was there but the alternative was brilliant. Great value for money

Unfortunately, we were not able to get the complete DMZ experience because the DMZ was closed due to a swine flu fear. That was a bummer but the alternative tour provided was still very interesting. I would need to come back again one day for the full tour but still a great experience overall.

We thoroughly enjoyed this “demarcation line” tour after initially being disappointed that the DMZ tour cancelled as the area was closed due to swine flu. This alternate tour was engaging and enjoyable for us and the children. Our tour guide, Pogan was incredibly detailed and engaging in her delivery of the history of Korea. She provided lots of interesting facts and anecdotes about Korean history and culture. She answered all our questions and had a lovely approachability. The other passengers were also lovely and friendly. We booked another tour with this company right after this tour!

Moon was an Amazing guide, she gave personal detail and story vividly portray the horror of the history behind DMZ. Many places , stops are historically significant
Great story telling, excellent guide !!!!

The Tour was altered due to Swine Flu concerns to the MDL but the Guide was excellent in telling us all sorts of information and stories about the DMZ, the MDL and the Korean War and post the Korean War. Jane was terrific. The stops on the tour were just right not too long not too short. We saw the bleak North and knew why we are lucky to be in the Democratic and Higher Tech SK!

We ended up doing a alternative tour as there is pig swine flu at the Dmz zone, but the tour they did put us in with the observatory and the friendship bridge was very enjoyable for my wife and myself. Our guide Amy gave us so much information as well would recommend to anyone.

We had a great time learning about the history of the DMZ, and our tour guide Jennie was very informative! We spent time in three locations - the bridge and bunker located adjacent to Unity Bridge, an observation tower from which you can see North Korea, and the War Memorial and Museum. The tour itself was well executed, and felt like a good pace to see the sights and main historical stops. I would recommend this trip, however would note that you're not able to go into the DMZ itself, or main tunnel due to a Swine Flu outbreak, which may be the highlight for some interested in visiting the DMZ.

Because of the African Swine Fever, we had a modified tour and were unable to visit the DMZ. We knew this in advance and accepted the alternate itinerary. All in all, we enjoyed the tour, but we felt very rushed throughout the day as we were not able to explore anything in depth. As it takes about an hour by bus to get to the attractions in the DMZ area, we would have preferred more time at these attractions instead of an hour of our tour being allotted to the War Memorial of Korea in Seoul. We felt that this should have been the drop-off point at the end of the tour. Guests could then choose if they wanted to get off the bus and spend time at the War Memorial museum or continue on the bus to get dropped off at City Hall.
Side note: We ended up spending the whole afternoon at the museum . It was fantastic.

Learn about DMZ Area, as you sightsee with a knowledgeable local guide.Travel by coach to several stunning landmarks in DMZ Area, including Imjingak Park and the DMZ Theater & Exhibition Hall, Dora Observatory. During your 4.5-hour morning tour, gape at the Korean Demilitarized Zone, and learn about Korean War (1950-1953) divided the Korean Peninsula into South and North Korea. Hotel pickup is included, with drop-off at City Hall or Itaewon, leaving you a free afternoon to explore more on your own.

Day Trip to Nami Island with The Garden of Morning Calm