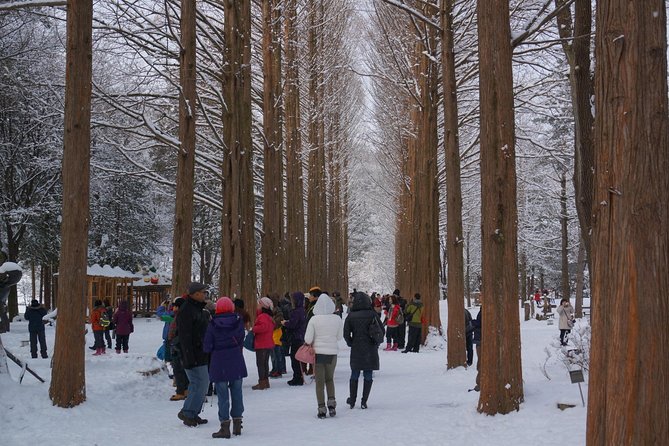 We bring you to Nami Island and Petite France or The Garden of Morning Calm, Which is very famous for the K-drama making and its own scenery

• Can listen to all the useful information such as politics, religions, society, culture and nature of Korea while traveling from full of knowledgeable driving guide

● One of the most famous tourist destinations in Korea

● In the past, Nami was young people visiting place for a date, and now it has become an international tourist attraction that foreigners often visit after the Winter Sonata aired in 2003

Namiseom Island was formed as a result of the construction of Cheongpyeong Dam. It is a half moon-shaped isle, and on it is the grave of General Nami, who led a great victory against the rebels in the 13th year of the 7th king of the Joseon Dynasty, King Sejo (reign 1455-1468).

Namiseom Island is 63 kilometers away from Seoul in the direction of Chuncheon, and is famous for its beautiful tree lined roads. The island is 30 minutes away from Chuncheon and an hour away from the suburbs of Seoul. Since it is not far from Seoul, many couples and families come to visit.

A special feature of Namiseom Island is that there are no telephone poles. This is because all electric wires were built underground to keep the natural feeling of the landscape. The island is 553,560 square yards with chestnut trees and poplar trees throughout.

In the middle of the isle, there is a grass field about 316,320 square yards. It features education and training facilities and camping sites. The island also has a swimming pool and water-sports facilities for motorboats and water skiing, as well as a theme park with a merry-go-round, shooting range, and roller skating rink. Lodging facilities such as resort villas and bungalows are available for visitors to stay on the island.

● Korean Drama and Show making place: Korean dramas and TV shows have been made here, making this place even more famous.

After traveling 10 km along the lakeside road from Cheongpyeong Dam, in the direction of Namiseom Island, you will come across a cluster of white, exotic buildings on the left-hand hillside. From its outward appearance, it would appear to be a village that belongs on the Mediterranean coast or in a pastoral area of the Piedmont Alps. This is Petite France, a French cultural village set in the Korean countryside! Petite France serves as both a French cultural village and a youth training facility (Goseong Youth Training Center), and consists of 16 French-style buildings where visitors can lodge and experience French food, clothing, and household culture.

The concept of Petite France encapsulates ‘flowers, stars, and the Little Prince.’ The village contains a memorial hall dedicated to Saint-Exupery, the author of the celebrated French novel, Le Petit Prince (1943) and as such it is called the Little Prince theme park. It also has a gallery displaying sculptures and paintings of le coq gaulois (the Gallic rooster), the national symbol of France; Orgel House where a 200-year-old music box plays a sweet melody; a shop that sells herbal and aromatic products; a souvenir shop; and many other locales where you can experience French culture. The village can accommodate up to 200 visitors with 34 guest rooms that hold four to ten people each. Enjoy the marionette experience and hear percussion instruments from around the world, and also enjoy soap bubble experience.

● Artificial Arboretum where you can feel the beauty of Korean garden

● You can enjoy beautiful Korean flowers in every season

● The Garden of Morning Calm is a famous tourist attraction in this area along with Nami Island and Petite France.

Introduction
The Garden of Morning Calm, a 30,000㎡ garden, is open year-round and is a great spot to visit for families, couples, and photographers alike. The garden was conceptualized by Professor Han Sang-kyung (Gardening Department, Sahmyook University) while he was serving as an exchange professor in America. His vision was to create a garden that would become world-famous and spread the concept of Korean beauty throughout the world. The inspiration for the garden stemmed from a poem written by Sir Tagore, a great Indian poet, who described Korea during the Joseon Dynasty as "The Land of the Morning Calm."

The garden is the oldest private garden in Korea. It is an artistic space with a beautiful balance between the Korean concept of natural curves with asymmetry, and plants with synthetic materials, attracting about 600,000 visitors annually.

Scenic walkways, beautifully manicured grass, and flower beds connect the garden's 20 different themed sections. The Sunken Garden is shaped like the Korean Peninsula and is carpeted with beautiful flowers on both sides representing the desire for South and North Korea to be reunited. It is easily one of the most popular and meaningful attractions at the garden.

The garden houses about 5,000 kinds of plants, including 300 varieties native to Baekdusan Mountain, known as a spiritual mountain to the Korean people. Flowers are in bloom from March to November, so the garden is usually busy during this period. In addition to the beautiful foliage of the garden, there are a variety of festivals and displays held throughout the year.

Traveler pickup is offered
We will pick up tourist from Seoul hotel, motel and BnB by their request.

And Drop them off same place we picked up or somewhere in Seoul area that tourist want to be dropped.

The private tour from Seoul to Nami Island we signed up for was wonderful!! An experience that exceeded our expectations, due largely to our excellent guide/driver Chance Kim. He texted me a day prior to departure to confirm the time and place of pick-up. Showed up right on time the next morning with his cheerful personality ready to roll. His superb insight into Korean as well as the western culture made him an exceptional conversationalist en route to our destination. His wise suggestion of an early morning start avoided the crowd, along with a fortuitous light-dusting of snow from previous night made Nami Island a magical place few visitors get to experience. We were also please with Mr. Kim's flexibility in dropping us off at an out-of-the-way place on our return trip to the city. Mr. Kim is an avid hiker and had led many day-hike trips around Seoul mountains. We would definitely sign up for one of his hiking trips next time when we visit Seoul.

Chance Kim is an excellent guide - friendly, helpful and knowledgeable. He made the trip very enjoyable. Communication is a breeze as he speaks very good English. He also drives safe with very comfortable transportation. Would highly recommend.

We bring you to Nami Island and Petite France or The Garden of Morning Calm, Which is very famous for the K-drama making and its own scenery

• Can listen to all the useful information such as politics, religions, society, culture and nature of Korea while traveling from full of knowledgeable driving guide

Day Trip to Nami Island with The Garden of Morning Calm

DMZ tour - Small-group and No Shopping