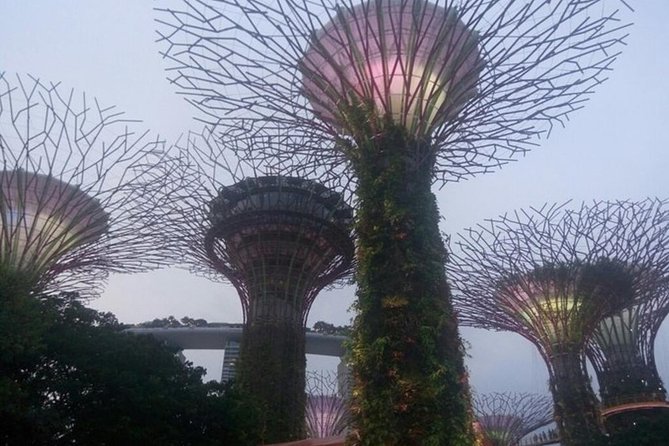 Make the most of your Singapore visit with this private 10-hour Singapore city highlights tour. With your private vehicle, you can save your time most on traveling from spot to spot, which offers you more time on highlights of the city-state. Travel across the city to its four major culture areas: Chinese, Malay, Indian, and Western colonial heritage. Lunch stop at Chijmes, a 19th-century convent & school then dinner at Chinatown's hawker food market. Take a glimpse on how traditional Asian culture mixes with contemporary culture and truly immerse yourselves in the culture, history and traditions of this diverse land.

- Confirmation will be received at time of booking, unless booked within 7 days of travel. In this case confirmation will be received within 48 hours, subject to availability
- Wheelchair accessible
- Pickup and drop off spots can be different but only limit to one station for both pickup and drop off.
- Guide will not be accompanying you inside of the attraction(s).
- This is your private tour so Itinerary can be made small changes according to your physical condition during the tour.
- No minimum travelers required
- Minimum age is 3 years
- Stroller accessible
- Service animals allowed
- Near public transportation
- Infant seats available
- Transportation is wheelchair accessible
- Surfaces are wheelchair accessible
- Most travelers can participate
- This experience requires good weather. If it’s canceled due to poor weather, you’ll be offered a different date or a full refund
- This is a private tour/activity. Only your group will participate

Meet your driver/guide at 9:00am at your hotel in Singapore city or cruise center or Changi Airport.  Our first stop is Arab Street, the smallest of Singapore's ethnic quarters and a pedestrianized tourist market strip with shops hawking all manner of Middle Eastern and Islamic goods. the lively district of Singapore. Have a photo stop at Sultan Mosque and Istana Kampong Glam.

Head to Little India, the lively ethnic Indian district of Singpaore. Stroll through the Indian restaurants and fruit and vegetable stands, and check out Little India Arcade, a bazaar-style shopping area where vendors sell the same things you might find in Mumbai or Delhi. Souvenirs, Indian street snacks or sweets and temporarily tattooed in henna (own expense) are what you can find and try here.

Lunch stop at Chijmes, a 19th-century convent & school. Then board on the bumboat for a leisurely ride on the river cruise will take you past the landmarks of the Rafffles' Landing Site, Asian Civilisations Museum, row of old shophouses along Boat Quay, Fullerton Hotel, Esplanade Singapore, The Merlion Park, Singapore Flyer and the latest attraction Marina Bay Sands Integrated Resort.

Have your dinner at Chinatown's hawker food market then head to Garden by the Bay for a sunset view of Singapore (optional-additional fee).  Tour will conclude with drop off at your hotel or cruise center or Changi airport.

Traveler pickup is offered
This is a private tour so we can arrange pickup and drop off according to your needs. The pick up and drop off areas covered by the fee you paid are: hotels in downtown area of Singapore, Marina Bay Cruise Centre Singapore, Singapore Changi Airport.

If you require pickup and dropoff out of the above area, such as border port with Malaysia, cruise port in Sentosa, hotels in Sentosa, extra cost will happen.

Kris was timely meeting us and had a nice vehicle that supported all of our luggage and visitors. We spent the day with him and he took us all over Singapore. It was our 3rd trip there, but the others was their first trip. We started with the river cruise, which is excellent and visited many areas of interest. We had lunch on our own and rejoined Kris for the afternoon. He dropped us off at the airport in plenty of time for our flight.

Our tour guide and driver Chris was awesome! Very entertaining and knowledgable. He was so, so very accommodating to our special needs wheelchair bound friend traveling with us. Chris pushed him thru the park and sat with him at a restaurant while the rest of us viewed the park. He found us a McDonalds! Lol

Enjoyable tour in comfortable vehicle with two knowledgeable guides (Chris and Allen). Tour began at Clarke Quay with "bum boat" ride on the Singapore River which is highly recommended. Many places covered during tour including "Merlion" statue which was observed by water and land, tour of Fullerton Hotel and other nearby grounds. Lunch credit was provided and dined on our own. As it was very hot and humid the day of the tour, we were taken to Gardens by the Bay, which is not included in the tour. The Gardens were amazing and a must see (its cool inside the domes). Although we had to pay for our admission, it was definitely worth it. Walking tours of the various merchant areas (China Town, India and Arab Street) were also included. Tour guides provided bottled water however it was not cold (a small cooler would solve the issue). Although we stopped by other areas such as Marina Bay Sands Hotel, admission costs were not included in the tour. I cannot say that the tour was a great value for the price paid, it was an enjoyable day which included all you need to see in Singapore. We were given a credit for dinner and dined on our own. All told, I would recommend this tour.

We are four of family which including two teens. Nevertheless the weather was hot we enjoyed the tour with fully air conditioned car as well as knowledgeable tour guide.

Very good trip. You can see almost all important places. Kind and helpful guide who adjusted to our needs. Highly recommended! Especially for people who have little time in Singapore.

Our guide Chris was absolutely fantastic. We had already spent two days in Singapore so he personalized the tour to what we wanted. We went along the Singapore River, stopped for ice cream, toured the entire area, went to the Gardens By the Bay and a boat ride too. It was overall a wonderful day and just the four of us in our group we felt very special and catered to. We enjoyed lunch together at a wonderful restaurant while Chris provided recommendations for lunch of local specialities. Highly recommend this tour, ask for Chris!

We booked a private tour, car, driver and English speeking guide. Car and driver were excellent, but we could hardly understand the guide due to his mispronouciation and his lack of understanding. He was an official guide and on his bagde only Mandarin as a language was listed. You‘d better buy a book about Singapore, take a taxi, you learn more and save lots of money.

Make the most of your Singapore visit with this private 10-hour Singapore city highlights tour. With your private vehicle, you can save your time most on traveling from spot to spot, which offers you more time on highlights of the city-state. Travel across the city to its four major culture areas: Chinese, Malay, Indian, and Western colonial heritage. Lunch stop at Chijmes, a 19th-century convent & school then dinner at Chinatown's hawker food market. Take a glimpse on how traditional Asian culture mixes with contemporary culture and truly immerse yourselves in the culture, history and traditions of this diverse land.

Travel in a Limo-Bus to our Singapore Attractions

Private One Day Highlight Tour of Singapore with Singapore Flyer

Private Customized Tour of Singapore - Half Day or Full Day