Authentic Geisha Performance and Entertainment including a Kaiseki Course Dinner 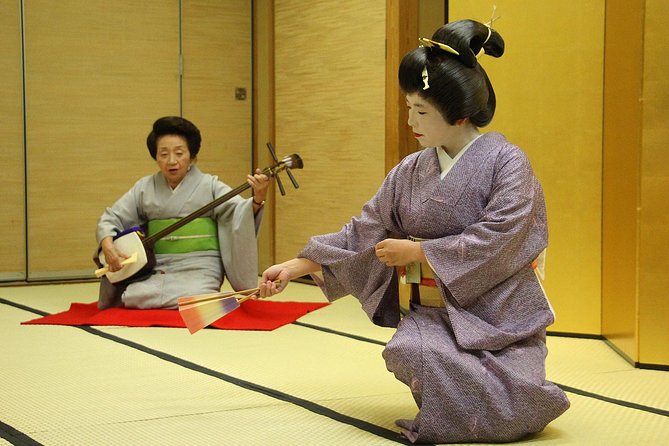 Experience an authentic geisha performance and entertainment with multi-course kaiseki dinner, including an English host/interpreter at a ryoutei, or traditional Japanese restaurant, for a small group.

- Confirmation will be received at time of booking, unless booked within 7 days of travel. In this case confirmation will be received within 48 hours, subject to availability
- Please advise any specific dietary requirements at time of booking
- Floor seating is default unless otherwise specified (chair seating available upon request)
- Children must be age 10 or older and accompanied by an adult
- Private dinner events for your group are available upon request (if selected option).
- Pending Approval: The dinner may need a minimum of 6 to 8 people to book. When you make a booking, you will be placed on a waiting list until more people have confirmed their booking for the same date, or you will be asked to reschedule to a different day to attend this tour. Confirmations regarding your booking will be sent at least 5 days before your activity date.
- For events with less people, the company may still proceed with the event and in which only one geisha will attend.
- Depending on availability (especially during peak season), there may be only one geisha attending the event. In addition, the venue may change depending on availability and group size.
- Attire: Please also wear socks as there will be tatami mats.
- Non-Smoking: All seats are non-smoking; there are designated areas outside for those who would like to smoke.
- Not wheelchair accessible
- If you want to do private geisha event, we recommend booking 2 geisha for more than 5 people.
- Most travelers can participate
- For groups with 15 or more people, there will be at least 3 geisha for the event.
- All-you-can-drink Option: For groups of 10 or more people, nomihodai (all-you-can-drink) is available at 2900 JPY per person, payable in cash at the venue. At the time of booking, please let Japan Awaits know that you would like to include nomihodai (all-you-can-drink). For groups of 9 or less people, nomihodai is not available.

Reminiscent of the Eiffel Tower, this landmark features observation areas & other attractions.

Asakusa retains the vibe of an older Tokyo, with traditional craft shops and street-food stalls along Nakamise Street near the ancient Sensō-ji temple.

Asakusa Shrine is a Shinto shrine located in the Asakusa district of Tokyo, Japan. Also known as Sanja-sama, it is one of the most famous Shinto shrines in the city.

The Sumida River is a river that flows through Tokyo, Japan. It branches from the Arakawa River at Iwabuchi and flows into Tokyo Bay.

Akihabara is a buzzing shopping hub famed for its electronics retailers, ranging from tiny stalls to vast department stores like Yodobashi Multimedia Akiba.

A paradise-like oasis of green in the heart of busy Tokyo, Ueno Park is the city's largest green space and one of its most popular tourist attractions.

Public park with a pond, laid out in the Edo-period style, on the site of 17th-century Shogun villa.

Stately museum complex devoted to the art & antiquities of Japan, as well as other Asian countries.

Sprawling wholesale fish market with an array of seafood & viewing areas for a popular tuna auction.

It is Tokyo's oldest temple, and one of its most significant.

Sumida Park between the Azumabashi and Sakurabashi bridges is a great place to have a hanami cherry blossom viewing party. There are 640 cherry blossom trees.

Most of the water buses are operated by the Tokyo Cruise Ship Company, and the Sumida River Line runs from Asakusa to Hama Rikyu garden (35 minutes).

Originally opened as a flower park, Hanayashiki is a small amusement park with a history of more than 150 years. Located just a few steps from Sensoji, the nostalgic amusement park including a small Ferris wheel, roller coaster, carousel and space shot.

Sprawling museum with a 360-degree movie theater & exhibits on topics such as dinosaurs & evolution.

Hands-on exhibits & classes exploring the future of science & technology, plus a cafe & a gift shop.

The museum's permanent exhibition vividly illustrates the past of Tokyo (known as Edo until 1869) through its exhibits and covers many features of the capital from the Edo Period to relatively recent decades.

Rising up a whopping nine floors, Itōya features just about everything you’d expect in a stationary shop, from pens and notebooks to postcards and folders.

Mitsukoshi Ginza is one of the most famous and exclusive department stores in Japan.

This trendy and upscale department store features the latest styles from famous international and Japanese designers ranging from Dior and Louis Vuitton to issey Miyake and Yohji Yamamoto.

Yūrakuchō is a business district of Chiyoda, Tokyo, Japan, situated in between the Ginza and Hibiya Park, southeast of the Tokyo Imperial Palace.

Hibiya Park with its carefully maintained trees, grass lawns and flower beds, is an oasis of calm in the heart of the city, and is within easy walking distance of the Imperial Palace and Ginza.

This site with scenic gardens & tours of the grounds is the main residence of the emperor of Japan.

Tokyo Station and its beautiful, nostalgic red brick building is on the must-see list of every tourist to Japan.

This was a great and unique experience. I highly recommend it. Everyone was just terrific and it was a lot of fun.

Favorite thing I did in Tokyo! The question and answer session was phenomenal.

A once in a lifetime experience, authentic and 'only in Japan'. We missed out on seeing the geishas is Kyoto whilst we were on tour so decided to book this experience after our tour ended. After we booked it we were a bit worried what we had signed up for as we had to catch 2 subway trains to get to the area and then walk to find the restaurant, with little to no signage in English. The external facade of the restaurant was certainly not a 5 star venue. However, we were ushered into a private dining room, plain but with a definite Japanese feel with tatami mats and traditional music playing, and greeted by a young American woman who would be our host/interpreter for the evening. And so began our experience. AND IT WAS ABSOLUTELY FABULOUS. Our geisha, through the interpreter, answered all questions about herself and her profession, educated us in the etiquette, prerequisites and history of being a geisha, danced, played games and posed for as many photos as we wanted. It was definitely one of our favourite experiences in Japan and we would highly recommend it. THe food, despite our initial reservations about the restaurant, was oishi delicious.

We arrived in Japan about 10 hrs before this Experience... What a way to open your eyes to the culture... Mind blowing... We were jet lagged without doubt and I was starting to question my wisdom for booking this event... Wow... It's beyond your wildest dreams...The hosts instantly make you feel welcome.. .At this point I won't Lie... The food on first presentation will make you do a double take... But like us... It will Hit home... NOW... I'm in Japan... Our Geisha was just Stunning... Having the chance to learn about her lifestyle face to face and then Witness her drink Beer yes alcohol... well that was priceless...

I was specifically looking for a geisha experience and was pleasantly surprised at the availability of this option. Certainly worth the while, everything from the friendly and very knowledgeable host, to our own personal geisha, to the food at the restaurant chosen. Everything was beyond expectations and truly gave me a good glimpse of Japanese culture and the importance of the Geisha as part of this culture. There were also traditional geisha performances, as well as some games played, which were very fun indeed. I would highly recommend this experience for couples and small groups. Do be on time, as the restaurant reservations are strict and on a back to back basis.

We weren't sure what to do in Japan. So we decided to take in the Geisha event per a friend's recommendation. It was amazing! We were able to enjoy a traditional Japanese meal, Sake, visit and chat with a Geisha. The food was amazing. We were served several courses over the few hours we spent drinking and chatting with our hosts. We ate a japanese salad, fruit, blowfish, sashimi, crab, oysters, and pork, We learned a few Japanese games that were very entertaining. We brought the games back to the states and enjoyed playing them with family and friends over the holidays. We also got to watch a traditional seasonal dance performed by the Geisha. I would most definitely go back and do this again, as well as recommend it to others!

We had a host/translator who was very helpful. The geisha spoke Japanese, it was so much fun talking back and forth though!

We attended the event in mid-June, 2016. We were pleasantly surprised by how professional everyone was: the geishas, the translator/guide, the restaurant staff. We paid to be part of a group, but it turns out we were the only ones but the operators went on with it anyway, so it effectively became a private geisha experience. My wife and I felt awkward at first, but the geishas and translator quickly put us at ease ... after dinner it was time for fun and games, and I was soon sprawled on the floor after losing at rock-paper-scissors with one of the geishas. My wife and I had a great time, and we learnt a lot that evening, especially from our translator Kaori. We'd definitely recommend this activity.

WE WERE EXCITED TO VISIT THE LAND OF THE GEISHA. Our ladies were entertaining and so sweet. I did not expect them to be older. The food at this facility was horrible! I am sorry to say this but it was not up to the standard we have come to know and expect in Japan. However, the ladies answered all of our questions and explained the history of the Geisha.

Authentic Geisha Performance and Entertainment including a Kaiseki Course Dinner

Experience an authentic geisha performance and entertainment with multi-course kaiseki dinner, including an English host/interpreter at a ryoutei, or traditional Japanese restaurant, for a small group.