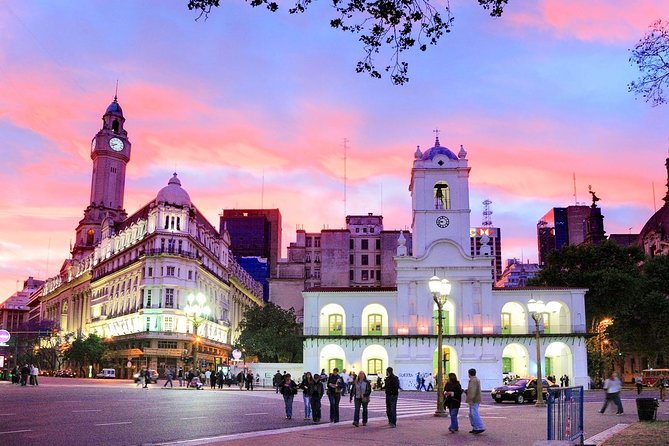 Enjoy a Super Saver package of all the highlights of vibrant Buenos Aires. Save time and money with this tour package that combines three tours so you can visit Buenos Aires ´s popular highlights, as well as the town of San Antonio de Areco and visit a exclusive estancia where you will see a folklore show; and live and feel the best tango show of the city with typical food for dinner included - all in three different days so you have enough time to discover this thrilling city.

Stop At: Plaza de Mayo, Av. Hipolito Yrigoyen S/N, Buenos Aires Argentina
The May Square is located in the Porteño Downtown, neighborhood of Monserrat, in the area where the foundation of Buenos Aires took place. The Plaza de Mayo is the most important and oldest public square of the city. The name of this square commemorates the Revolution of May 25, 1810, date in which the citizens gathered around to expel the Viceroy and form a creole government. Since then, the Square has been a silent witness to the most important political and social events in the country.
Duration: 15 minutes

Pass By: Calle Defensa Bairro San Telmo, Buenos Aires Argentina
San Telmo is an old neighborhood with a bohemian touch thanks to its temporary art galleries, night bars and street murals. The Defensa street, full of antique shops and bustling brasseries, passes through the Dorrego square, where many tourists come on Sundays to see the street market and street performances. Winding roads run through Lezama Park among jacaranda trees. The neighborhood is full of exclusive restaurants with tango shows.

Stop At: La Boca, Avda Almirante Brown, Buenos Aires Argentina
La Boca is a working class neighborhood that has several attractions next to the Riachuelo. Asadores and street artists mark the entire Caminito, a narrow alley flanked by brightly colored zinc houses that evoke its origin as an immigrant neighborhood. The Bombonera is the Boca Juniors stadium and a whole hotbed on match days. The Proa Foundation is a museum of modern art with temporary exhibitions and views of the old docks.
Duration: 20 minutes

Pass By: Puerto Madero, Rosario Vera Penaloza, Buenos Aires Argentina
Puerto Madero is a renovated neighborhood that faces the bay. Its renovated redbrick buildings house exclusive grills frequented by tourists and businessmen at lunchtime. There are also modern skyscrapers with multinationals and luxury apartments. The lakes in the area are surrounded by trails, as is the ecological reserve Costanera Sur, very popular with runners and families. The elegant suspension bridge of the Woman connects the ports.

Pass By: Retiro, Buenos Aires Argentina
Retiro is a neighborhood with great diversity and quiet streets. Art galleries and chic coffee shops lead to the emblematic and busy train station of Retiro, British style and surrounded by fast food stalls. The art deco tower of the Kavanagh building offers views of the Plaza San Martín, a steep park where office employees rest in the shelter of jacaranda and patriotic monuments. Tourists flock to the Florida pedestrian street for its leather goods boutiques, souvenir stalls and tango dancers.

Stop At: Cemiterio de Recoleta, Junin 1760, Buenos Aires C1113 Argentina
The Recoleta Cemetery is a famous cemetery in the city of Buenos Aires. It is located in the distinguished neighborhood of Recoleta and contains the tombs of many outstanding personalities of the country. It was inaugurated on November 17, 1822.

Stop At: Museo Draghi, Calle Lavalle 387 Frente a la Plaza Principal, San Antonio de Areco B2760BME Argentina
Paradores Draghi is the ideal corner for those who enjoy the cultural attractions offered by a place. There you will access a tour through the sumptuous space where you can see a vast collection of pieces of rural goldsmithing of the nineteenth century, which reveals the mysteries of a period of national identity consecration of the figure of the Gaucho as a main character of that time.

In Paradores Draghi begin your journey through history not only as a spectator, but also as a participant in the process of making exclusive goldsmith pieces that take shape through the hands of artisans recreating the techniques of traditional goldsmithing as their founder, Juan José Draghi, did in the 60s.

Once you get to the town, you will enjoy a tour of the village including a walk around the historical downtown of the city.
Duration: 15 minutes

Stop At: Parroquia San Antonio de Padua, Calle B Mitre 366, San Antonio de Areco B2760BVH Argentina
Located on Segundo Sombra Street, between Alsina and Arrellano. Don José Ruiz de Arellano founded the first oratory in the center of his stay. The foundation of this oratory was very important for the creation of the town. In the years 1720 and 1728, the first chapel was built, it was located a little more to the right than the current one. The foundation stone of the present church was placed on February 7, 1869 and was buried under the central entrance door. Inside it was placed a lead box containing the original records written on parchment, newspapers of the day, medals and coins of the time.
Duration: 10 minutes

Stop At: Boliche de Bessonart Bar, San Antonio de Areco, Buenos Aires Province, Argentina
In the grocery and drinks store, the peasants and country people who came to the town to provide themselves and do errands to the cereal house, the store, the doctor, the bank, used to meet. There "stopped" Don Segundo Ramírez, the gaucho who was later a character in the novel by Ricardo Güiraldes.
Duration: 5 minutes

Stop At: Estancia El Ombu de Areco, RP 31, cuartel VI, Villa Lia, Buenos Aires San Antonio de Areco Argentina
Make your way to the exclusive ‘El Ombu de Areco’ Estancia. At this place, you will have a chance to take rides on horses or go for a ride in a carriage while enjoying some traditional cold cuts, cheeses and beverages. Then, you will enjoy a typical Argentinian barbeque of the finest meats. While you have dessert, you will be able to see a folklore show followed by a demonstration of gaucho skills.
Duration: 5 hours

Stop At: Calle Balcarce, Buenos Aires Argentina
Discover a unique Tango Show that will offer you a journey through the ages while enjoying a gourmet dinner. The menu is à la carte and includes a wide variety of dishes with a cellar composed of fine wines from the most renowned wineries in Argentina.
Duration: 3 hours

Meals included:
• Dinner
No accommodation included on this day.

Enjoy a Super Saver package of all the highlights of vibrant Buenos Aires. Save time and money with this tour package that combines three tours so you can visit Buenos Aires ´s popular highlights, as well as the town of San Antonio de Areco and visit a exclusive estancia where you will see a folklore show; and live and feel the best tango show of the city with typical food for dinner included - all in three different days so you have enough time to discover this thrilling city.