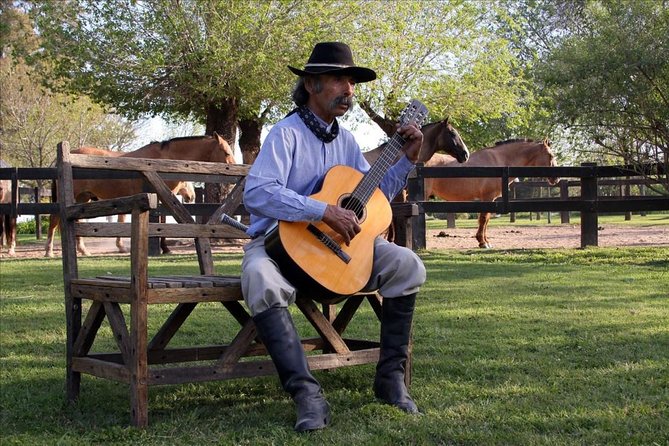 Enjoy a full-day, shared tour and visit the town of San Antonio de Areco and Estancia El Ombu de Areco, which is one of the most traditional in the Pampas. You will get to know the history and development of the Argentinian pampas and the lifestyle of the Gauchos.

Begin your 9-hour tour with a drive from your hotel in Buenos Aires to the village of San Antonio de Areco. Enjoy views of the pampas en route and listen to commentary about the area from your guide.

Paradores Draghi is the ideal corner for those who enjoy the cultural attractions offered by a place. There you will access a tour through the sumptuous space where you can see a vast collection of pieces of rural goldsmithing of the nineteenth century, which reveals the mysteries of a period of national identity consecration of the figure of the Gaucho as a main character of that time.

In Paradores Draghi begin your journey through history not only as a spectator, but also as a participant in the process of making exclusive goldsmith pieces that take shape through the hands of artisans recreating the techniques of traditional goldsmithing as their founder, Juan José Draghi, did in the 60s.

Located on Segundo Sombra Street, between Alsina and Arrellano. Don José Ruiz de Arellano founded the first oratory in the center of his stay. The foundation of this oratory was very important for the creation of the town. In the years 1720 and 1728, the first chapel was built, it was located a little more to the right than the current one. The foundation stone of the present church was placed on February 7, 1869 and was buried under the central entrance door. Inside it was placed a lead box containing the original records written on parchment, newspapers of the day, medals and coins of the time.

At the corner of Don Segundo Sombra and Zapiola streets, a peaked house rises from its peeling walls. This is the grocery & drinks store where peasants and country people who came to town to provide themselves and do errands to the cereal house, the store, the doctor, the bank, used to meet. Don Segundo Ramírez, the gaucho who was later a character in the novel by Ricardo Güiraldes, used to stop here. Nowadays, it continues to be a meeting place and has a long history of typical people from the countryside.

Make your way to the exclusive ‘El Ombu de Areco’ Estancia. At this place, you will have a chance to take rides on horses or go for a ride in a carriage while enjoying some traditional cold cuts, cheeses and beverages. Then, you will enjoy a typical Argentinian barbeque of the finest meats. While you have dessert, you will be able to see a folklore show followed by a demonstration of gaucho skills.

Great! The hosting family was amazing! Facilities and show too!!! Very entertaining!! Recommended!!!!

We had a wonderful day. They picked us up at our apartment door, on time. There were only 12 of us. Our guide Eugenia was knowledgeable,extremely considerate and friendly, spoke excellent English, knew when to talk and when to stop on our 1.5 hour drive to San Antonio de Areco. We had a nice visit in this very quaint village: the silversmith, the church, the park. We then drove to the estancia where we were greeted with drinks and delicious empanadas. Then we went horseback riding for 30 minutes. This was followed by lunch in the garden of this very stately estate, the food was plentiful ( 3 different salads and seven or eight servings of different meats, choice of 2 desserts) and delicious with your choice of drinks. They then put on a show of folkloric dances and songs. There were “real” gauchos actually working on this farm.
We had a quiet return to our front door. The tour was 9 hours in total and Eugenia made it a wonderful experience that we highly recommend.

You will NOT be dissapointed! Attended with my husband and our 13 yr old. Our ride was super fun and beginner friendly. The setting and estancia were stunning. Food was good and the entertainment was pretty, and interactive. Staff was very hospitable. The stop into town was also worth it. Just do it!

We were part of s small group led by tour guide Enrique. He was a very friendly and knoiwledgeable tour guide. Stopped in a small village before ranch. Had a great time with the horse ride, great food and show - specially Horse Whisper. Enrique was very informative about the ranch but also talked about life in BsAs, which made the tour all the better.

Very good day with Nickolas as a great guide. Fun and very lively group. Only criticism is that the food was very salty.

Absolutely fantastic. Lucia our guide best ever - so knowledgeable, friendly and helpful. Driver superb as well. Gaucho wonderful - no problem if not ridden a horse. Fabulous BBQ
Fun folk dancing.

The tour was well organised and fun we were blessed with amazing weather . The ride was lovely but there could have been given more help for less confident riders in the group. But every thing was fantastic. Food and wine and entertainment wonderful.

A visit to all those rich traditions that have enabled BsAs to become one of the most imposing and interesting cities in the world: dance, asado and gauchos. Brilliant!

I had amazing time during the whole trip. The tourist guide, the Frenchman, is very knowlegeble and pleasant and gave us extensive information on gaucho history and life. I felt cared the whole time. We were welcomed by the owner of the farm and his family. Btw their empanadas are the best we had in Buenos Aires! They also accommodated special requests and they really didnt have to.The Parillada was abundant and delicious. Thank you all for making this experience so wonderful!

Superb tour , from start to finish. Very well organised, amazing guide, such a warm and friendly atmosphere. Ranch is a working ranch and they limit numbers to ensure a more personal experience. Food excellent. Horse whisperer not to be missed!!! To summarise, probably the best tour we have ever been on.

Enjoy a full-day, shared tour and visit the town of San Antonio de Areco and Estancia El Ombu de Areco, which is one of the most traditional in the Pampas. You will get to know the history and development of the Argentinian pampas and the lifestyle of the Gauchos.