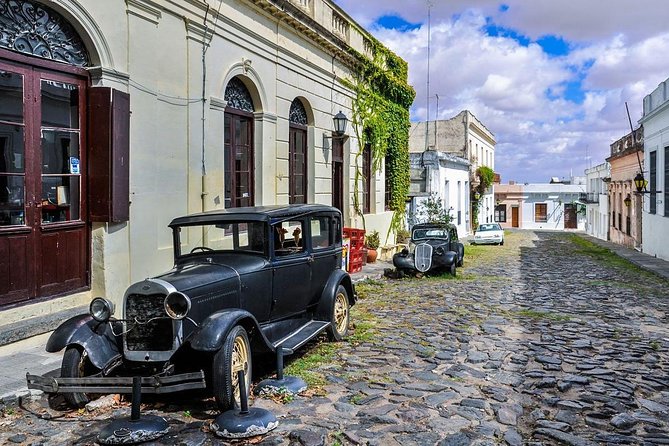 Get to know the city of Colonia del Sacramento on a one day trip from Buenos Aires. Discover the colonial charm and history of this coastal city while exploring the cobbled streets with a professional guide. The tour includes a fast ferry, a 2-hour walking guided tour in Colonia with a guide and transfers in Buenos Aires and Colonia.

The historic city of Colonia del Sacramento, founded in 1680, evokes images of ancient Lisbon for its Portuguese-style architecture and winding streets. Colonia is located in the southwestern part of Uruguay, on the Río de la Plata, and in 1995 UNESCO declared it a World Heritage Site. You can visit Colonia easily by ferry from Buenos Aires in just a day trip, and this is one of the reasons that make its beaches a popular destination of great tourist attraction for Argentines. Among its main monuments are the Church Matrix, which is the oldest in the country, the Municipal Museum and a port dating from the seventeenth century that merges harmoniously with the river.

It is born in the Plaza Mayor and continues on a slope to the Río de la Plata. It is a narrow street with Portuguese characteristics, cobbled with a wedge and without sidewalks. The sides are tilted towards the center to form a drainage channel.

The houses, built in the first half of the 18th century, have stone walls, tile roofs and ceramic floors. The doors and windows are small and made of wood, although only houses with a gabled roof are preserved.

It was built in the year 1745 by order of the Portuguese governor Vasconcellos who at that time was leading these lands. In its origins the Door was the portico of entrance to Colony, protected at that time by a strong military of thick walls that were frequent target of pirate attacks, Spanish and English.

It was built in January 1857. It has two red flashes every nine seconds. It is a circular tower of white masonry with a dome with white and red radial stripes. It has a unique structure with a square base and a cylindrical tower that reaches the lantern. It was built on one of the old towers of the Convent of San Francisco, whose ruins are at the foot of the lighthouse. Its height is 26 meters and has a luminous range of 7.8 nautical miles

The Basilica has a most unusual altar feature for its time and even now; an back lit semi-circular alcove that features a very large monstrance (receptacle for displaying the Sacred Host or Blessed Sacrament). The outside brickwork shows the Portuguese influence of its builders.

Traveler pickup is offered
Pick up will be at your centrally located hotel in Buenos Aires (Palermo, Recoleta and Downtown area)

The price we paid for our ticket included hotel transfers both ways, ferry ride both ways and an private guide. We really enjoyed the tour of Colonia with our guide. She was sweet and knowledgeable. She explained the history of the place to us well and gave is great recommendations during our free time. Well worth the money and worth the trip!

Get to know the city of Colonia del Sacramento on a one day trip from Buenos Aires. Discover the colonial charm and history of this coastal city while exploring the cobbled streets with a professional guide. The tour includes a fast ferry, a 2-hour walking guided tour in Colonia with a guide and transfers in Buenos Aires and Colonia.