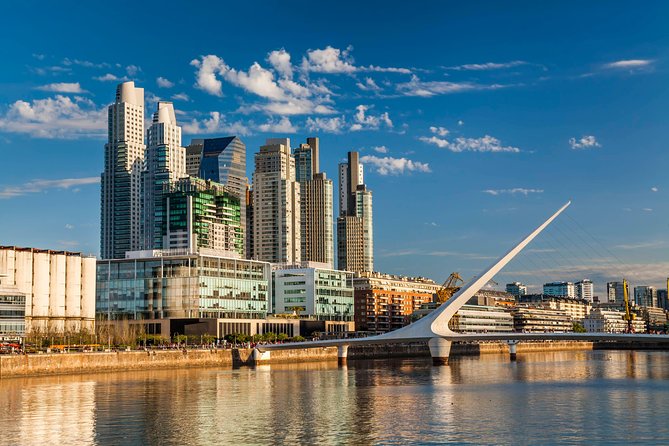 This service is unique due to its specific characteristics: small groups of people per tour, one language per vehicle and an excellent profile and preparation of the tour guides. The tour is 3 hours long and visits the most important spots in the spectacular city of Buenos Aires.

Your tour includes hotel pickup and drop-off. Tour is limited to 15 people.

- Confirmation will be received at time of booking
- Not wheelchair accessible
- Infant seats available
- Most travelers can participate
- This is a kid-friendly tour
- This tour/activity will have a maximum of 10 travelers
- Face masks required for guides in public areas
- Face masks provided for travelers
- Hand sanitizer available to travelers and staff
- Social distancing enforced throughout experience
- Regularly sanitized high-traffic areas
- Gear/equipment sanitized between use
- Transportation vehicles regularly sanitized
- Guides required to regularly wash hands
- Regular temperature checks for staff
- Temperature checks for travelers upon arrival
- Paid stay-at-home policy for staff with symptoms
- Contactless payments for gratuities and add-ons
- In addition to the security measures taken by the company we encourage passengers to take note of the symptoms caused by COVID-19 and to always be conscious of sanitization and prevention (please ask for further assistance).

The May Square is located in the Porteño Downtown, neighborhood of Monserrat, in the area where the foundation of Buenos Aires took place. The Plaza de Mayo is the most important and oldest public square of the city. The name of this square commemorates the Revolution of May 25, 1810, date in which the citizens gathered around to expel the Viceroy and form a creole government. Since then, the Square has been a silent witness to the most important political and social events in the country.

San Telmo is an old neighborhood with a bohemian touch thanks to its temporary art galleries, night bars and street murals. The Defensa street, full of antique shops and bustling brasseries, passes through the Dorrego square, where many tourists come on Sundays to see the street market and street performances. Winding roads run through Lezama Park among jacaranda trees. The neighborhood is full of exclusive restaurants with tango shows.

Caminito is a museum alley and a traditional passage, of great cultural and tourist value, located in the La Boca neighborhood of the city of Buenos Aires, Argentina. The place acquired cultural significance because it inspired the music of the famous tango Caminito (1926), composed by Juan de Dios Filiberto.

Puerto Madero is a renovated neighborhood that faces the bay. Its renovated redbrick buildings house exclusive grills frequented by tourists and businessmen at lunchtime. There are also modern skyscrapers with multinationals and luxury apartments. The lakes in the area are surrounded by trails, as is the ecological reserve Costanera Sur, very popular with runners and families. The elegant suspension bridge of the Woman connects the ports.

The Teatro Colón is an opera house in the city of Buenos Aires. Due to its size, acoustics and trajectory, it´s considered one of the five best in the world. According to a survey conducted by the acoustic expert Leo Beranek and outstanding international opera and orchestra directors, the Teatro Colón has the hall with the best acoustic for opera and the second best for concerts in the world.

Comparable with the most important lyrical rooms in the world, such as the Scala in Milan, the Metropolitan Opera House in New York, the State Opera of Vienna, the Royal Opera House (Covent Garden) in London and the Paris Opera, it is an unequivocal place of consecration for those who present themselves in it and an inescapable place for music lovers.

Retiro is a neighborhood with great diversity and quiet streets. Art galleries and chic coffee shops lead to the emblematic and busy train station of Retiro, British style and surrounded by fast food stalls. The art deco tower of the Kavanagh building offers views of the Plaza San Martín, a steep park where office employees rest in the shelter of jacaranda and patriotic monuments. Tourists flock to the Florida pedestrian street for its leather goods boutiques, souvenir stalls and tango dancers.

Recoleta is a thriving area, ideal for walking, known for its Parisian-style terraced houses, ancient lavish palaces and luxurious boutiques. One of the main attractions is the Recoleta Cemetery, which houses extravagant tombs of national icons, such as Eva Perón. The National Museum of Fine Arts exhibits masterpieces by Argentine artists, and the Recoleta Cultural Center offers temporary avant-garde exhibitions. In the Plaza Francia, with lawn areas, there is a craft market on weekends.

The Recoleta Cemetery is a famous cemetery in the city of Buenos Aires. It is located in the distinguished neighborhood of Recoleta and contains the tombs of many outstanding personalities of the country. It was inaugurated on November 17, 1822.

Wait our tour guide at the Hotel Lobby

This was a short tour, but one that was useful to learn the layout of the city. I recommend you do this on the first day visiting. The tour was worth while, the vehicle was comfortable and the guide was very knowledgeable.

A great way to get an overview of Buenos Aires and all of its distinctive districts. From La Boca and its famous Caminito Street to Puerto Madero and the Women's Bridge to San Telmo with it's antique markets to the famous Recoleta Cemetery and of course the Historic Quarter. And through it all was the common thread of Evita Peron and the tango. We covered a lot of ground in one afternoon and it gave us a taste of where we wanted to spend our time for the rest of our vacation.

Very good guide and interesting program. I did appreciate the size of a small group. Very good service.

Really enjoyed this small group tour, took us around the city and we were pleased that we went to La Boca and were given time to walk around and do a photo call. Definitely recommend as we were picked up at the Cruise Terminal.

Tour Guide was very pleasant and knowledgeable, I especially appreciated his knowledge of Argentine History

Excellent tour guide and an interesting tour of the city. She was precise and clear in her description and had excellent historical knowledge.

Excellent guide, very knowledgeable with not just details of the tour but of Buenos Aires in particular. Made suggestions for other activities and experiences. Punctual pick up and drop off. Driver very safe and the experience added extra value to our short stay in Buenos Aires.

This afternoon tour was excellent. Only 8 on the trip which meant the guide could answer any questions at length Covered all the main sites of Buenos Aires in a much needed air conditioned mini bus Would definitely recommend this tour you will not
be disappointed

It was a perfect introduction to the city on the day we arrived. Our guide Rosa was great and we met nice people from many different places. I would have like a little more time in La Boca

This service is unique due to its specific characteristics: small groups of people per tour, one language per vehicle and an excellent profile and preparation of the tour guides. The tour is 3 hours long and visits the most important spots in the spectacular city of Buenos Aires.

Your tour includes hotel pickup and drop-off. Tour is limited to 15 people.

3-Day Tour to Iguazu Falls by Air from Buenos Aires