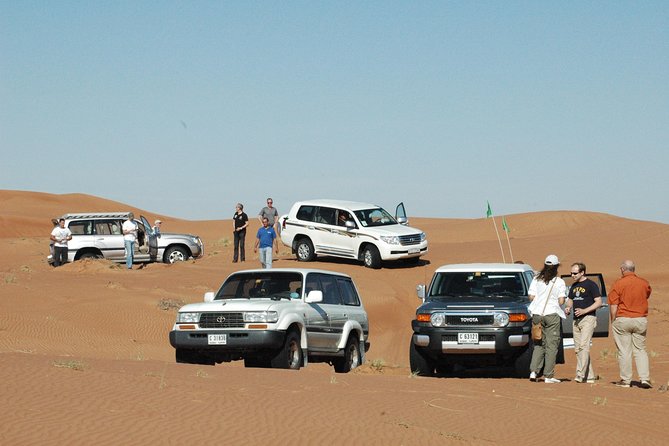 Venture into the desert and enjoy a complimentary quad bike ride at the desert camp, barbecue dinner and traditional Emirati entertainment on this 5 to 6 hour 4x4 safari from Dubai. As the sun starts to set, scale the dunes on your 4x4 and arrive at a Bedouin-style camp for shisha, Arabic coffee and dates. Then, take an exciting complimentary quad ride, watch henna artists at work, enjoy a camel ride, and admire impressive sand art. Finish with a barbecue dinner under the stars as you watch belly dancers and a ‘tanoura’ dance, with whirling dervish dancers spinning before you.

- Confirmation will be received at time of booking, unless booked within 1 day of travel. In this case confirmation will be received as soon as possible, subject to availability
- Not recommended for pregnant travelers
- Children aged 4 years and under are not allowed on the tour
- Tours or part of the tours could be cancelled or changed last minute due to unforeseen circumstances and government regulations
- Not wheelchair accessible
- Infant seats available
- No heart problems or other serious medical conditions
- Most travelers can participate
- This tour/activity will have a maximum of 25 travelers

A 'must do' tour in Dubai that takes you on a drive through the dunes, ride a camel, henna tattoos, and so much more. Enjoy a sumptuous dinner and live entertainment before heading back to your hotel.

Leave the crowds of Dubai behind on this Jeep safari tour into the desert. Your safari guides will drive you in a 4x4 Jeep vehicle over the expansive sand dunes, deep into the heart of the desert. As the sun sets over the dunes, head to the Bedouin campsite for a traditional welcome with Arabic Coffee and dates.

Settle in with Bedouin-style seating and enjoy an aromatic Shisha water pipe before heading off to visit a camel farm. You'll have the chance to enjoy camel rides, view local sand art, and admire the traditional Arabic attire and work of henna designers.

What's Included:
• Pick-up and drop off at Dubai hotels (Pick-up is not available from private residences, meeting point must be a hotel in Dubai)

Children below 3 yrs are not allowed

Pregnant and people with back problem should avoid this tour.

Traveler pickup is offered
Please mention the name of your hotel for pickup
We pickup only from Dubai Hotels.
We dont pickup from private residences and apartments.
Please be ready at the concierge desk 5 minutes before the pickup time.

It was an amazing deal for a great excursion into the Dubai desert. So many activities included for the price, you just can’t beat it.

The tour was a great experience.
John, our driver, was very knowledgeable and friendly. He gave us a lot of information about the city and its culture. Camel ride and ATV ride were amazing.

We booked this trip and after hearing so many people moan about how certain things weren’t included we behalf to worry. However they thankfully were proven wrong. Quads, camel ride and henna we’re all included. The bbq was lovely. The setting was breathtaking and the dunes were awesome. Our driver picked us up from the hotel and he was brilliant and dropped us off when the evening was over. Would highly recommend this trip.

We had a wonderful time on our Desert Safari.Our Driver Mohammed was very professional and he had so much knowledge of the desert.I would recommend Sand Trax...

Great experience from the time they've picked us up till they dropped us off. Mohammed and Chocolate khan were incredibly wonderful person. I will definitely rent this company if I go back Dubai.

Pick up and drop off on time. John 007 was an excellent guide and driver. Camel ride was fun, food was good. Well worth the time.

The safari driver was rude and he avoided the dunas trip, he took us for a plain desert 🐫 road , the rest of the passengers are from India so he was speaking Hindu with them, one of the lady was so noisy and didn’t stop talking

Very poor. This is my second time (different company) doing a desert safari and was very disappointed. I specifically chose this trip because it didn't have sand bashing-which I already did and was not pleased. The attraction did include the sand bashing but my driver was kind enough to leave me at camp. ATV was another HUGE disappointment. The ride is in a circle around a small track for 10 minutes; it was a joke as were the camel rides. We were left at camp to sit and wait 2 hours in the heat for food and entertainment. Trip stated that soda/drinks were included but we were only offered small water while we waited for the camp to setup and begin their extravaganza (?) There was a group who was served various beverages before and I was informed they were "VIP" who also had their food served instead of waiting on a long line for a buffet.. Dinner was ok, 2*, dessert was horrible. We couldn't wait for the trip to end and was tempted to call a cab but we were clueless of our location in the desert. I'm a travel agent, trust me book elsewhere.

Venture into the desert and enjoy a complimentary quad bike ride at the desert camp, barbecue dinner and traditional Emirati entertainment on this 5 to 6 hour 4x4 safari from Dubai. As the sun starts to set, scale the dunes on your 4x4 and arrive at a Bedouin-style camp for shisha, Arabic coffee and dates. Then, take an exciting complimentary quad ride, watch henna artists at work, enjoy a camel ride, and admire impressive sand art. Finish with a barbecue dinner under the stars as you watch belly dancers and a ‘tanoura’ dance, with whirling dervish dancers spinning before you.

On Air Dinner Adventure in Dubai