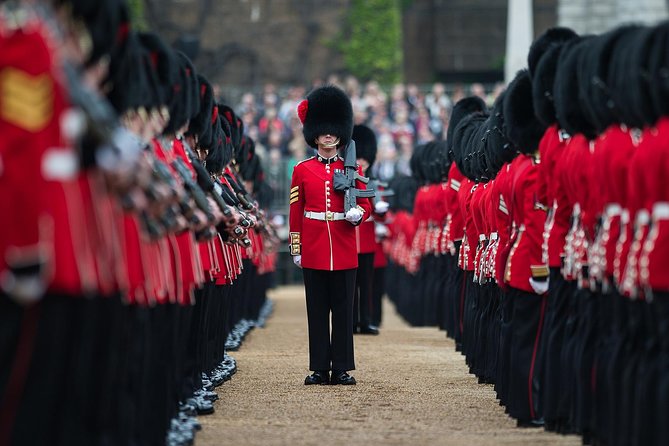 Put together your perfect day in London, and see the sights that you want to see on this half- or full-day tour with a private local guide. Customized entirely to your preferences, your itinerary is totally flexible, and your tour includes what you need to see London with ease: preplanned logistics and a knowledgeable guide. See the landmarks that give London its renowned reputation such as the Tower of London and Big Ben, and discover the secret streets and parks that only the locals know.

- Confirmation will be received at time of booking
- Not wheelchair accessible
- Near public transportation
- Not recommended for travelers with back problems
- No heart problems or other serious medical conditions
- Most travelers can participate
- This is a private tour/activity. Only your group will participate

The home of the Crown Jewel of England and the British executions since the Middle Ages.

The home of our beloved Queen Elizabeth II and a must-see for your visit in London.

We shall walk you up London's iconic foldable bridge. Fun times in London

Back to Shakespeare. This is the accurate reconstruction of the theatre in which William Shakespeare staged all his great plays. You will experience Shakespeare in the same way as Elizabeth I.

Pay your tribute. Princess Diana remains very dear to the hearts of the British.

The heart of the British Royals. Here is Buckingham Palace. Here are the Horse Guards. The Pelicans of the Royal Family

The masterpiece of Sir Christopher Wren, the symbol of London's rebirth after the Great Fire, and the great survivor of the air blitz during WWII

We'll take you along "Wobbly Bridge" for the bridge is famous "terminating vistas" - Saint Paul's cathedral on one side and tate Modern on the opposite side of the Tames River.

The Church for the Coronation and the burial site fo the Kings of England.

Shops and market and street artists since the 1600's. My Fair Lady was a flower seller there once.

Big Ben is not the clock Tower of London, it is the nickname for the great bell of the clock at the north end of Westminster.

London's most famous tradition. We will make sure you'll see the best of the changing of the guards

The most popular tourist attraction in the United Kingdom,even James Bond has ridden it. Now it is your turn.

Discover Walks is Europe's number one for custom private tours

Stop At: The View from The Shard, Joiner Street, London SE1 9QU England

London's newest icon. You can experience its observation deck. Just press on 72.

Together we shall experience the River that made Britian the most powerful Empire in the world.

When we take you there, we will explain all the behind the scene action taking place around you. We will even tell you what a Piccadill is. And why you want find any at Picadilly Circus.

Traveler pickup is offered
We meet you at your hotel, your residence, or any location you indicate in central London.
We are flexible and we offer a tailor-made tour.

Our day with tour guide Stepan was amazing- just the right pace and he was so knowledgeable. Considerate and kind as well.

Gary was amazing. We were in London because our daughter was going to Kings College for a semester. We told Gary that and we just wanted a tour to get her acquainted with London and shows us the sites. He spent 7 hours with us and did a great job. I highly recommend Gary for a personal tour.

Stefan was knowledgeable and flexible, driver (Paul?) was excellent and both conversational. We were exhausted from trip elsewhere and this was just our speed.

Tour guide, Davey was great. Very friendly took us all over the town and was knowledgeable of historical events. Helped us learn how to get around by subway which was helpful to our next day and getting to the airport. Highly recommend!

What can I say , from beginning to end Davey showed us everything was top notch. Catered to our needs with our kids kept it interesting throughout. Very informative and enjoyable. Recommend wo reservation.

We would highly recommend our tour guide,Davey.Due to our time constraints our tour was only 3.5 hours but he managed to cover quite a bit of ground for us . He was knowledgeable , funny and engaging .

Sam was our tour guide for our all day walking tour. He was very personable and knowledgeable. We were taken to all the important sites and Sam gave us a history lesson of London and the monarchy. We enjoyed the tour immensely.

James took me where ever I wanted to go at my fast pace. I saw 4-5 times more than I would have in a group tour.

James the tour guide on this tour is extremely knowledgable about all aspects of London, and seemingly knows everyone in the city as well. A fount of information on everything from history, to Royals, to music, to science, to pubs...just about everything. He's also a delight to know. I felt like this tour was worth every penny and will definitely be looking James up the next time I'm in London. You can't ask for a better private tour guide, and he will accommodate your person preferences in setting up the tour. Highly recommend.

We recently had the most wonderful trip.We went to London England for 3 days,then to Southampton for two days .then embarked on a 14 day Summer Solstice cruise to Norway.ending with 3 days in Windsor.The highlight of our London trip was an all day tour of London with JamesWe are still talking about his knowledge,his pride in England,his wonderful companionship,and his sense of humour-oh and his umbrella!!!We cannot thank James enough for the wonderful day he showed us-it was the best day ever.He also incorporated my love for all things Harry Potter into our day-Daigon Alley-Nocturne Alley,memorbilia.Thankyou James,that meant a lot to me.He took us to his favourits Pubs,with great new beer-and a Gin Pub.He picked us up at our hotel in Kensington,and took us back-as the tube was so very overwhelming-James was amazing-we learned so much history and saw everything we could see that day.-he was a walking encyclopedia.Thankyou Karolina Kruze for pairing him with us,and again Thankyou James-and don't wait too long to marry that beautiful girlfriend you have-life is too short.We also spent a wonderful day on the Isle of Wight at Queen Victoria and Alberts summer house.Loved every minute.Also 3 days at the Runnymeade on the Thames and absolutely loved Windsor.-and Norway was unbelieibly beautiful.We will always have these memories-and especially you James.Thankyou.

Put together your perfect day in London, and see the sights that you want to see on this half- or full-day tour with a private local guide. Customized entirely to your preferences, your itinerary is totally flexible, and your tour includes what you need to see London with ease: preplanned logistics and a knowledgeable guide. See the landmarks that give London its renowned reputation such as the Tower of London and Big Ben, and discover the secret streets and parks that only the locals know.