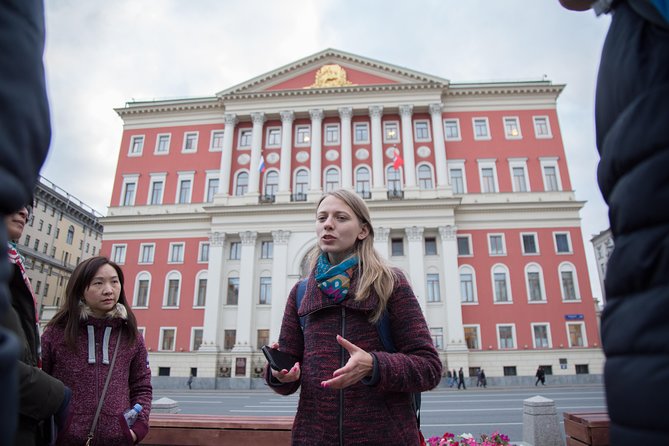 Discover hidden remnants of the Soviet communist regime on this 2-hour historical tour of Moscow, capital of the Soviet Empire for more than 70 years. With an informative local guide, you’ll learn all about the history of the Soviet Union, from the 1917 Great Socialist Revolution to Perestroika, and see important landmarks of the Soviet era, such as the former KGB headquarters and Revolution Square.

Numbers are limited to 20 on this small-group walking tour, ensuring you’ll enjoy personalized attention from your guide.

Originally built for the insurance company Rossiya, it later became better known for housing the headquarters of the KGB in its various incarnations. As of 2016 the Federal Security Service of the Russian Federation (FSB) occupies the building.

The Solovetsky Stone is a monument located in Lubyanka Square in Moscow, across from KGB headquarters. The monument consists of a large stone brought from the Solovetsky Islands, the location of Solovki prison camp, part of the Soviet Gulag system. The monument was erected in 1990 to honor victims of political suppression in the Soviet Union.

It is one of the Central Squares of Moscow.

Bolshoi Theater - is one of the world’s biggest opera and ballet theaters, rated as high as La Scala in Italy and Covent Garden in England. You can admire its magnificent building, which is also an outstanding example of Russian architecture.

Historical department story in the heart of Moscow

Statue of 'The Worker' by famous Soviet sculptor Matvey Manizer

Tverskaya is the main street of Moscow, it starts from the Kremlin and goes north through all Moscow to change into Leningradskoe shosse, which leads to Tver and after 700 km to St. Petersburg. Tverskaya street is a wide central avenue bustling with life, with large buildings on the sides where there are various shops, clubs, cafes, and restaurants inside.

The famous grocery store "Eliseevsky" is considered to be the first one in Moscow till now. Named in honour of its former owner and millionaire, Grigory Eliseev, the store became famous not only for its big variety of products, but for luxurious decoration of sales areas in Neo-Baroque taste.

It was a very cold night, but our guide made it worth it, she was super nice!
She shared a lot of stories and make good recommendations for our next stop

Anna, our guide was great, interesting and knowledgeable. I highly recommend this tour, especially with Anna.

In two hours, which passed very quickly, Helena provided a clear insight into the history of Russia from Tzar Nicholas through to post USSR. Interesting to learn the role of the Metropol Hotel and Bolshoi Theatre in the Revolution and to discover more about Moscow today.

Nice alternative views of soviet russia from insiders. Hidden stories of places.and.buildings. good recommendations! Very clear and perfect english, which is quite rare...

Elena is enthusiastic and articulate. One of the best tours we have taken. She represented multiple points of view of the Communist era, so you learn why people still miss communism and why it failed, and differing perceptions of pros and cons of former leaders. The meeting place is in the big plaza at the end of Nikolskaya street (which has overhead hanging lights) where it meets Lubyanka Sq. Across the street from the Children's department store building. Toured July 31, 2019. California.

A terrific tour that was both informative and enjoyable, and really added to my understanding of the city and its history. The guide was obviously very knowledgeable and put over the facts and figures in a very entertaining way. I'd thoroughly recommend the tour.

Our guide wove the history of the Soviet Union beautifully with this tour which covers only a short walking distance. We explored a bit of the city relevant to various political events starting opposite the Lubyanka, to Revolution Square, to the Bolshoi and Metropole Hotel (for Gentleman in Moscow fans) to Stalin having buildings moved to widen avenues, ending in Pushkin Square where the protests take place, in front of Izvestia offices Outstanding for history buffs.

We had a good walk around revolution square, the Bolshoi and a few other historic building and squares. It was a very cold walk at sub zero temperature. However, our tour guide Elena was very talkative and kept us warm with her stories of atrocities during the Soviet era. She was quite obsessed in criticizing the Bolsheviks, to the point of glorifying the Tsar period or worshipping the USA and the west. Partly the tour sounded like Lenin and Stalin bashing. I think it will be more appropriate if the tour give a more general overview of the communist transition to a more open society Moscow and the rest of Russia, without too focus trying to convince us that socialism or communism were really terrible. Overall I enjoyed the walk and we end up in a very beautiful supermarket.

Interesting for people who come to Moscow and wanna know a bit about the communist past of the city and the country. Nikita is a funny guide, has an pleasant way of telling, is easy going and open to questions. Recommend!

Great tour guide who had lots of knowledge and enthusiasm. This tour was full of historical facts, and how the past affects modern day Russia. It was really interesting and one of the best tours I took in Russia. Highly recommend!

Discover hidden remnants of the Soviet communist regime on this 2-hour historical tour of Moscow, capital of the Soviet Empire for more than 70 years. With an informative local guide, you’ll learn all about the history of the Soviet Union, from the 1917 Great Socialist Revolution to Perestroika, and see important landmarks of the Soviet era, such as the former KGB headquarters and Revolution Square.

Numbers are limited to 20 on this small-group walking tour, ensuring you’ll enjoy personalized attention from your guide.

Moscow's Above and Underground Private Tour with a Guide