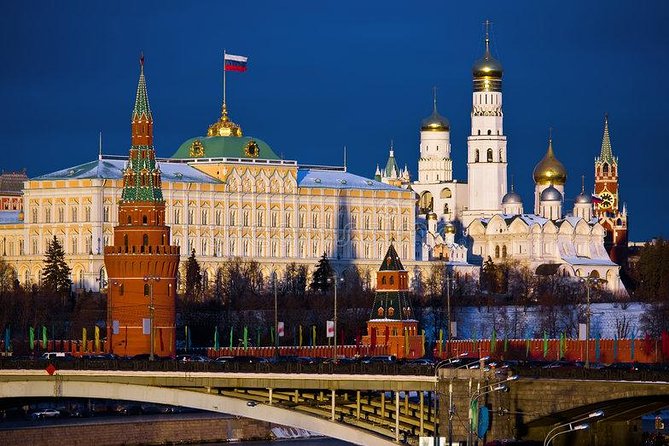 Take your chance to visit the legendary Kremlin, the symbol of Russian statehood. In 2 hours, explore an ancient fortress that was home to Russian tsars and communist leaders.

Meet your licenced Kremlin guide right in front of the ticket office in Alexander Garden and step into the Kremlin to enjoy a 2–hour visit to this epic medieval fortress. Gain insight into Russian heritage and culture and grab picturesque photo opportunities at the UNESCO World Heritage site.

Travel back to the 12th century, when Moscow was three times smaller than the present territory of the Kremlin. Visit the most ancient building in Moscow, the Assumption Cathedral, where the last Emperor of the Russian Empire was crowned. Listen to numerous stories about Russian Tsars and Tsarinas, boyards and patriarchs, the last Emperor and the communist government.

The tour will finish in the Kremlin and you will be able to continue exploring its monuments, museums and cathedrals.

Booked this tour and received no time to attend so I looked up the times that their tours begin and where they start. I showed up at the meetup point and stayed there for a period that would have allowed three tour groups to go but there was still no sign of the group. I sent an email to the tour company that morning and received a reply a number of hours later telling me to show up in the a half an hour. I had already organised another tour of the Kremlin at this stage.Poor organisation. Would not recommend.

Take your chance to visit the legendary Kremlin, the symbol of Russian statehood. In 2 hours, explore an ancient fortress that was home to Russian tsars and communist leaders.

Red Square and the Moscow Kremlin