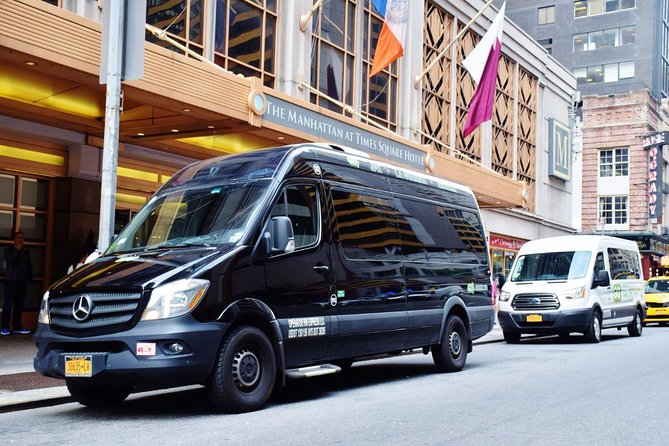 At the end of your time in New York, the last thing you want to do is find a cab and pay an exorbitant fee to get to the airport. Take the easy way with a pre-purchased transfer from your Manhattan hotel to JFK, Newark or La Guardia Airport! Transfers operate 24 hours a day, 7 days a week in modern, comfortable vans operated by a team of professional, trained and courteous drivers who know New York City.

Offering door-to-door service from your hotel to the airport, this New York departure shuttle transfer is an easy way to get to New York’s busy airports.

This transfer is available from MANHATTAN HOTELS only.

We pickup at Manhattan hotels only

Suppliers and travelers coordinate start times within the given time periods. NYC Hotels to JFK Airport 4/1/2019 - 3/31/2021

driver was early was just waiting for our bags and the poor guy got a ticket. Thought he was going to go insane but he was actually really nice and helpful. Very reasonable price :)

Driver arrived early and was very helpful. Excellent service and a reasonable cost .
We would book again

Very easy to find and was a quick and easy experience to get to our hotel. Staff were friendly and easy to talk to

The driver arrived on time. I was just leaving my room, but he waited for me. He was cordial and polite and he put my bags in and removed them with care. I arrived at the airport with more than enough time to spare. The van was clean and in good condition. I highly recommend.

I really liked the service, the driver is very polite and helpful, came in correct time. The van has a lot of space and very confortable for the passengers.
I would recommend this service for everybody.

Got us to the airport in one piece, New York is a crazy place in traffic.
Transport was new, comfortable but please make sure you wear your seatbelt.
The driver was the happiest person we had come into contact with during our time here so could over look the crazy driving for the entertainment factor.

I like Viator’s service, but would not choose a shared ride again. We were the first to be picked up, so it extended our ride by more than an hour. One passenger wasn’t down and waiting for the ride and another never showed up. Total inconsideration of others.

We’ve used Viatours for years and I’m always impressed with the speed and efficiency of the service. A budget transport but big on customer service and satisfaction. Yesterday’s journey however was the complete opposite.

The driver turned up 25 mins early early and just shrugged when I mentioned it. Not a great start. Luckily I was on the ball and we were there ready and waiting.

I appreciate a shared transfer is with other people via other local areas but we then drove from Central Park to the Bronx (over an hour away) with a bus full of people and only one empty seat for our final pick up, then back down to jFK. Surely the other was around would have been more direct. The driver constantly checked his sat nav whilst driving, to the point where he hit a wheel in the road as a taxi driver was changing a flat tyre and he probably would have hit the taxi driver had a fellow passenger not pointed him out last minute. The driver was rude cutting up other traffic and speeding down exit roads and then swerving across chevrons and cutting into queuing g traffic. This wasn’t just city driving it was dangerous and offensive. We arrived in one piece but then drove around the airport going past terminal 1 where 6+ people needed to exit and then past terminal 4 where one person needed to exit before stopping at terminal 8 to drop 2 people off and the doing a complete circuit of the airport again to drop at terminal 1. We did tip the driver but not sure why but when fellow passengers didn’t he just stood there with his hand out. Not a great experience and my first bad one with Viatours but it had made me think I won’t be using theme again. After requesting a transfer where we arrived at JFK when our check in opened 3 hours before our flight we arrived 1 hour 15 minutes before our check in closed. Security was rammed and it was all rushed and the whole time was spent panicking about missing our flight through no fault of our own.

It took hours before pickup-time.
No flexibility at all and the price for the shared departure “service” was the same as the yellow cab we took instead of the shared service.

We had a terrible experience with the go airlink company from start to finish. We travelled to New York for our honey moon.

When our driver collected us from the airport at JFK he asked for proof of travel and payment. Immediately we gave him the electronic evidence that we had pre paid. On doing this the driver turned around to the airport travel desk and began to rant/moan about us. Right in front of us! He then turned back to us and demanded a paper version (which luckily we had). His manor was appalling from start to finish. He tutted when a woman’s son had gone to the toilet after they had waited for over an hour for their pickup and then then went to the toilet himself.
A woman travelling on her own in the shared transport was left at the side of the road when the driver said he didn’t want to wait in traffic. Despite the woman saying she didn’t know her way round New York he still pulled over and put her luggage on the side of the road forcing her to get out the van. We arrived safely at our desired hotel.

The night before we were due to leave New York we called the go airlink company as requested to arrange a collection time. The person on the phone was extremely helpful and advised us to wait in the lobby for the chosen time.

The next day came. After waiting for 30 minutes and no driver had turned up for us I enquired at the hotel concierge desk. After seeing another go airlink member in the lobby and asking them if they knew where our lift was (unfortunately they were unable to help) we were told by hotel staff that they are forbidden to enter the lobby. Communication error perhaps? Seeing as the go airlink staff told us to wait it in the lobby, we saw another member of go airlink in the lobby and yet hotel staff told us they weren’t allowed inside?

When we got through to the company again they told us our driver had been and gone! Not helpful news when trying to get to the airport on time to catch a flight. A little disgruntled we arranged another transfer with them (no extra costs) seeing as we explained the situation. We must say that the driver who picked us up this time was lovely! Very friendly chap. Our journey back to the airport was successful once in the van.

At the end of your time in New York, the last thing you want to do is find a cab and pay an exorbitant fee to get to the airport. Take the easy way with a pre-purchased transfer from your Manhattan hotel to JFK, Newark or La Guardia Airport! Transfers operate 24 hours a day, 7 days a week in modern, comfortable vans operated by a team of professional, trained and courteous drivers who know New York City.

NYC Airport (JFK, EWR, LGA) Transfer to and from Manhattan