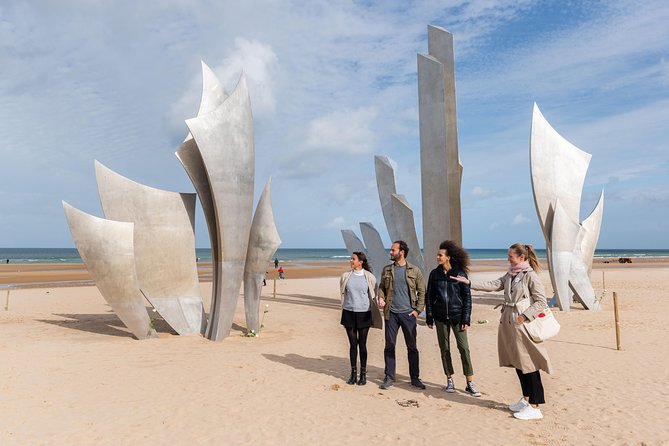 On your pilgrimage from Paris to Normandy, leave the details to us.In one unforgettable day,including a scenic lunch,we’ll take you to experience history where it happened. What better way to honor the sacrifices that changed the course of WW2?You’ll visit legendary Omaha Beach and remnants of the Arromanches artificial harbor left by allied forces,and get fascinating insights into those fateful days, learning just some of the incredible stories at the Visitor Center.Take the Memorial Drive along Juno and Gold Beaches,names that will echo with meaning for all eternity.Pause to reflect in the solemn setting of the pristine American Cemetery.Relive the drama and heartache of WW2 at the unmissable Caen Memorial Museum. Your guide will bring memories to life and help you gain a special understanding of what the Allied soldiers faced and why French locals are still so grateful to the Liberation forces. If you want, when booking, upgrade to a small-group tour for a more personal experience.

- Confirmation will be received at time of booking
- The coach journey from Paris to Normandy takes approximately 3 - 4 hours and you will spend 4 hours in Normandy itself
- Not wheelchair accessible
- Stroller accessible
- Near public transportation
- Possibility to buy souvenirs at the Caen Memorial Museum's Boutique.
- Toilets are available at the Caen Memorial Museum, American Cementery, Juno Beach Center, at the comfort stop and possibly inside the bus
- A warm coat is recommended during the winter period, a raincoat during the summer and a good pair of walking / flat shoes are suggested to avoid discomfort
- Please advise at the time of the booking of any allergies or dietary restrictions
- Template Menu : Selection of country style starters: Vegetable platted with grated carrots, tomato salad, beetroot salad, taboulleh and salad Main course: Chicken fillet with cider sauce, potato gratin, green beans Cheese buffet Dessert: Normandy style selection of desserts: apple tart, teurgoule (cinnamon rice pudding), baked apple Drinks: Bordeaux wine, farmhouse cider and mineral water (1 bottle for 4 people) +Coffee * Vegetarian dish on request on the spot
- Travelers should have a moderate physical fitness level
- This experience requires good weather. If it’s canceled due to poor weather, you’ll be offered a different date or a full refund
- This experience requires a minimum number of travelers. If it’s canceled because the minimum isn’t met, you’ll be offered a different date/experience or a full refund
- This tour/activity will have a maximum of 8 travelers

We make it so easy for you to get to Normandy and all the highlights. Choose from large- or small-group options depending on your budget and how you want to experience this outstanding day.

Let us do the driving while you discover history. Your Normandy day trip from Paris starts with the 3-4-hour drive to France’s northwest coast

Appreciate views of the changing French countryside, and stop at the award-winning Caen Memorial for a fascinating journey through WW2 and the D-Day landings.

you will start the tour by visiting the Caen Memorial Museum, recounting the history of World War II and the D-Day Landing. Then Lunch will be served at the Memorial of Caen with a 3-course menu with wine, apple cider and coffee.For those with free lunch, The guide will suggest places to grab a snack.

Short photo-stop at Omaha Beach, where the Allied took advantage of the Germans

You will then be able to pay your respects in the eery calm of the American Cemetery and Memorial, where nearly 10,000 US military war dead lie in this most humbling tribute.

Or a stop at the Juno Beach Center, witness of the Canadian soldiers' struggle to end the Nazi tyranny.

Stop at this famous place to take some memorable pictures

Time to return back to Paris!

You will be dropped at the departure point in central Paris bearby the Louvre. Unless you have opted for minibus tour or pivk up and drop option, a driver will take you back to your hotel in Paris

Traveler pickup is offered
If Pick-up Option Selected: Hotel pickup is offered. Pick up location will be from the hotel or accommodation in Paris (Zip code must start by 75). The address must be provided to us at least 72 hours (local time) prior to tour's departure. Without the accommodation address and if booking is made less than 72 hours (local time) prior to departure, the pick up will be from PARISCityVISION on 2 rue des Pyramides, nearest Metro : Tuileries or Pyramides (line 1 or 7/14)

My family really enjoyed our entire day of touring Normandy-
The guide was efficient, somewhat friendly and extremely knowledgeable.
The lunch that was at this lovely hotel was 5 stars! A real treat. It was an
terrific experience for my entire family ages 18 thru 55.

Excellent tour guide...Francoise...she was extremely knowledgeable about WW l and WW ll and all the events leading up to, during and after those wars. A very moving experience to Pointe Du Hoc, Omaha Beach, Juno Beach. The museum was excellent, as was the delicious lunch. The cemetery sight brought to mind the sacrifices of those who fought for our freedom. Very sobering....

This excursion is relaxing, educational, and provides an amazing lunch. I strongly recommend it, as there is no hassle, no stress, and easy to find meeting location. We are grateful we chose Viator for this D-Day trip.

My late father landed on Omaha Beach on June 6, 1944. He fought his wag off the beach and then continued to fight through France and Germany. It was my wish to visit this beach and the others along the coast, and to hear the history of the liberation of the villages in Normandy in which he participated. Our guide was very knowledgeable and inquired about my father’s unit.
May the souls of those lost on those beaches rest in eternal peace may all the families of both the fallen and the living live with pride in their hearts. everyone should spend time in Normandy. It is the heritage of mankind. This trip was long but perfect.

This was great trip. The major stops were well worth it. I would recommend staying an extra hour at the last stop to have an early dinner versus stopping halfway back at a gas station to pick up a snack.

Beaches impressive. Arrived too late to view Juno museum. At 430.pm. With a 5PM closure, not aĺlowed entry. Only saw gift shop. Staff busy talking to each other.
DISAPPOINTED

The trip itself was fine. Our guide was nice enough but very dry and a little lackluster. She had no interesting anecdotes or tidbits to spice the trip up a bit. As a French teacher in the US, I’ve been there many times; Consequently, I do have a comparisons. My son had never been there before and I was disappointed for him. I paid for a taxi home and one never arrived. The guide did offer to call a cab, but it was late, cold and rainy. We took the subway rather than wait.

Three stars because seeing Normandy beach and the cemeteries contributes to one's education in ways that reading about the events and seeing pictures do not--though not all are so fortunate to have the choice of visiting the sites. However, the museum is just 2.5 stars; it doesn't add anything new to what is found in the typical American school textbook. Unfortunately, it distances the visitor from the Nazi side so much that the visitor has a hard time understanding the persuasiveness of the Nazis--and that means that the visitor doesn't leave with a sense of fear and a need to be on guard so as to prevent such a thing in the future; instead, the visitor is led to believe they might never be fooled or persuaded because the Nazis were such obvious monsters (and that is obvious to us today--hindsight is always 20/20). Perhaps I am a greater critique having visited such museums as the Resistance Museum in Amsterdam, which did leave me horrified and also gave me insight to how a wolf tricks little red riding hood, so to speak.

Also, the food at the museum was absolutely terrible! The chicken was so dry that even the sauce put on top of it couldn't save it, and the green beans were so mushy, they could have been mashed into baby food with one's fork. BUY or BRING YOUR OWN FOOD!!!

As for the tour its self, our guide seemed a bit bored, reciting numbers and history that if one doesn't know, one should be ashamed. Usually on such tours, I learn details that are important to those living at the place or during the time that only make it to the more in-depth books.

Additionally, we rode for hours on the bus with no water unless we brought it ourselves, and then we got caught in traffic. When we finally stopped, the line for the bathroom had two bus loads of people in it. So, imagine standing in line for the bathroom, then desperately trying to buy some water---for that is another long line--and getting it all done in less than 30 minutes to make it back to the bus. This tour left at 7:30 AM and returned at around 9 PM. They did say it was so late because of traffic.

The beginning of the trip was very disorganized and little help to find the correct bus. The bus itself was nice and comfortable. We could barely understand our guide. Her English was not very understandable (at least to our ears) and others commented on it, too, which made us tend to have to work very hard to understand what she was saying. We would have been much happier to have had more time at the museums/cemetery without such a long lunch stop.

Our van was comfortable and the tour went as planned, but our tour guide had issues.
Sebastian was very kind and shared a lot about the history on our drive to Normandy. The problem was that his English was not clear enough to understand.
The other BIG issue was that on the drive home he swerved suddenly twice and we’re pretty sure was falling asleep while driving. Not acceptable!
In the end, we wish we had taken the train to and from the Normandy area and picked up with a tour company there.

On your pilgrimage from Paris to Normandy, leave the details to us.In one unforgettable day,including a scenic lunch,we’ll take you to experience history where it happened. What better way to honor the sacrifices that changed the course of WW2?You’ll visit legendary Omaha Beach and remnants of the Arromanches artificial harbor left by allied forces,and get fascinating insights into those fateful days, learning just some of the incredible stories at the Visitor Center.Take the Memorial Drive along Juno and Gold Beaches,names that will echo with meaning for all eternity.Pause to reflect in the solemn setting of the pristine American Cemetery.Relive the drama and heartache of WW2 at the unmissable Caen Memorial Museum. Your guide will bring memories to life and help you gain a special understanding of what the Allied soldiers faced and why French locals are still so grateful to the Liberation forces. If you want, when booking, upgrade to a small-group tour for a more personal experience.

Palace of Versailles Skip The Line from Paris with Transfer

Tour from Paris with Chambord, Chenonceau and Wine tastings

Paris to Bruges Full-Day Trip with Transport and Walking Tour