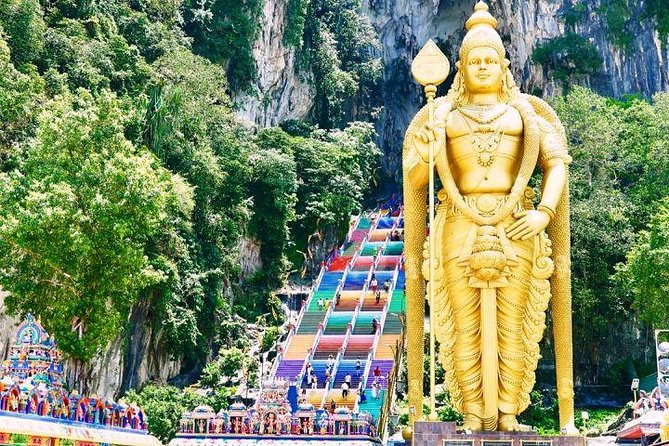 Venture north into Malaysia and visit Kuala Lumpur and Malacca on this full-day semi-guided small-group trip from Singapore. Spend the morning sightseeing in Kuala Lumpur stopping by famous landmarks like the Batu Caves, National Palace, Independence Square, National Mosque, Petronas Twin Towers (exterior visit), as well as the Kuala Lumpur Tower (interior visit). In the afternoon, you will continue on to Malacca to experience the colonial-era charms of a UNESCO World Heritage Site onboard a scenic river cruise. Admission tickets to the observation deck of Kuala Lumpur Tower, Malacca Tower and Malacca River Cruise are included.

- Confirmation will be received at time of booking
- Not wheelchair accessible
- A current valid passport and immigration slip (a white piece of paper issued to you when you enter Singapore) are required on the day of travel
- Date of birth and weight for all participants are required at time of booking to join the included river cruise
- All visa requirements to enter Malaysia are the sole responsibility of the traveler
- Operates in all weather conditions, please dress appropriately
- Booster seat for infant is not available
- Trunk space for large bags/luggages is not available as this is a small-group (non-private) minivan trip
- Please inform at time of booking if you need to end the tour at Malacca or Johor Bahru
- Any alcohol/tobacco products or chewing gum brought/bought during this tour must be fully consumed before re-entering Singapore in the evening
- Most travelers can participate
- This tour/activity will have a maximum of 9 travelers

Begin with an early morning pickup at your Singapore hotel. Relax into the leather seats of your small group, air-conditioned deluxe minivan as your driver crosses the Singapore-Malaysia drive-through border (no standing in line) and enjoy the 4-hour chauffeured drive to Batu Caves. Depending on traffic conditions, you will arrive at Batu Caves at about 8:00 AM where your KL tour guide will meet you to explain about the caves, and to have breakfast at your own expense. The limestone forming Batu Caves is said to be around 400 million years old. Batu Caves was founded by K. Thamboosamy Pillai, an Indian trader in 1891, as a Hindu Temple dedicated to Lord Murugan. A 42.7-metre high gold-painted statue of Lord Murugan was unveiled in January 2006, having taken 3 years to construct. It is the tallest Lord Murugan statue in the world.

After visiting Batu Caves, sit back as your KL tour guide escorts you around KL to discover the true beauty of Malaysia’s capital. 20 minutes drive from Batu Caves is the Istana Negara (National Palace). It is the official residence of the Yang di-Pertuan Agong, the monarch of Malaysia. The palace complex has an area of 97.65 hectares, 22 domes, and is split into three main portions: the Formal Component, Royal Component and Administration Component.

10 minutes drive from the National Palace is the National Mosque The Sunni Islamic mosque was built in 1965 in a bold and modern approach, symbolic of the aspirations of a newly independent Malaysia. Its key features are a 73-metre-high (240 ft) minaret and a 16-pointed star concrete main roof - reminiscent of an open umbrella which is synonymous with the tropics.

Located near the National Mosque is the National Monument and Independence Square (Merdeka Square). This is the historical place where the Union flag was lowered and the national flag was raised for the very first time at the struck of midnight of 31st August 1957.

From the Independence Square, you will have a vantage view of the Royal Selangor Club. The club was founded in 1884 and originally served as a meeting place for high ranked and educated members of the British colonial society. Selangor is the name of the state in which the capital - Kuala Lumpur is located.

From the Independence Square, you will have a vantage view of the Sultan Abdul Samad building, which is among Kuala Lumpur’s earliest Moorish-style buildings. It was built in 1897 and was named after the reigning sultan of Selangor at the time. The distinguished landmark originally served as the offices for the colonial British administration and the superior courts of Malaysia.

Interior visit: Located near the Independence Square is the KL Tower (Menara Kuala Lumpur). The 421m KL Tower is used primarily for telecommunications). You will visit its observation deck for spectacular views of KL.

Your driver will then proceed from Kuala Lumpur to Malacca River Cruise boarding point. Upon arrival in Malacca, hop onboard a scenic river cruise that will sail you past the highlights of UNESCO Malacca. Spanning 10km (45 minutes round-trip), Malacca river was once dubbed the "Venice of the East" by European seafarers as it was a prominent port of entry for traders from Europe and Asia during the late 16th century. You may ask your river cruise boatman to help you spot the monitor lizards residing within the mangrove swamps along parts of the Malacca River.

During the river cruise, you will sail past the Middleburg Bastion. After conquering Malacca in 1641, the Dutch constructed the bastion which is strategically located at the mouth of Malacca River to strengthen the existing city defence left behind by the Portuguese.

During the river cruise, you will sail past the Dutch Square. Dutch Square is distinguished by a group of bright, terracotta-red colonial Dutch buildings, built between 1650 and 1750, with louvered windows and chunky doors with wrought iron hinges.

During the river cruise, you will sail past this twin-spired neo-gothic structure that was built in 1849, in honour of St. Francis Xavier, a prominent 16th-century Catholic missionary also known as "Apostle of the East".

During the river cruise, you will sail past this historical village (Kampung Morten) which is named after a British land revenue collector during the British Malaya, Frederick Joseph Morten. houses more than 100 traditional Malay houses, many of them built without the use of any nails.

After 45 minutes, the river cruise will bring you back to the initial Malacca River Cruise boarding point to find your driver. Next, you may ask your driver for a Malacca walking map for further self-exploration nearby. You may walk to see the famous Flora De La Mar which is translated as Flower Of The Sea in English. Situated near the mouth of the Malacca River, this is the site of a replica of the Portuguese ship that sank off the coast of Malacca on its return trip to Portugal in 1512, carrying with it treasures from Malacca. Alternatively, you may walk to the nearby Hard Rock Shop for souvenirs, or the nearby local cafes for dinner at your own expense.

Finally after 2 hours around Malacca, head back to Malacca River Cruise boarding point to find your driver who will bring you to Malacca Tower (Menara Taming Sari) for more breath-taking views of UNESCO Malacca and the Straits Of Malacca, before being chauffeured back to Singapore through the drive-through border (no standing in line). Subject to actual border conditions, you should be back at your Singapore hotel at around 10:00 PM in the evening.

What a wonderful experience!!! It was a long day, but both our drivers were great. We were able to sleep most of the way to KL. On our arrival at Batu caves, we were met by our outstanding tour guide. Rosie. She made our morning with her come to life!!!

Venture north into Malaysia and visit Kuala Lumpur and Malacca on this full-day semi-guided small-group trip from Singapore. Spend the morning sightseeing in Kuala Lumpur stopping by famous landmarks like the Batu Caves, National Palace, Independence Square, National Mosque, Petronas Twin Towers (exterior visit), as well as the Kuala Lumpur Tower (interior visit). In the afternoon, you will continue on to Malacca to experience the colonial-era charms of a UNESCO World Heritage Site onboard a scenic river cruise. Admission tickets to the observation deck of Kuala Lumpur Tower, Malacca Tower and Malacca River Cruise are included.

Batam Private Tour from Singapore with Ferry Ticket and Lunch

A Historical Tour of Malacca