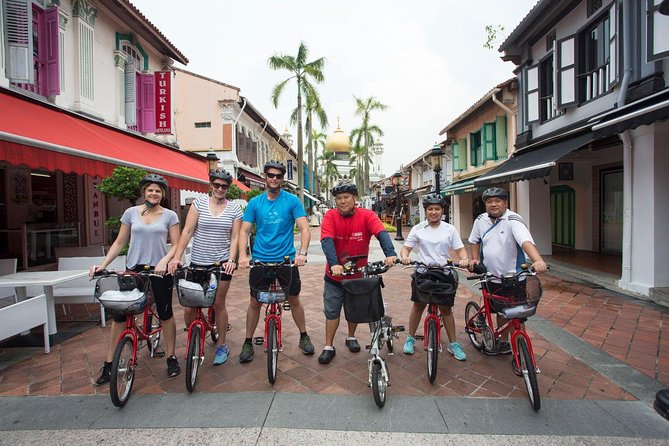 Hop aboard two wheels and take in all the iconic sites of Singapore on this ultimate intro to the city! Pedal through the city’s oldest neighbourhood, biggest cultural hub, and along the famed Marina Bay as you zip in and out of Singapore’s nooks and crannies.

- Confirmation will be received at time of booking
- Please dress light and wear shorts and sports shoes comfortable for biking. Bring sunscreen.
- We will need to know the height and weight of all the travellers on your booking, in order to determine your bike sizes. Please indicate this in the “Additional request” box at checkout, or by emailing us.
- Small-group tour with a maximum of 12 people ensures a more personalized experience
- Not wheelchair accessible
- Not recommended for pregnant travelers
- Travelers should have a moderate physical fitness level
- This experience requires good weather. If it’s canceled due to poor weather, you’ll be offered a different date or a full refund
- This tour/activity will have a maximum of 12 travelers

This Singapore bike tour shows you the best of the city’s sights, all aboard two wheels! Zip through the city via the biggest cultural enclave, where new and old converge. Experience the oldest residential zone, where British-era buildings still stand. Ride along the beautiful and historical Singapore River and learn how it was the heart of the city’s commercial development. We’ve crammed it all into this epic ride!

Along the way, we’ll take a break to stretch our legs, and you’ll have the option of sipping some local coffee, or cooling off with a glass of refreshing calamansi juice (a local treat similar to lemonade). We’ll also refuel with a delectable local snack such as kaya toast (bread or crackers topped with a mix of coconut milk, butter, and sugar).

Our biking adventure will include a visit to the cultural enclave of Kampong Glam, a historic district where Malays and Arabs once settled. We’ll zip through the nooks and crannies, where rows of boutique shops and Middle Eastern cafés beckon locals. You’ll have lots of opportunities to stop and snap photos, and you’ll hear intriguing stories (with a bit of trivia!) from your local expert guide. From there, we’ll explore Bussorah Street, often referred to as Little Istanbul. Here, you’ll find many Turkish diners and shops selling souvenirs.

As the morning heat builds up, we’ll take a respite from the sun by cooling off at the Malay Heritage Centre. Here we can top up our water bottles with ice-cold water from the cooler provided.

Our bike tour will continue along Beach Road, which was once the coastline of the city but has since been pushed inland to accommodate land being reclaimed for buildings and businesses. Imagine, almost 13,000 football fields’ worth of land has been reclaimed since the 1960s!

As we cycle, we can marvel over the architecture along the coastline, where many of the buildings were built based on Chinese feng shui. We’ll eventually reach the famous Raffles Hotel, which is the jewel in the crown of our hotels in Singapore. It’s also home to the beloved Singapore sling — a pineapple cocktail made with gin. This 128-year-old building was once a bungalow by the beach, visited by many famous people, including Queen Elizabeth II and Michael Jackson.

We’ll finish up our Singapore tour with a visit to the colonial district, where you can see buildings that remind you of the old British rule. For the grand finale we’ll catch a glimpse of the beautiful waterfront at Marina Bay, including the spectacular Marina Bay Sands — a resort that cost a whopping USD 5.7 billion to build.

Rene was an excellent guide and packed a wealth of information into our 4 hour tour of Singapore. It was a great way to get over our jet lag and get a valuable introduction to the city. The bikes were in great shape and easy to handle. I highly recommend this tour.

This was a very good tour. You see all the areas of the city near downtown. Best to do your first day here to get the lay of the land. Not much in terms of bike trails here... most of the riding is on sidewalks and side streets, The guide is very informative and fun.

I LOVED this tour! I’m not a confident bike rider and my guide Rene looked after me so well and we cycled at my pace! I was given lots of useful information on the sights during the tour. I got to cover most of the city which was perfect for the short time I was in Singapore- highly recommended!

Really a great way to see the sites, Im not the fittest but coped fine, very flat with lots of stops for talk on areas

We highly recommend this tour, we covered a lot of places. Rene our tour guide is very knowledgable about the culture and history of Singapore. Very funny guy! We will definitely book a bike tour again with Rene in Palau Ubin next time we visit Singapore.

Had a great half day tour with Renee, who was friendly, helpful and informative. The tour covered many areas of Singapore and included a nice resting point at a cafe for a local cool refreshment and snack. The tour was well paced, allowed stops and catered for all ages and interests. We got a sense of the real Singapore, including insights into daily life, social systems, history and future aspirations. Definitely recommend.

Excellent and informative! Would highly recommend even in Singapore's heat! Our guide Rene was fantastic and very knowledgeable!

A great way to get an overview of Singapore. Rene was very knowledgeable and engaging and also full of local tips. I really enjoyed the tour and would recommend. Good to do on the first day of any stay in the country.

A wonderful experience - our guide was knowledgeable, flexible, caring and funny. All family members enjoyed exploring Singapore in this way and the service, bike quality and ice-cream from the street vender were top class:

Hop aboard two wheels and take in all the iconic sites of Singapore on this ultimate intro to the city! Pedal through the city’s oldest neighbourhood, biggest cultural hub, and along the famed Marina Bay as you zip in and out of Singapore’s nooks and crannies.

Small-Group Food Tour With Hawker Centre. Eat Like A Local!

Private Customized Tour of Singapore - Half Day or Full Day