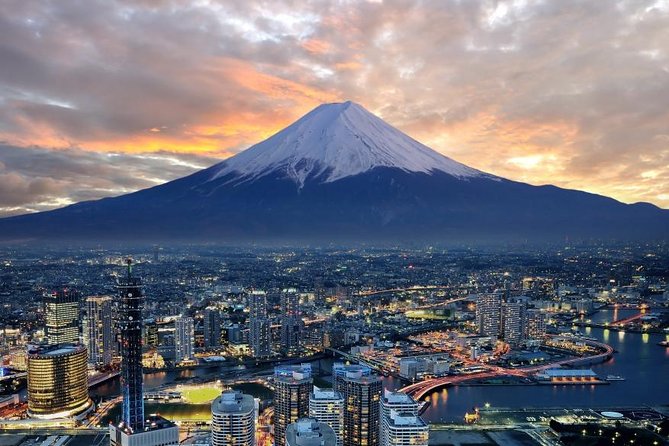 See the famous sights around Tokyo on this private tour, which saves you time figuring out public transportation or worrying about navigation. It’s an ideal trip for those looking for a break from the city’s hustle and bustle. There’s so much to see in the area, and this flexible tour takes you straight to what interests you most. Simply choose between visiting Mt. Fuji or Hakone and let your guide lead the way.

- Confirmation will be received at time of booking
- Not wheelchair accessible
- Our Chauffeurs
- All our drivers are licensed professionals and speak both English and Japanese. With over 30 years of experience on Japan’s roads, they will ensure your journey is safe, convenient and enjoyable.
- Our Fleet
- All our vehicles are clean, modern and highly maintained.
- This is a private tour/activity. Only your group will participate

Your day begins with pickup in an air-conditioned minivan from your desired central Tokyo location. The tour is fully customizable depending on your interests, and you’ll have a list of activities to choose from.

Your choice of activities near the five lakes of Mt. Fuji include a sake brewery and whiskey distillery, Narusawa’s ice and wind caves, Itchiku Kubota museum, Oishi Park, Oshino Hakkai village, and Arakura Sengen shrine. If you wish to learn more about the history Mt. Fuji and its worship culture, you can do so at Fuji World Heritage center.

The second set of potential activities are near Hakone. Choose from Onshi Hakone Park, Hakone Shrine, Komagatone Ropeway, lake cruising, volcanic activity at Owakudani Valley, Odawara Castle, or visiting to shops to buy local crafts. You can even opt to end the day in a hot spring before returning to your hotel.

Traveler pickup is offered
We pick up from any hotels in Tokyo.

This was absolutely the worst experience and tour ever. I booked a private tour to help bypass the crowd of doing a group tour and it was the biggest mistake I made. The driver had absolutely no idea what he was doing and admitted that this was his first day on the job (he admitted to this later when I was returning from the trip rather than departing). The driver got lost several times and would stop in the middle of the road during rush-hour traffic which was very scary. The car also smelled entirely of cigarettes and smoke which made me nauseous since it was a 2 hour ride to Mount fuji and back. The biggest regret was that I didn't even get to see Mount Fuji. The driver dropped us off at some cable-cart ride, where that was the only option to see Mount Fuji. This was never mentioned in the 1-day charter tour. In addition, the charter clearly stated that it would be an english-speaking driver, however, the driver barely spoke any english at all. It was difficult to communicate with him throughout the trip. He also kept calling his contacts to figure out where he was. At one point, he got out of the car and flagged down a random person to help him with directions. Fortunately, the passenger in the other car offered to drive and provide directions. We were lost for about an hour before we got back on the freeway. Although the trip was supposed to end at 4 pm, I was so anxious for safety issues that I had to cut the trip short at 1:30.

After the trip, I called viator and I spent 1-2 hours on the phone explaining my horrible experience. I explained the details of the trip with customer support. To my surprise, they offered me a new trip (which I would have to pay) and then asked for a credit card number. I was so disappointed in the previous Viator trip, that I was hesitant about booking another trip through Viator. The customer service representative told me I would be reimbursed but at the end of the day, I was only offered 10% of the cost of the trip, essentially boiling down to 60 bucks. The trip that I had paid for was $600. I am disappointed with the experience of the trip but more disappointed that Viator thinks that 10% compensation is acceptable.

I will definitely think twice before booking another trip with Viator. Although I thought they were a reputable company, it seems that they do not screen properly.

See the famous sights around Tokyo on this private tour, which saves you time figuring out public transportation or worrying about navigation. It’s an ideal trip for those looking for a break from the city’s hustle and bustle. There’s so much to see in the area, and this flexible tour takes you straight to what interests you most. Simply choose between visiting Mt. Fuji or Hakone and let your guide lead the way.

Special Access at Toyosu Fish Market with Hotel Pick Up