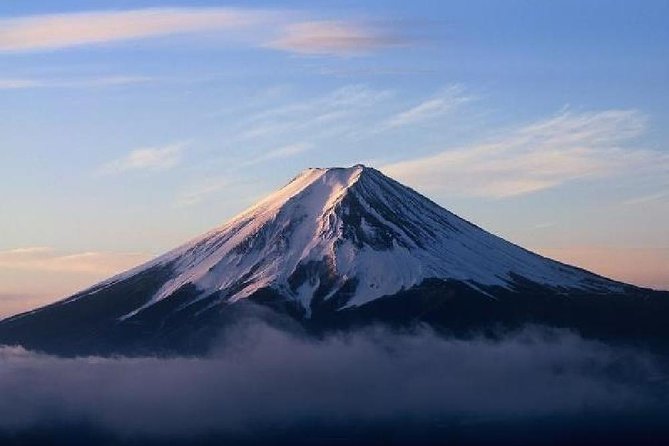 Discover some of Japan’s most famous highlights on a full-day guided tour from Tokyo. Travel to Mt Fuji’s bustling 5th Station and learn about the revered mountain. Continue to nearby Lake Ashi for a short boat cruise, followed by a ride on the Mt Komagatake Ropeway. Climb by aerial tram to the top of Mt Komagatake and get fantastic views of the Owakudani volcanic valley, Lake Ashi and Mt Fuji. Return to Tokyo by bullet train in the evening. Enjoy the ease of included transportation, entry fees and a knowledgeable guide.

- Confirmation will be received within 48 hours of booking, subject to availability
- Please make sure to specify the meeting location at the time of booking. Please be aware that the specified meeting location and drop-off location may not be changed on the day of the tour. The bus may not stop by meeting locations and drop-off locations for which there are no prior reservations.
- Wheelchair access – please contact local supplier at the time of booking. Wheelchair on the day of departure must be foldable. Passenger must provide their own caretaker.
- If Mt. Fuji's 5th Station cannot be reached due to road surface freezing, an accident on the Fuji Subaru Line, or weather conditions, the tour will be taken to the highest elevation point possible. No alternative destinations are planned when the tour reaches beyond the 1st Station. When the tour has to turn back at the 1st Station, or when the Fuji Subaru Line is completely blocked, the tour will visit Fujisan World Heritage Center or Lake Kawaguchi Oishi Park. Please note that an alternative itinerary may also be omitted depending on road conditions.
- Due to weather conditions, Mt. Fuji may not be visible even from the base. However, the tour will not be cancelled and refunds will not be given for this reason.
- If the Lake Ashi cruise or Komagatake Ropeway cannot be boarded (when not visitable due to suspension of operation, road congestion, or conditions at other sightseeing areas), the tour will be guided to one of the following alternative destinations. Hakone Venetian Glass Museum, Hakone-en Aquarium, Hakone Ropeway, Hakone Pirate Ship, Narukawa Art Museum, Hakone Checkpoint, Lake Kawaguchi Cruise, Mt. Fuji Panoramic Ropeway, Itchiku Kubota Art Museum, Hakone Shrine, Oshino Shinobi no Sato, etc.
- Arrival time at each location may vary depending on the season and day of the week due to traffic conditions, and may be considerably delayed.
- Transportation may be delayed by traffic congestion. Even if you miss your Shinkansen after disembarking at Odawara Station due to a delay, no refunds will be given. Please ride the next train in the Non-reserved section. If you plan on taking a Shinkansen after the tour ends, please make sure to choose a Shinkansen departing Odawara Station at 19:00 or later.
- Not wheelchair accessible
- Near public transportation
- Infants must sit on laps
- No heart problems or other serious medical conditions
- Children up to 5 years old may join free of charge, but will not be provided with bus seats or lunch. If bus seats or lunch is required, please make a booking under the child rate.
- Vegetarian meals are available and must be requested at the time of booking. - Allergy-friendly meals, etc. are not available. Customers with allergies should reserve the tour without lunch included.
- Travelers should have a moderate physical fitness level
- This tour/activity will have a maximum of 40 travelers

It was a great tour that included event more that we anticipated. Lunch was very traditional and we enjoyed scenic views of the lake. going during the COVID-19 outbreak meant that we received even more attention since they were only 10 of us in total.

We had a great trip and the view was amazing. There was a strong wind the day before so we had no clouds and a perfect view. The tour guide took good care of us and we enjoyed the trip.

This trip was fantastic from start to finish our guide Taki was great as we were travelling to each destination he gave lots of information about the areas we were traveling through and also some of the history of those places. I would recommend the lunch package as it was a large and very traditional japanese meal.

Such a great day.We were so lucky to go to 4th level viewing as Mt Fuji was NOT shy.Stunning
! Delicious lunch and great all round trip .Snowed during boat ride and ropeway but it is winter .We went home by bullet train and that was only 30 minutes back to Toyko...Highly recommended

We thoroughly enjoyed our visit to Mt Fuji as we had picture perfect weather. The drive to Mt Fuji itself is long but Toto our guide kept us informed the whole way with information about Tokyo and its history. Toto also was attentive to our needs to make certain we knew the times and place of meeting points. She also accompanied us on the train back to Tokyo station. You have to give her commendation for doing that, You don’t spend a long time at the station on Mt Fuji itself. At the lunch stop we got a fantastic view of Mt Fuji. We did not purchase the lunch option at the restaurant, If you decide not to purchase lunch you will need to either bring food with you or you can purchase snacks at Mt Fuji station. Lake Ashi was a beautiful ride to cable car. As mentioned the weather was perfect that day. At top of cable car we got a fantastic view of Mt Fuji as it was clear sunny sky. It’s a long day but we were so happy to see Mt Fuji.

The trip from Tokyo to My. Fuji was overall really good.

We were taken by taxi to another meeting point in Tokyo, to meet up with the majority of the tour group.
The bus was clean, if with quite narrow seats, so best if you're comfortable sitting close with your seating companion.

The visitor center at the base of Mt Fuji offered close up pictures of the snow covered mountain, and had a video and some information boards inside the building.
Due to heavy snow the day before we were unable to go further than 1st base, so we didn't really get to go up far on the mountain unfortunately.

We had a Japanese inspired lunch catering to the adventurous and those accustomed to Japanese food. I ate all, but most others hardly ate, just sampled.

The short ferry ride on lake Ashi took us through the Kanagawa mountain range, which was quite a beautiful scenery. And you got a good look on the ropeway cable car taking you up on top of mount Hakone by the small shrine there. The view was quite spectacular here, with Mt Fuji on one side and the whole greater Tokyo and sea laid out before you on the other side.

We had planned the date according to the weather, so it was clear blue skies and sunny all day, which I find is something you have to aim for. With cloudy weather I think it would be less breathtaking.

Finally we got taken to the nearby train station where we rode the bullet train back to Tokyo station. A pleasant day, with some 5 hours of transportation, and the rest amidst beautiful Japanese nature. I can recommend it.

As a last remark our tour guide was an older Japanese man, who struggled quite a bit with his English. As with all Japanese people I've met he took his job seriously though, and made sure we all got where we needed to go, and tried his best to teach us a bit of history along the way. I think though he should stick to guiding the way, and not so much try to teach. :)

We were blessed to have a fine day and great viewing of Mt Fuji . Our guide Joe was just brilliant/ very friendly , personable, professional and helpful. The lunch was ordinary and we would prefer to have bought our own in hindsight. Joe gave a great talk about all the various parts of the set meal - which is great for those who haven’t been to Japan before . Joe stayed with the group taking the Shinkansen back to Tokyo and gave everyone very individual service as to how exactly to get themselves back to their hotels . I loved the mountainous areas we passed on our return to Odewara ( where we caught the Shinkansen) with all the Shinto shrines , temples and red Toru gates . A great day out !

Mr Sabe San was entertaining, knowleable even helped all of us on what transit lines to take going back to each hotels. I gave a 3 star cuz we were not able to do the rest of the tour due to weather condition BUT lucky for us we saw my Fuji without any clouds although inside our bus

The experiences included in this trip were great. We made it up to the 4th station and the weather was perfectly sunny. My only problem was with the timing. We had a small group and were always back on time or even early. We ended up missing the boat by a few minutes and waited around 40 minutes for the next one (we could have easily cut lunch 10-15 minutes short...we took an hour but the itinerary said 45 mins). Then we were all back to the bus early after the ropeway. The tour guide was shopping or something instead of checking on us, we missed the bullet train back by 5 mins and had to wait 30 mins for another one. Tour guides should know about the boat and train times and do their best to plan properly around them. It was very frustrating wasting 90 minutes of my day waiting around. Tour guide Harry was very nice but just needs to pay more attention to those things and this would’ve been a 5 star trip.

There was a typhoon in Japan the day we were suppose to arrive in Japan so all airlines were delayed by one or two days. We notified Viator of our problem and was told that was too bad and we lost all our money. I will never use them again!!!!!!!!!

Discover some of Japan’s most famous highlights on a full-day guided tour from Tokyo. Travel to Mt Fuji’s bustling 5th Station and learn about the revered mountain. Continue to nearby Lake Ashi for a short boat cruise, followed by a ride on the Mt Komagatake Ropeway. Climb by aerial tram to the top of Mt Komagatake and get fantastic views of the Owakudani volcanic valley, Lake Ashi and Mt Fuji. Return to Tokyo by bullet train in the evening. Enjoy the ease of included transportation, entry fees and a knowledgeable guide.

Half Day Geo Tour at Remote Volcanic Island in Tokyo