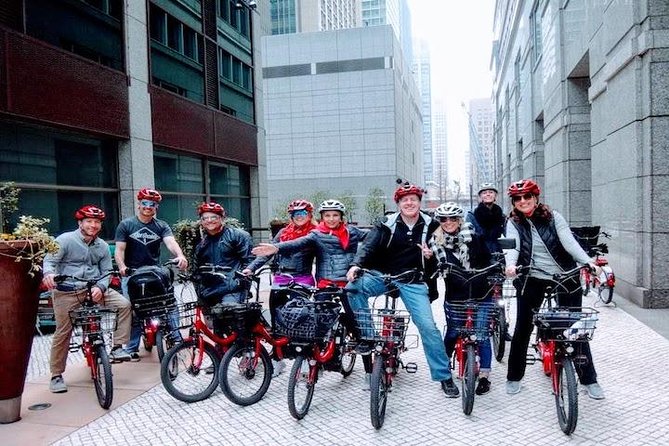 Take a pedal-powered trip through Tokyo aboard an electric-powered cycle on this 3-hour sightseeing tour by bike. Sample a mix of the Japanese capital’s historic and modern landmarks, visiting hotspots.

*You will only pass by the landmarks without entering the structure.

- Confirmation will be received at time of booking
- A minimum of 2 per booking
- A maximum of 6 people per booking
- Minimum age is 12 years
- Minimum height is 4.8 ft/in (145cm)
- All participants are expected to have basic cycling skills
- Not wheelchair accessible
- Near public transportation
- Not recommended for pregnant travelers
- No heart problems or other serious medical conditions
- Most travelers can participate
- This experience requires good weather. If it’s canceled due to poor weather, you’ll be offered a different date or a full refund
- This is a private tour/activity. Only your group will participate
- Face masks required for travelers in public areas
- Face masks required for guides in public areas
- Hand sanitizer available to travelers and staff
- Social distancing enforced throughout experience
- Regularly sanitized high-traffic areas
- Gear/equipment sanitized between use
- Transportation vehicles regularly sanitized
- Guides required to regularly wash hands
- Regular temperature checks for staff
- Temperature checks for travelers upon arrival
- Paid stay-at-home policy for staff with symptoms
- Contactless payments for gratuities and add-ons

Akihabara is known to be the centre of modern Japanese pop culture, and a major shopping district for video games, anime, manga, and electronics and computer-related goods. You might even bump into people in maid uniform handing out information for local maid cafés.

Asakusa is a popular spot for locals and visitors as well. It retains the vibe of the "old Tokyo" with a lot of traditional shops and street-food lining up on both sides of the streets.

Peddle through the Sumida River. You can make a brief stop and take some photos of the beautiful city. See Skytree, one of Tokyo's most symbolic landmarks, from the other side of the river.

Ryogoku is the center of sumo in Tokyo where the famous sumo stadium "Kokugikan" and sumo stables are located. Kokugikan seats over 10,000 visitors and hosts three sumo tournaments in January, May and September every year. During the tournament season, Ryogoku is filled with sumo fans lining up in front of Kokugikan.

Tokyo Station is Japan's busiest railway station with more than 4,000 trains arriving and departing, and over 500,000 people using it on a daily basis. You will see the most symbolic view of Tokyo Station - the Marunouchi side, famous for its prominent red brick building dated from 1914 and was recently reopened in its pre-war appearance.

Return to the departure point.

Ichi, our guide was really informative taking us to temples, on the roads, across bridges and through quaint authentic villages. Had a 10 yr old with us who managed to keep up too! Highly recommended.

Comfortable bikes that are easy to control. Our guide was knowledgeable, enjoyable and engaging.
A great way to get a quick glimpse of Tokyo. If I were to do it again, I would do a full day tour.

Take-san was an informative and humourous guide on our bike tour around Tokyo. This is a great value which we recommend and gave us insight into traditional and modern Tokyo. Take- San took a number of photos and also sent us a lot of helpful info for other points of interest.Thank you!!

WOW how to see Tokyo and feel involved! The transition of the Emporer to his son took place the day we did the tour. First it was a little unclear where to meet but with the help of some Tokyo citizens we managed to get to the right place to start our trip. There was a lovely Italian restaurant just nest to the spot so because we went early we were able to eat lunch right outside beside where we left for the trip.
(La Mermma). Our tour guide was Hideki "MORI" and was he great! Knowledgable (like a seasoned professor), patient, FUN, calm, a lovely person! Gave a very warm feeling for Japanese residents. Took us even down a beautiful alley with a private small neighborhood temple! explained about various neighborhoods! so knowledgable! love that behind the scene stuff! what a beautiful clean city!! so gorgeous and quaint I filmed a video of it! Saw more military and police than I have seen in my life!! so exciting! I felt so safe. Even riding in urban area with so much traffic was NOT threatened (and I am trauma surgeon)!! Such a small group we really got to know other riders! (six guests including us!!)
Mori even took us to a shrine where they were playing drums and flutes for a festival! That was unexpected!
Note: my husband and I are nearly 70 and we did not feel out of place or crazy for doing this (but we can ride bikes!) it was three hours (about 5 miles) but the best three hours we spent in Japan. If I come back I will certainly contact Mori for some more interactive touring in Tokyo. I feel like I have a Japanese friend!! what a day!!

We enjoyed this electric bike tour very much. It was well suited for adults and our 13 year old. Our guide took us to neighborhoods around Tokyo we never would have seen otherwise. He was also flexible with where we went and customized our tour a little to accommodate a request from the group. The bikes have electric power to support pedaling and you hardly have to work at all if you don’t want to. We enjoyed our afternoon very much! A great way to see Tokyo, and get some fresh air and exercise at the same time.

Yoshi, our tour guide, was excellent. He taught us a lot about the history of Japan and its emperors and shoguns, and he showed us a great overview of Tokyo. Because we had electric bikes, he was able to take us to places not accessible with buses or cars. We recommend the electric bike tour and would do it again to see other places.

My 17 year old son and I had a great time on the electric bike tour. Guide was upbeat and interesting. Tons of foot traffic because of cherry blossom season but after a couple of stretches where we had to walk our bikes things opened up and we got to see so many parts of the city we just would not have explored on foot. Great tour!

Guide is very knowledgeable and informative. He also takes lots of pictures of you that he then emails to you after

Excellent way to move around and see plenty with a guide leading the way. A little expensive but we are pleased we did it all the same.

Warning to fellow travelers, do not book this tour. It is a scam. I arrived 20 minutes early to the designated location and the location instructions were incorrect. I called the contact number provided and the person I spoke to was unwilling to assist me even though I provided my exact location via a maps pin drop.

After calling back several times over a 30 minute period trying to help we had no choice but to turn back. I reached out to Viator for a refund and they were unable to provide one. Again, this is a scam, do not book.

Take a pedal-powered trip through Tokyo aboard an electric-powered cycle on this 3-hour sightseeing tour by bike. Sample a mix of the Japanese capital’s historic and modern landmarks, visiting hotspots.

*You will only pass by the landmarks without entering the structure.

Special Access at Toyosu Fish Market with Hotel Pick Up