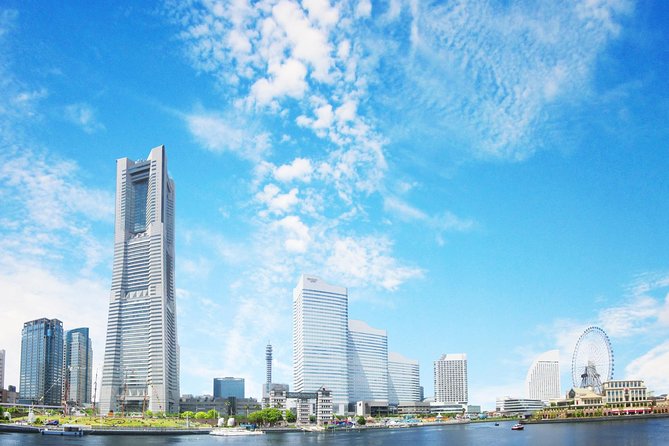 Kick off your Japan vacation in style with arrival private taxi type transfers from Tokyo to Yokohama. Your driver will pick you up from Tokyo Hotels and drive you directly to Yokohama Port or your Yokohama city hotel by a comfortable vehicle with taxi type. Travel one-way in style in a private taxi type sedan or mpv/van with up to 8 people in your group (depending on option selected), and skip the stress of finding a taxi or shuttle. These private transfers are available from 24 hours a day, seven days a week.

- Confirmation will be received at time of booking
- Not wheelchair accessible
- Hotels with telephone no. start with '03' (eg: 03-xxx-xxxx) and '045' (eg: 045-xxx-xxxx)
- Baggage:
- 1-2 passengers: 2 baggage or less
- 3-4 passengers: 4 baggage or less
- 5-8 passengers: 8 baggage or less
- Baggage: One Big Suite Case & One Hand Carry per Passengers. Additional baggage :Please check with us and indicate under "Special Requirement"
- Itinerary Frequently Asked Questions:
- 1. How can I locate Cherry Tomato’s driver and vehicle
- You need to go to the “Meeting Point” which indicated in your reservation confirmation or service voucher. Driver will hold ‘Cherry Tomato’ Sign Board to meet and greet you.
- 2. What should I do if my flight or train is delayed
- For airport, seaport and train-station pick-ups, we indicate ‘maximum waiting time’ in our service voucher, if you are not able to be picked up on time, Please contact our service center. We understand that there may be issues beyond your control which could lead to unexpected delays. Therefore, by providing your flight, train, or cruise details upon booking, our staff is able to track your actual arrival time and will adjust your pick-up time accordingly.
- 3. Where are your pick up and drop off points
- We provide a Door-to-Door service. We will pick you up from the Airport terminal you arrived and take you to the address where you want to go to.
- On departure we will pick you up from your address and drop you off at the terminal from which your flight leaves. (Noted that all flight details and address info are based on the booking form which you filled in.
- 4. Where will you wait for me at my hotel/apartment/home
- If you are going to your destination from a hotel, normally please wait at the hotel lobby. (you will receive departure notice one day before service day, around 5 PM). If being collected from an apartment or your home, please wait outside by your main door. If apartment or home unable to reach due to narrow streets and our vehicle size, will decide meeting point nearby.
- 5. What if I get to the airport too late and miss my flight
- We normally set your pick-up time to get you to the airport 2 hours or more before your flight.
- 6. How far in advance do I have to make my reservation
- We accept bookings 13months in advance, for last minute travelers, we recommend you book at least 72 hours in advance to ensure that we have enough time to process your request. However, we will do our best to accommodate last minute requests even before your flight take off. Take note booking is subject to availability and confirmation.
- 7. Can passenger travel with a wheelchair
- It can be arranged only if we were informed. You must inform us in advance if there are passenger needs wheelchair or travel with a wheelchair. A rental wheelchair for mobility also can be arranged in advance.
- Near public transportation
- Infants must sit on laps
- Most travelers can participate
- This is a private tour/activity. Only your group will participate

This is the way to do it: get peace of mind at the start of your Cruise vacation by booking this easy and hassle-free shared transfer from your hotel in central Tokyo with telephone number start with '03' (eg: 03-xxx-xxxx) to the cruise ship port at Yokohama Osanbashi Pier or Yokohama Hotels with telephone number start with '045' (eg: 045-xxx-xxxx)  in a timely manner. A private service provides you traveling exclusively with your group which is available to coincide with your cruise's departure schedule.

This private door-to-door transfer is a hassle-free way to get from your Tokyo hotel to Yokohama Port or hotels. It is a simple, cost-effective option that is available 24 hours a day, seven days a week — so it doesn’t matter when your ship departs. Enter your details when you book and pay in advance to have your transfer confirmed instantly. When your ride arrives at your pre-determined pick-up location, simply show your voucher to your driver.

You need to go to the “Meeting Point” which is indicated in your reservation confirmation or service voucher. Your driver will hold a ‘Cherry Tomato’ Sign Board to meet and greet you.

As you drive along Tokyo to Yokohama, admire the sights and views of the city, even perhaps picking out areas you look forward to exploring later into your vacation.

Distinctive and dependable for on-time pick – up and deliveries. Our gracious professional drivers will get you to your desired destination as quickly and safely as possible. But we cannot guarantee an English-speaking driver.

Our Cherry Tomato customer support representative is always happy to assist you with all your questions or services concern about your trip in Japan.For emergency assistance during your Japan visit, you can contact our Emergency Assistance Team 24/7.

Additional baggage: Please check with us and indicate under "Special Requirement"

1) full name and age for all guest

We only accept pick up location from Tokyo City area with telephone number start with '03' (eg: 03-xxx-xxxx).

great transfer from our hotel in Tokyo to the port.... on time and courteous !! door to door and helpful driver

The process of booking was easy and all questions and communications were promptly answered. Time confirmation was delivered to my hotel via fax the evening before.
The driver arrived on time and delivered us to the pier promptly.

Driver was right on time, was very helpful and cordial. Thank you for such great service! We will definitely use Viator again

This booking went smoothly from start to finish. The driver arrived on time and was friendly and helpful. We highly recommend this.

Review—0!!! How can I review when I never had the service!!! I was on a ship—Holland America Westerdam—that had to divert because of the recent super typhoon making us a day late to Yokohama. I sent an email saying I would need the ride at the same time a day later—tried calling but the Viator number given was not in service. Further, I received an email saying that no changes could be made after purchase. So I am out $205!!! Under the circumstances—a super typhoon prevented the ship from getting to the port as originally scheduled. I would appreciate a refund. Thank you.

Kick off your Japan vacation in style with arrival private taxi type transfers from Tokyo to Yokohama. Your driver will pick you up from Tokyo Hotels and drive you directly to Yokohama Port or your Yokohama city hotel by a comfortable vehicle with taxi type. Travel one-way in style in a private taxi type sedan or mpv/van with up to 8 people in your group (depending on option selected), and skip the stress of finding a taxi or shuttle. These private transfers are available from 24 hours a day, seven days a week.

Must see Tokyo with a local: private & personalized