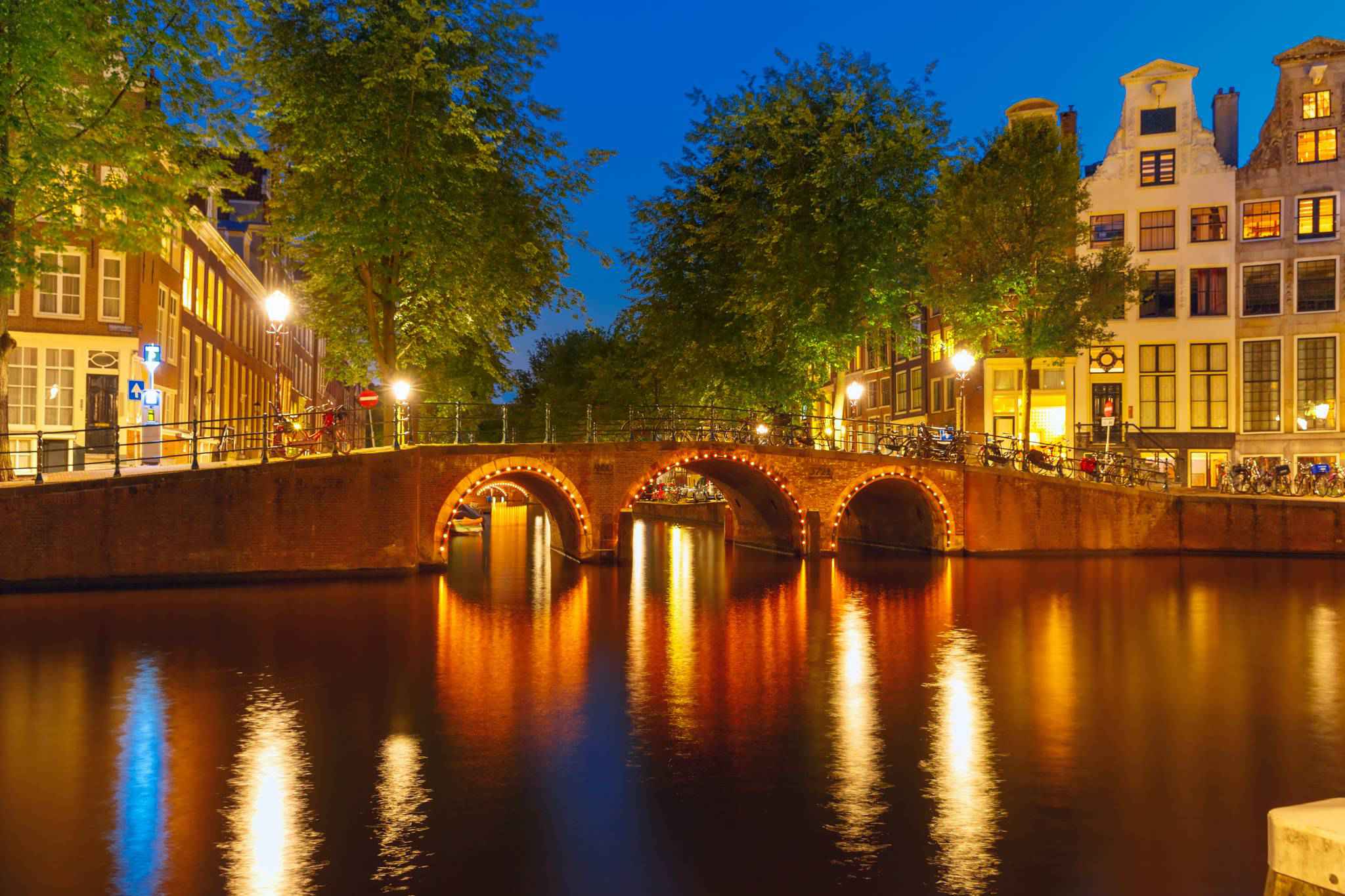 Amsterdam, capital of the Netherlands, has more than one hundred kilometers of canals, about 90 islands and 1,500 bridges. The three main canals, Herengracht, Prinsengracht, and Keizersgracht, dug in the 17th century during the Dutch Golden Age, form concentric belts around the city, known as the Grachtengordel. Alongside the main canals are 1550 monumental buildings. The 17th-century canal ring area, including the Prinsengracht, Keizersgracht, Herengracht and Jordaan, were placed on the UNESCO World Heritage List in 2010, contributing to Amsterdam's fame as the "Venice of the North".

Notable canals in the Canal Belt

Inward to outward, the canals are as follows:
Singel
Singel encircled the medieval city of Amsterdam. It served as a moat around the city from 1480 until 1585, when Amsterdam expanded beyond Singel. The canal runs from the IJ Bay, near Central Station, to the Muntplein square, where it meets the Amstel river. It is now the inner-most canal in Amsterdam's semicircular ring of canals. The canal should not be confused with Singelgracht canal, which became the outer limit of the city during the Dutch Golden Age in the 17th Century.

Herengracht
Herengracht (Patricians' Canal or Lords' Canal) is the first of the three major canals in the city centre of Amsterdam. The canal is named after the heren regeerders who governed the city in the 16th and 17th century. The most fashionable part is called the Golden Bend, with many double wide mansions, inner gardens and coach houses on Keizersgracht.Samuel Sarphati (1813-1868) lived at the house at number 598 and Peter the Great stayed at the house at number 527 during his second visit to Amsterdam.

Keizersgracht
Keizersgracht (literal English translation: Emperor's Canal) is the second and widest of the three major canals in the city centre of Amsterdam, in between Herengracht and Prinsengracht. It is named after Maximilian I, Holy Roman Emperor.John Adams stayed at the house at number 529, Heinrich Schliemann worked for almost three years at number 71, Daniel Fahrenheit at 463-465, and during his first visit to Amsterdam (1693), Peter the Great stayed at the house at number 317.
The Homomonument (Gay Monument) faces the Keizersgracht.

Prinsengracht
Prinsengracht (Prince's Canal) is the fourth and the longest of the main canals in Amsterdam. It is named after the Prince of Orange. Most of the canal houses along it were built during the Dutch Golden Age of the United Provinces. The bridges over the Prinsengracht canal connect with the streets in the Jordaan.

Annually, the Prinsengrachtconcert is held on a pontoon in the canal in front of Hotel Pulitzer.

Other notable canals
Zwanenburgwal
Zwanenburgwal is a canal and street in the center of Amsterdam. The painter Rembrandt and philosopher Spinoza lived here. In 2006 it was voted one of the most beautiful streets in Amsterdam by readers of Het Parool, a local daily newspaper.

Zwanenburgwal flows from Sint Antoniessluis sluice gate (between the streets Sint Antoniesbreestraat and Jodenbreestraat) to the Amstel river. The canal was originally named Verversgracht ("dyers' canal"), after the textile industry that once dominated this part of town. Dyed textiles were hung to dry along the canal.

Brouwersgracht
Brouwersgracht is a canal in the city centre of Amsterdam and is part of the canal belt connecting the Singel, Herengracht, Keizergracht and Prinsengracht and marks the northern border of the canal belt. The canal served as a site for ships returning from Asia with spices and silks, therefore Brouwersgracht had many warehouses and storage depots for the ships inventories. Likewise some officials of the Dutch East India Company lived here such as their cartographer (1708-1743) Isaak de Graaf. Breweries were also prevalent in the area due to the access to fresh water shipments. Today the warehouses are now apartments, some of the most expensive in Amsterdam. Houseboats also are seen in the canal. In 2007, Brouwersgracht was voted the most beautiful street in Amsterdam by readers of Het Parool, a local daily newspaper.

Kloveniersburgwal
Kloveniersburgwal is a canal running south from Nieuwmarkt to the Amstel River on the edge of the medieval city. The east side became populated in the 17th century and has a few grand mansions, like the Trippenhuis, now housing the Royal Netherlands Academy of Arts and Sciences (KNAW). Kloveniersburgwal was popular with administrators at the Dutch East India Company, being close to its nerve center on Oude Hoogstraat and its warehouse.

Brantasgracht, Lamonggracht, Majanggracht and Seranggracht
These four canals are the newest in Amsterdam, constructed on Java Island in 1995, a manmade island in the IJ Harbor, north-east of the City Center. The canals are lined with modern interpretations of classic Amsterdam canal houses, which were designed by 19 young Dutch architects. Each house is 4.5 meters wide and 4 or 5 stories tall, but the designs are totally unique and are often featured in Amsterdam travel guides despite being off the beaten path of most tourists. Nine ornate metal bridges, designed by artist couple Guy Rombouts and Monika Droste, cross the canals for pedestrians and cyclists. 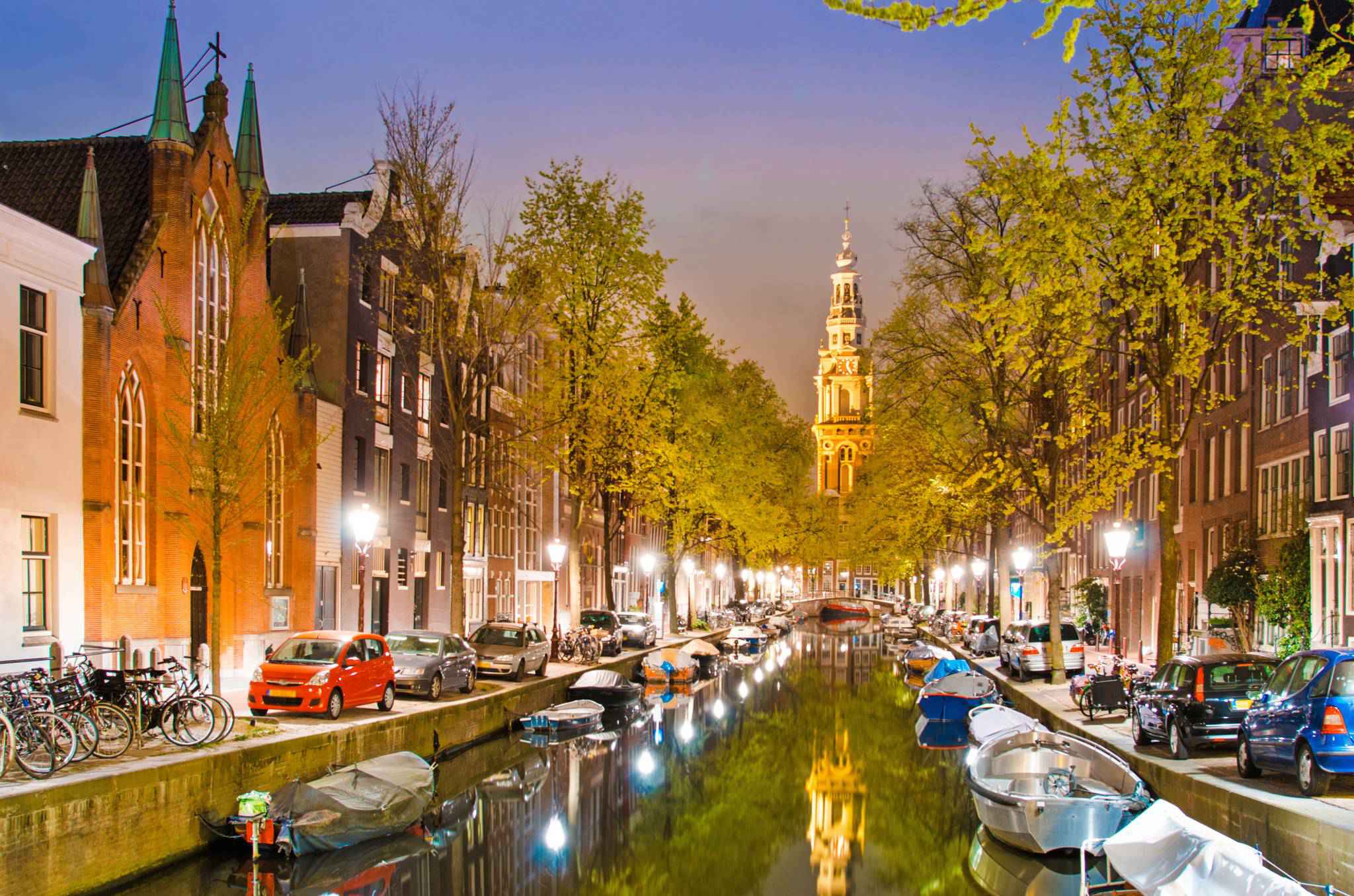