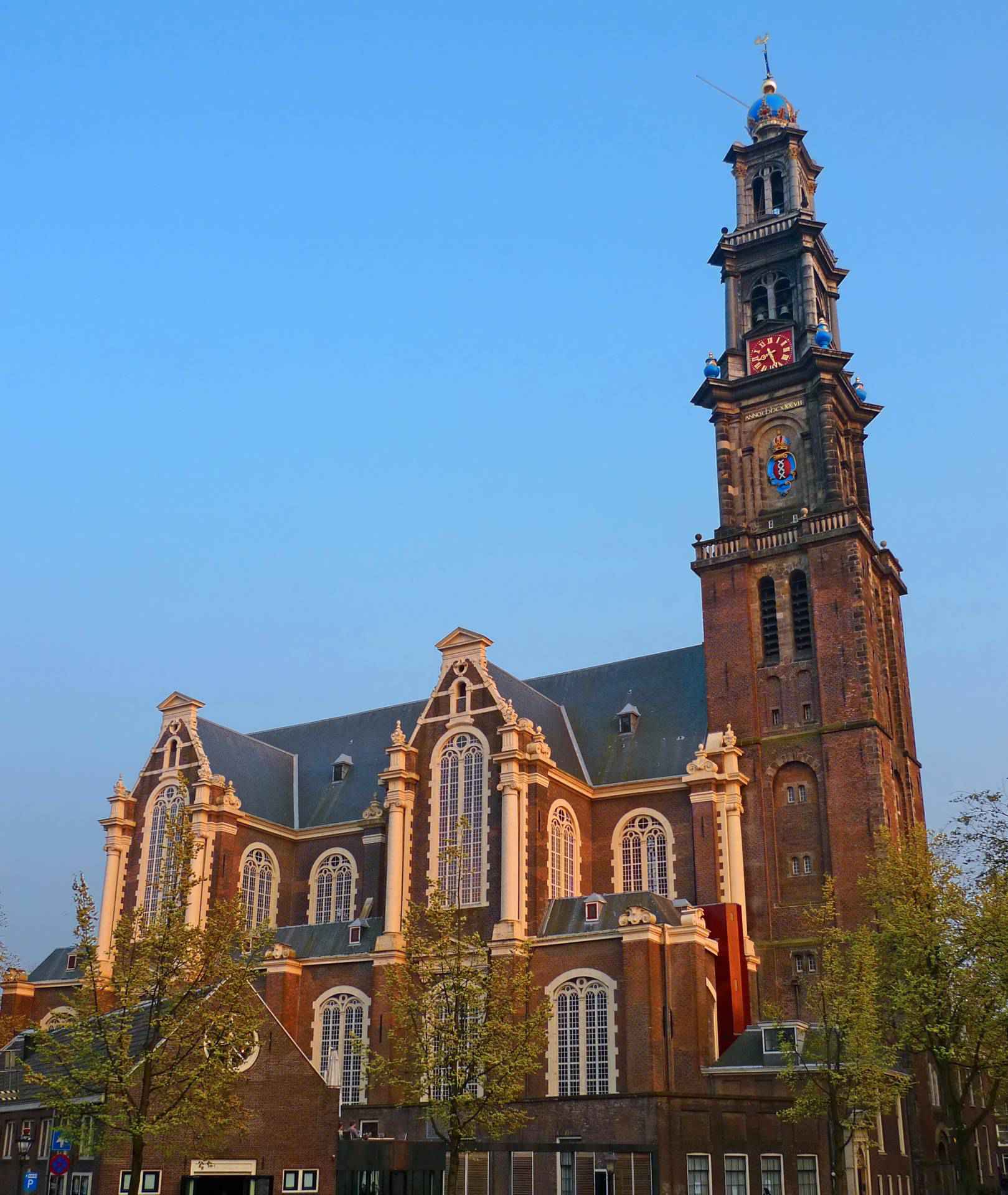 Westerkerk is a Reformed church within Dutch Protestant church in central Amsterdam in the Netherlands. It is next to Amsterdam's Jordaan district, on the bank of the Prinsengracht canal.

Main Duyschot organ
There was no organ when the Westerkerk was consecrated on Whit Sunday the 8th of June in 1631. According to Calvinism, playing instrumental music inside the church was still considered 'profane' in those days. It took many years of consultation until an organ was finally allowed. At first there was still talk of moving the small organ (koororgel) used in the Nieuwe- or the 'Oudekerk' but the pipes of this 'Oudekerk' choir organ were finally moved to the 'Zuiderkerk'. In 1681 the Westerkerk decided on commissioning organ builder Roelof Barentszn Duyschot for the construction of a new organ. Before it was finished he died and in 1686 the new organ was finished by his son Johannes Duyschot. Later in 1727 it was enlarged with an extra third keyboard by Christiaan Vater who learned his profession at Arp Schnitger.

Many alterations were done on the organ in the course of time. In the 19th century in 1895 even a rebuild of the inside of the organ took place by Daniel Gerard Steenkuyl. Lucky enough many of the old pipes and the wind chests were re used. In 1939, the keyboard was equipped with electric tracker action and even a swell work was added. It was not what this organ was intended to be in sound and action. The organ was almost doubled in size, but was also too big for its case.

So between 1989 and 1992 the organ was reconstructed by Flentrop organ builders in Zaandam to its former mechanical action again more or less like Christiaan Vater made it in 1727. Today the 'bovenwerk' (Oberwerk, located in the top of the organ case) is still almost complete with stops by Vater. An exception is the 'baarpyp', which is made by Steenkuyl in 1896 and the 'Dulciaan' which is made by Flentrop in 1992. The front pipes were made in 1842 by Hermanus Knipscheer. In the situation after 1992, less than half of the pipes are historic and re-used in the 'hoofdwerk' (Great organ) and the 'Rugwerk' (Chaire organ). The keyboards and stop triggers beside it of this just mechanical baroque organ are located in the main case behind this 'rugwerk'. For this kind of baroque organs, it is characteristic that many of the stops, mainly the principals, are doubled in the trebles. This was set up to create more power in leading the congregation in their psalm singing. For complex organ works one or even two stop assistants are necessary for triggering these stops.

In the summer season from April till the end of October there is a weekly free lunchtime concert on Friday at 1pm. In August there is a free concert almost every day for a week 'Geen dag zonder Bach' ('Not a day without Bach') and the 'Grachten' (Canal) festival. A noncommittal money collection is held after the concert at the exit. The money is used for the costs of the maintenance of the concerts and the organs. Music by Johann Sebastian Bach (1685-1750) is performed almost weekly in the divine Sunday services. Bach was born in 1685, that is a year before the organ was finished but as far as we know, he never visited Amsterdam. His music sounds like it was made for this baroque instrument. See the site of Westerkerk for the Lunchtime concert schedule.
Organist/choirmaster (for the Cappella) in the Westerkerk is Jos van der Kooy.

Bells in the 'Westertoren'
Just above the clock-faces is the carillon. The largest 14 of the 51 bells in this carillon were cast by François Hemony in 1658. The modern bells were cast in 1959 by Eijsbouts replacing the by pollution damaged bells. In 1991 three bells more were added by the same foundery. The not in use smaller Hemony bells can be seen in the tower together with the original baton keyboard from the 17th century. The carillon was enlarged to 4 octaves and is tuned in Meantone temperament. It is the only carillon in the city chiming the entire twenty-four hours over Amsterdam. (On request of the 'Jordaan' people) The drum to do this, was made by Jurriaen Spraeckel from Zutphen in 1659 and it still chimes every quarter of the hour to announce the hour and half hour strike. On the quarter of the hour a short tune is performed. The two strike bells were made by Assuerus (Ahasverus) Koster in 1636. The hour strike bell (F0) is the largest in Amsterdam (7509 kg) and is hung in the room for the carillon. The text on this Bourdon bell is: 'VERBUM DOMINI MANET IN ETERNUM - ASSUERUS KOSTER ME FECIT AMSTELDAMI 1636' The smaller bell (A1) for half hour is hung in top of the spire just under the crown. Weekly on Tuesday at noon the city carilloneur gives his recital on the carillon for an hour. He is also responsible for the tunes on the drum and changes these twice a year. At this moment (2015) Boudewijn Zwart is the City Carilloneur.

In a lower chamber behind the sounding boards in the tower wall
there are three swinging bells also made by François Hemony in 1658. The largest swinging bell was replaced after 27 years by Claude Fremy (his pupil, nephew and successor), because it was cracked. The bells (a major triad) are rung to announce the divine service on Sunday and also when the service is on, during praying the 'Our Father'. This bell by Fremy is also connected with the pedals in the baton keyboard of the carillon. The latest renovation works on the carillon were in 2006 when the tower was also renovated. In that year the crown on top was also painted in its original blue color. 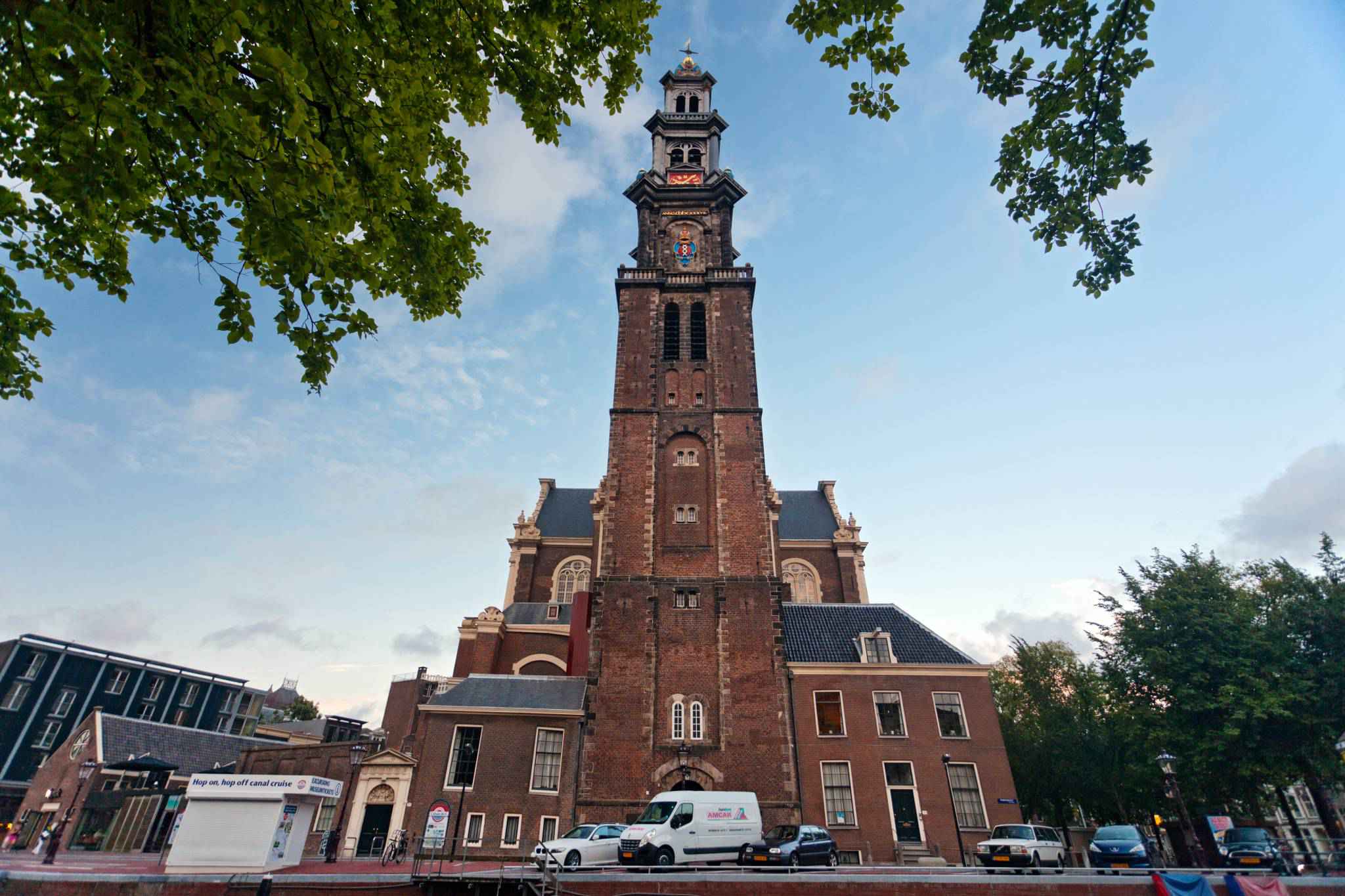