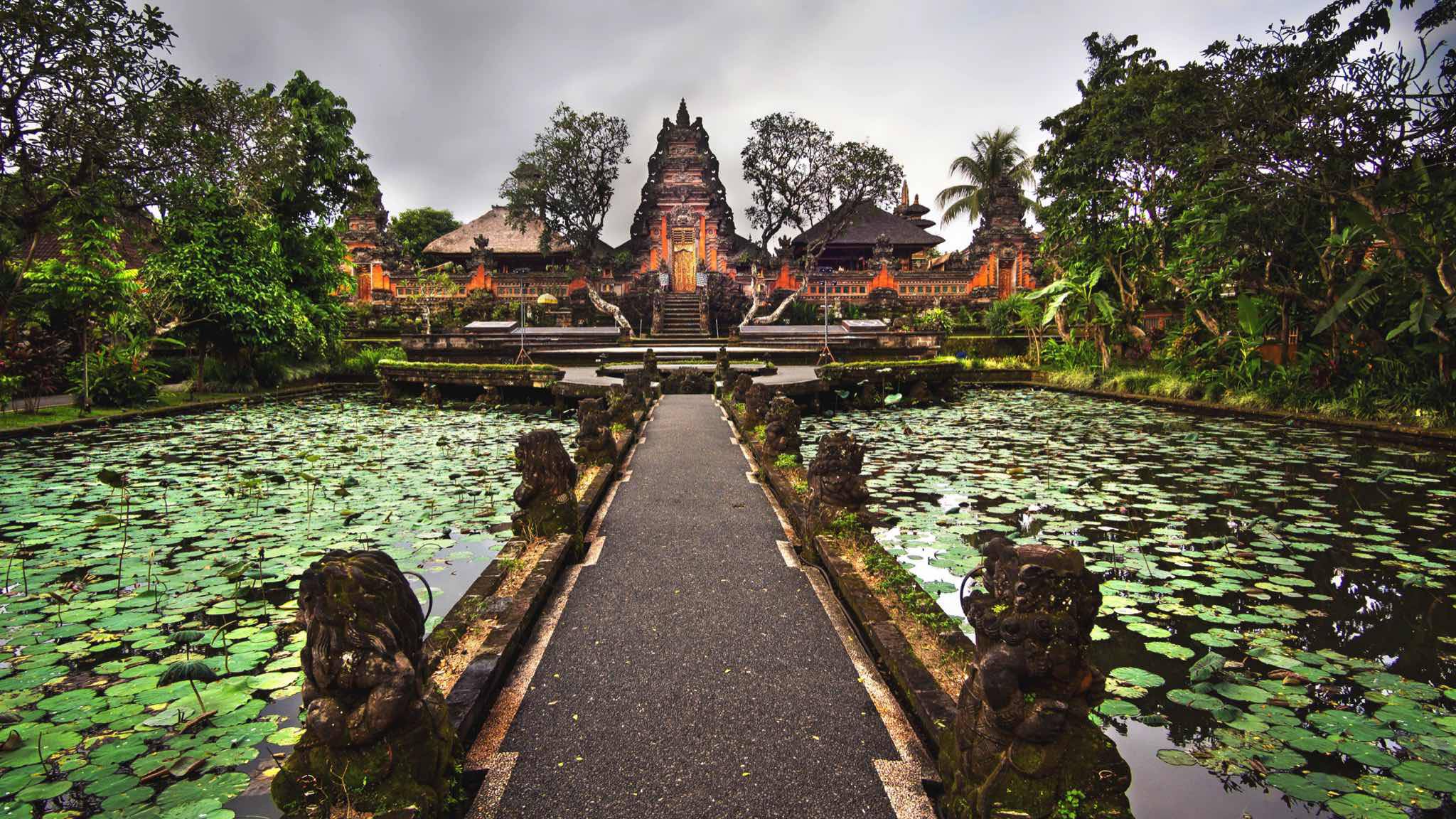 Ubud is a town on the Indonesian island of Bali in Ubud District, located amongst rice paddies and steep ravines in the central foothills of the Gianyar regency. One of Bali's major arts and culture centres, it has developed a large tourism industry.

Ubud has a population of about 30,000 people. Recently, it has become difficult to distinguish the town itself from the villages that surround it. The area surrounding the town is made up of small farms, rice paddies, and dense forest.

Buildings
Puri Saren Agung is a large palace located at the intersection of Monkey Forest and Raya Ubud roads. The residence of Tjokorda Gede Agung Sukawati (1910–1978), the last ruling monarch of Ubud, it is still owned by the royal family. Dance performances and ceremonies are held in its courtyard. The palace was also one of Ubud's first hotels, opening its doors back in the 1930s.

A number of Hindu temples exist, such as Pura Desa Ubud, which is the main temple, Pura Taman Saraswati, and Pura Dalem Agung Padangtegal, the temple of death. The Gunung Kawi temple is the site of the royal tombs. Goa Gajah, also known as the Elephant Cave, is located in a steep valley just outside Ubud near the town of Bedulu.
The Moon of Pejeng, in nearby Pejeng, is the largest single-cast bronze kettle drum in the world, dating from circa 300BC. It is a popular destination for tourists interested in local culture.

Culture
The town and area has a number of art museums, such as the Blanco Renaissance Museum, the Puri Lukisan Museum, Neka Art Museum, and the Agung Rai Museum of Art. Close-by is the Museum Rudana in Peliatan.

The Tek Tok is a traditional Balinese dance that is accompanied by musical sound of mouth 'Tek Tok' altogether with various combinations of body movement and other sounds. Tek Tok dance tale taken from the Mahabharata, where Draupadi at stake in a gambling.

The war between righteousness and villainy become part of the philosophy of life which has never dimmed. The story "Draupadi Parwa" Tek Tok Dance gives a moral message which when a woman who embodies the values of patience, sacrifice, compassion, devotion, and a holy sincerity is not respected, then disasters and calamities will befall a kingdom or state. This story also gives the message that truth, virtue, devotion and genuine compassion will always be protected by God. Tek Tok Dance performance held regularly in Bali Culture Center (BCC) Ubud, Bali four times a week.

Nature
The Ubud Monkey Forest is a sacred nature reserve located near the southern end of Jalan Monkey Forest. It houses the temple of death, and approximately 340 crab-eating macaque (Macaca fascicularis) monkeys live there.

The Campuhan ridge walk is a hill from where one can see two rivers Tukad Yeh Wos Kiwa and Tukad Yeh Wos Tengen merge. There are one meter wide of paving block track about two kilometers to the top of the hill. 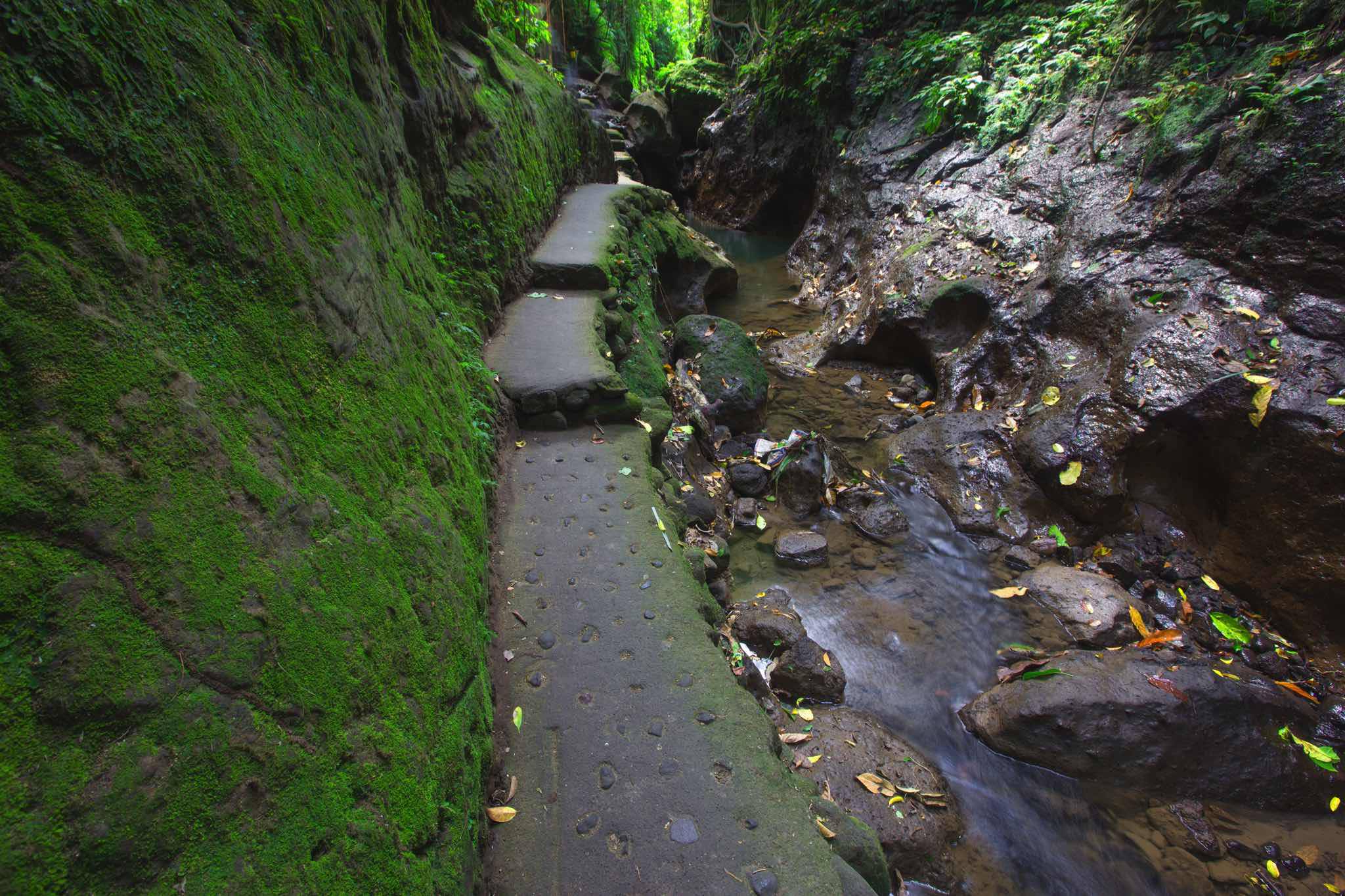