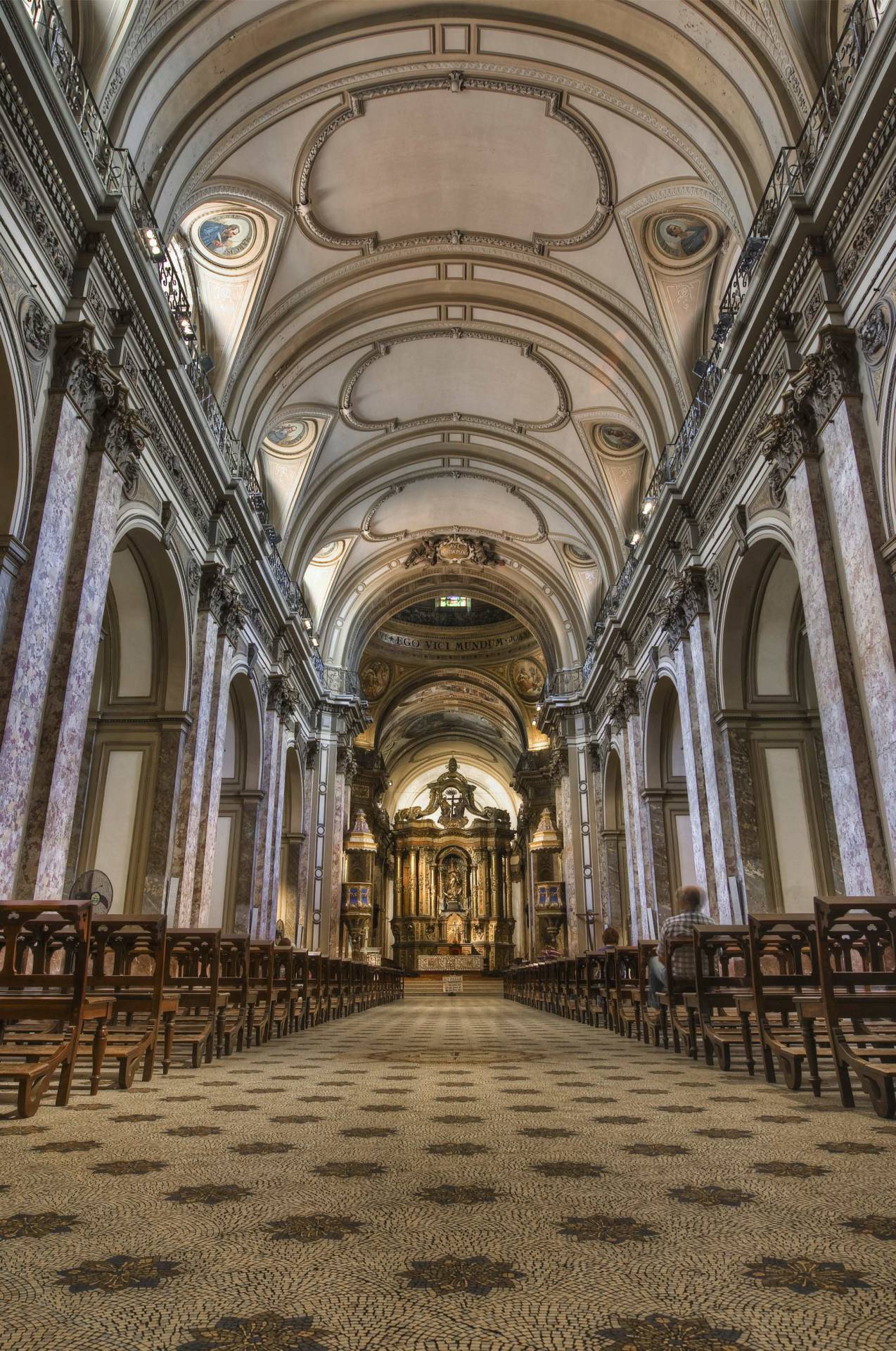 
The Buenos Aires Metropolitan Cathedral (Spanish: Catedral Metropolitana de Buenos Aires) is the main Catholic church in Buenos Aires, Argentina. It is located in the city centre, overlooking Plaza de Mayo, on the corner of San Martín and Rivadavia streets, in the San Nicolás neighbourhood. It is the mother church of the Archdiocese of Buenos Aires.

The Cathedral of Buenos Aires was rebuilt several times since its humble origins in the 16th century. The present building is a mix of architectural styles, with a 18th century nave and dome and a severe, 19th century Neoclassical façade without towers. The interior keeps precious 18th century statues and altarpieces, as well as abundant Neo-Renaissance and Neo-Baroque decoration.

On the night of May 23 1752, the nave of the cathedral collapsed. The only portions still standing were the façade and towers, but the rest of the building needed to be completely rebuilt once again. Italian architect Antonio Masella was put in charge of the project, and the works began already in 1753. Masella designed a majestic church, much larger than the previous structure, with a three-aisled nave covered with barrel vaulting and lateral chapels. A dome was to sit over the crossing. Upon completion of the dome, however, fissures in the structure were detected and it had to be rebuilt. Masella was removed from the project and prosecuted by the authorities, although later acquitted.

The dome was rebuilt by Portuguese architect Manuel Álvarez de Rocha after 1770. The façade by Blanqui and the towers were finally demolished in 1778, since they were too small in comparison to the scale of the new cathedral. An elegant project for a new façade with two flanking towers, combining Rococo and Neoclassical elements, was presented by the Portuguese military engineer José Custódio de Sá e Faria, but financial constraints prevented the realisation of the project. The cathedral was consecrated in 1791 without façade.

Construction of a façade began in the early 1800s directed by Spanish architect Tomás Toribio, but the project did not advance much. It was only in 1821, under Governor Martín Rodríguez and his Minister Bernardino Rivadavia, that plans to complete the cathedral were taken seriously. Starting in 1826, French architects Prosper Catelin and Pierre Benoit built a new Neoclassical façade for the cathedral inspired by the Palais Bourbon in Paris. Construction was temporarily halted in 1827, and when it resumed, progress was slow until its final completion. The façade of the building consists of a tall portico, inspired by Classical architecture, with twelve columns and a triangular pediment on top. The portico lends the building the appearance of an ancient temple rather than a Catholic church. The original project did not call for towers to be built and, even though there were later plans to build two towers, they were never materialised.

The decoration of the facade was only finished between 1860 and 1863, when French sculptor Joseph Dubourdieu created the reliefs of the pediment. The scene represents the reunion of Joseph with his brothers and father Jacob in Egypt, and was intended as an allegory of the unity of the Argentine nation after several fraticide wars. Dubourdieu also completed the Corinthian capitals of the columns of the portico.

Interior
The Cathedral of Buenos Aires is a Latin cross building with transept and three-aisles with side chapels connected by corridors. Originally the interior was only decorated with altarpieces, but at the end of the 19th century the walls and ceilings of the church were decorated with frescoes depicting biblical scenes painted the Italian Francesco Paolo Parisi. In 1907, the floor of the catedral was covered with Venetian-style mosaics designed by the Italian Carlo Morra.

The cathedral still has some elements dating from colonial times. The most important is the main gilt wood altarpiece in Rococo style, dating from 1785 and executed by Spanish sculptor Isidro Lorea. The altarpiece occupies the main chapel and has a statue of the Virgin Mary and a representation of the Holy Trinity in its canopy.
Another notable colonial sculpture is the Christ of Buenos Aires, a large image of the crucified Christ located in the altarpiece of the lateral arm of the transept. The statue was carved by Portuguese sculptor Manuel do Coyto in 1671 and is the oldest in the cathedral. According to the faithful, it has miraculously saved the city from a flood in the 18th century.

The two pulpits of the catedral, in transitional Rococo-Neoclassical style, were created in 1789-1790 by the Spanish sculptor Juan Antonio Gaspar Hernández, who would later (1799) direct the first art school of Buenos Aires.

Mausoleum of General San Martín
In 1880, the remains of General José de San Martín were brought from France and placed in a mausoleum, reachable from the right aisle of the church. The mausoleum was specially designed by French sculptor Albert Carrier-Belleuse, with marble of various colours. The black sarcophagh is guarded by three life-size female figures that represent Argentina, Chile and Peru, three of the regions freed by the General. The mausoleum also has the remains of Generals Juan Gregorio de las Heras and Tomás Guido, as well as those of the Unknown Soldier of the Independence. 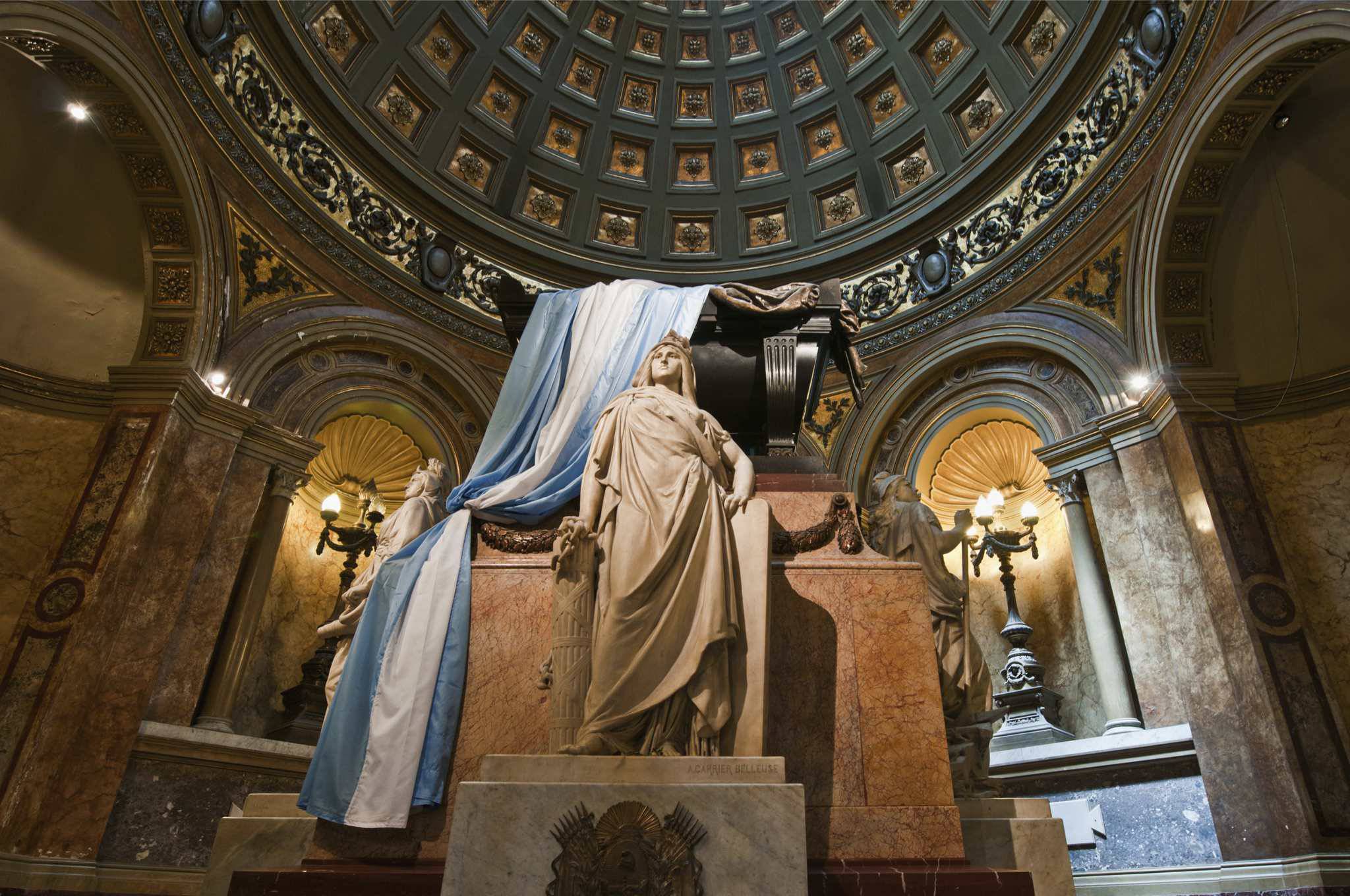