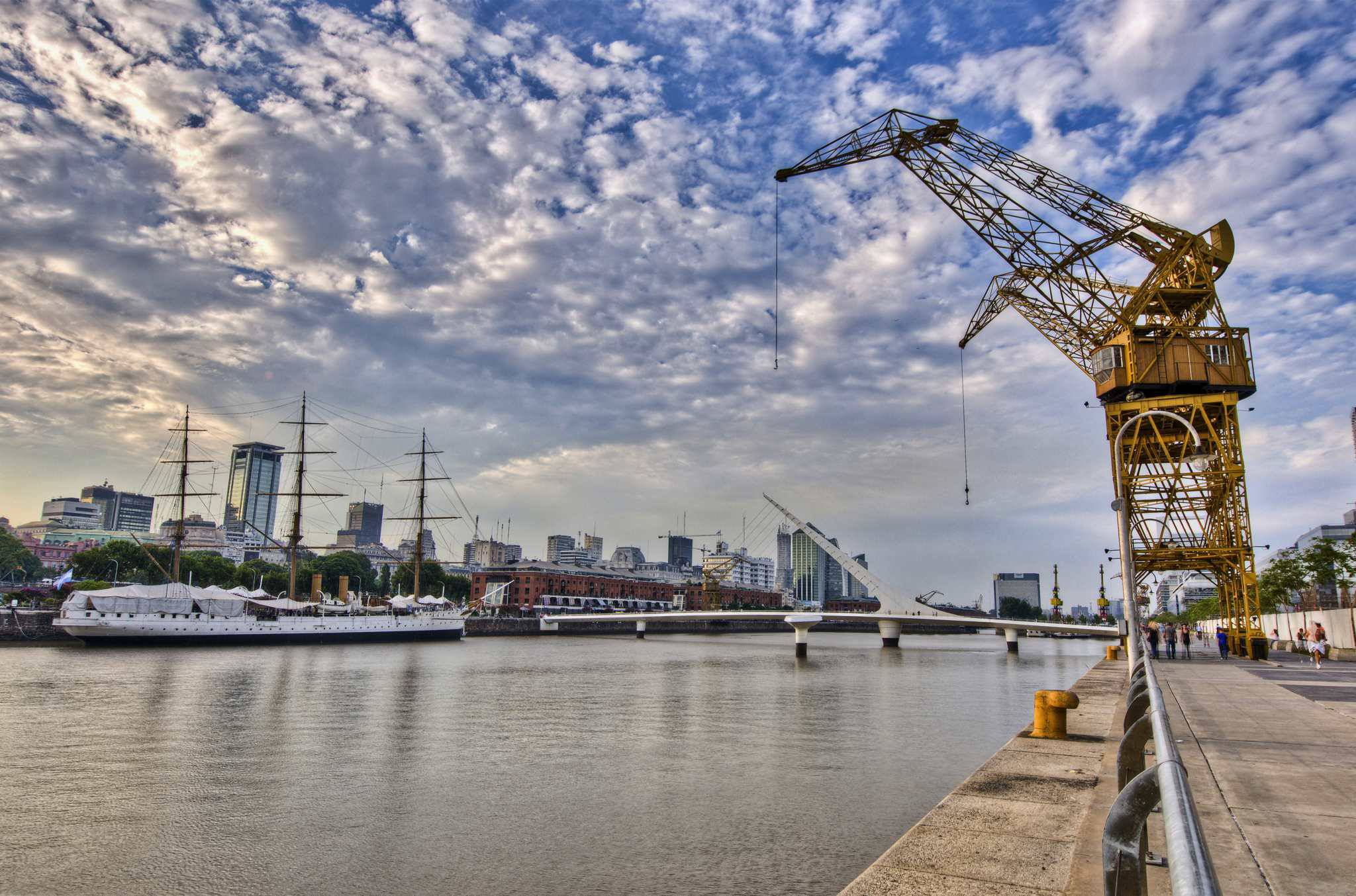 
Puerto Madero, also known within the urban planning community as the Puerto Madero Waterfront, is a district of the Argentine capital at Buenos Aires CBD, occupying a significant portion of the Río de la Plata riverbank and representing the latest architectural trends in the city of Buenos Aires.

From its inception, the city of Buenos Aires had a problem accommodating large cargo ships. The shallow river did not allow for direct docking, so ships remained far from the shore and unloaded passengers and merchandise onto barges and ferries for transport to the pier.

In 1882 the national government contracted local businessman Eduardo Madero to be in charge of the construction of a new port which would solve these disadvantages. Madero's project, designed by British engineer Sir John Hawkshaw, was chosen from among numerous others.

Construction began in 1887 and was completed in 1897, although the installed fittings had been partially operative since some years before. Important amounts of money were spent in this construction and it was an engineering landmark of the time. Ten years after completion, however, the appearance of larger cargo ships made Puerto Madero obsolete.

The government had to then face the construction of a new port, this time contracting engineer Luis Huergo, whose plans for a port of staggered docks which would open directly to the river was among those rejected in the 1880s. His plans resulted in the "Puerto Nuevo" (New Port), still perfectly operative after its first segment opened in 1911.

In the 1990s, local and foreign investment led to a massive regeneration effort, recycling and refurbishing the west side warehouses into elegant houses, offices, lofts, private universities, luxurious hotels and restaurants that conform to a gallery of options for this new district in a city that grew up turning its back to the river. Led by the 1999 opening of the Buenos Aires Hilton, luxurious hotels, state-of-the-art multiplex cinemas, theatres, cultural centres, and office and corporate buildings are located mostly in the east side
Puerto Madero has been redeveloped with international flair, drawing interest from renown architects such as Santiago Calatrava, Norman Foster, César Pelli and Phillippe Starck, among others. Today one of the trendiest boroughs in Buenos Aires, it has become the preferred address for growing numbers of young professionals and retirees, alike. Increasing property prices have also generated interest in the area as a destination for foreign buyers, particularly those in the market for premium investment properties.
The neighborhood's road network has been entirely rebuilt, especially in the east side. The layout of the east side consists currently of three wide boulevards running east-west crossed by the east side's main street, Juana Manso Avenue. The layout is completed with some other avenues and minor streets, running both east-west and north-south, and by several pedestrianised streets.

Every street in Puerto Madero is named after women. The Puente de la Mujer (Women's Bridge), by Spanish architect Santiago Calatrava, is the newest link between the east and west docks of Puerto Madero; a museum inaugurated in 2008, the Fortabat Art Collection, itself resulted from an initiative by Amalia Lacroze de Fortabat (the wealthiest woman in Argentina).

Puerto Madero currently represents the largest urban renewal project in the city of Buenos Aires. Having undergone an impressive revival in merely a decade, it is one of the most successful recent waterfront renewal projects in the world.

At Puerto Madero Dock 2 (between Azucena Villaflor and Rosario Vera Peñaloza - teacher and La Rioja educator) buildings belonging to the Universidad Católica Argentina stand successively to the west, and the Faena Hotel + Universe (first hotel designed by Philip Starck in South America) is located to the east of Dock 2. Located on the corner of Aimé Painé (Mapuche Princess and indigenous rights activist) and Rosario Vera Peñaloza, the modern Iglesia Nuestra Señora de la Esperanza was inaugurated in 1996 and is devoted to Stella Maris, the patron saint of the Argentine Coast Guard. The docks aligned with Dique 2, between 1400 and 1500 of Avenida Moreau de Justo, are mostly occupied by various apartment buildings and offices of the Universidad Católica Argentina and its Pabellón de las Artes (Arts Pavillion), a space for art showings with access from the pedestrian side of the dock. Here, there are some bars and coffee shops.

Transportation
The recently inaugurated 2 km (1.3 mi) Puerto Madero Tramway line serves the area, running parallel to Alicia Moreau de Justo Avenue (along the ward's western side); however, the neighborhood is still not well-connected to the city's transit network. Few bus routes run through Puerto Madero, no subway line reaches it and there are currently no official plans to extend the subway network to the neighborhood despite planned further extensions of the tramway slated to link the Retiro and Constitución train stations. 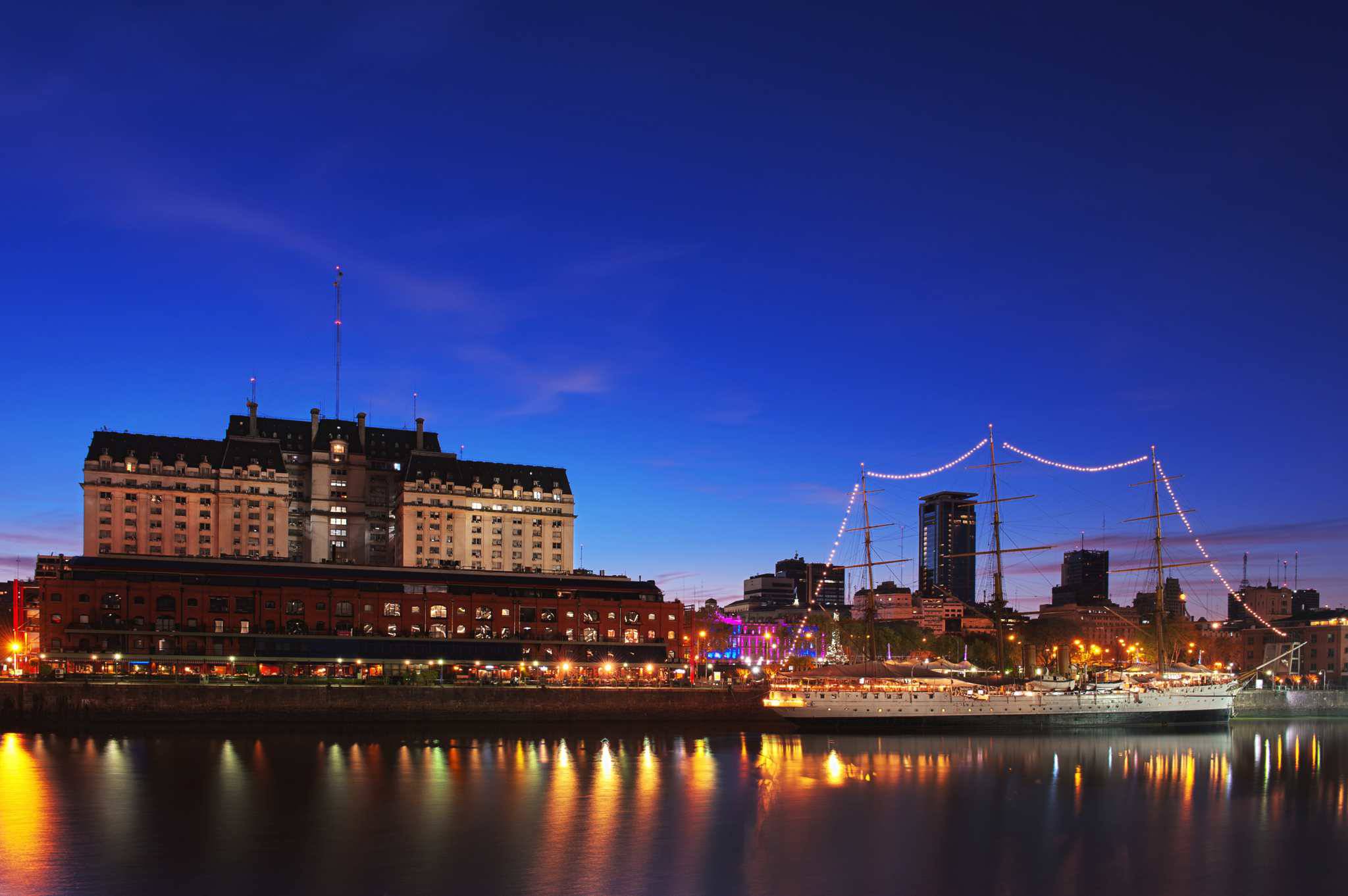