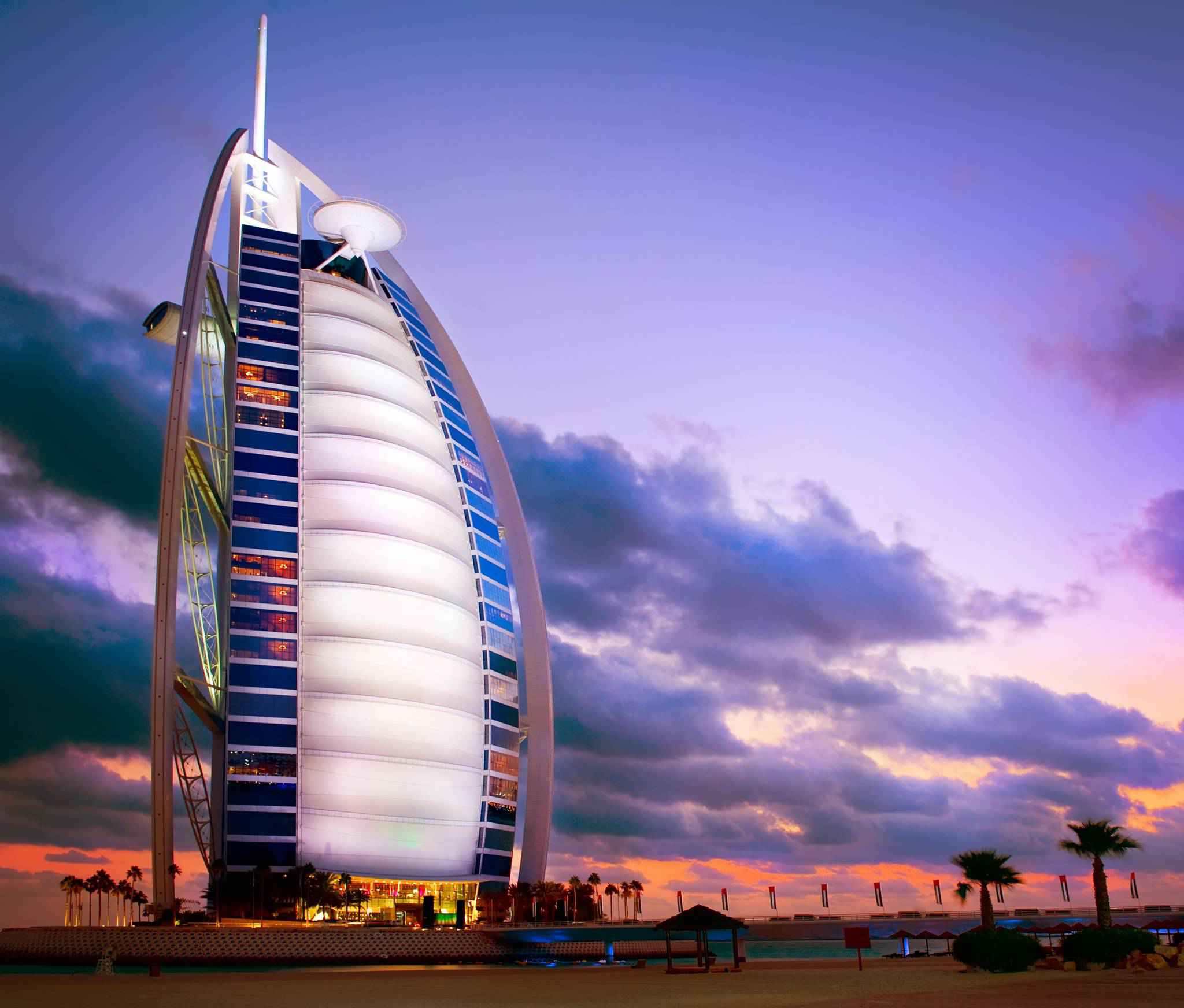 The Burj al-Arab is a luxury hotel located in Dubai, United Arab Emirates. It is the fourth tallest hotel in the world; however, 39% of its total height is made up of non-occupiable space. Burj Al Arab stands on an artificial island 280 m (920 ft) from Jumeirah beach and is connected to the mainland by a private curving bridge. The shape of the structure is designed to mimic the sail of a ship. It has a helipad near the roof at a height of 210 m (689 ft) above ground.

Site
The beachfront area where Burj Al Arab and Jumeirah Beach Hotel are located was previously called Chicago Beach. The hotel is located on an island of reclaimed land 280 meters offshore of the beach of the former Chicago Beach Hotel. The locale's name had its origins in the Chicago Bridge & Iron Company which at one time welded giant floating oil storage tanks, known locally as Kazzans on the site.

Engineers created a ground/surface layer of large rocks, which is circled with a concrete honeycomb pattern, which serves to protect the foundation from erosion. It took three years to reclaim the land from the sea, while it took fewer than three years to construct the building itself. The building contains over 70,000 m3 (92,000 cu yd) of concrete and 9,000 tons of steel.

Burj Al Arab is the world's third tallest hotel (not including buildings with mixed use). The structure of the Rose Rayhaan, also in Dubai, is 11 m (36 ft) taller than Burj Al Arab.

Rooms and suites
The hotel is managed by the Jumeirah Group. Despite its size, Burj Al Arab holds only 28 double-story floors which accommodate 202 bedroom suites. The smallest suite occupies an area of 169 m2 (1,820 sq ft), the largest covers 780 m2 (8,400 sq ft).

Restaurants
Al Muntaha ("The Ultimate"), is located 200 m (660 ft) above the Persian Gulf, offering a view of Dubai. It is supported by a full cantilever that extends 27 m (89 ft) from either side of the mast, and is accessed by a panoramic elevator.

Al Mahara ("Oyster"), which is accessed via a simulated submarine voyage, features a large seawater aquarium, holding roughly 990,000 L (260,000 US gal) of water. The wall of the tank, made of acrylic glass in order to withstand the water pressure, is about 18 cm (7.1 in) thick.

Rating
The Burj Al Arab is a five-star hotel, the highest official ranking. While the hotel is sometimes erroneously described as "the world's only seven-star hotel", the hotel management claims to never have done that themselves. In the words of a Jumeirah Group spokesperson: "There's not a lot we can do to stop it. We're not encouraging the use of the term. We've never used it in our advertising." 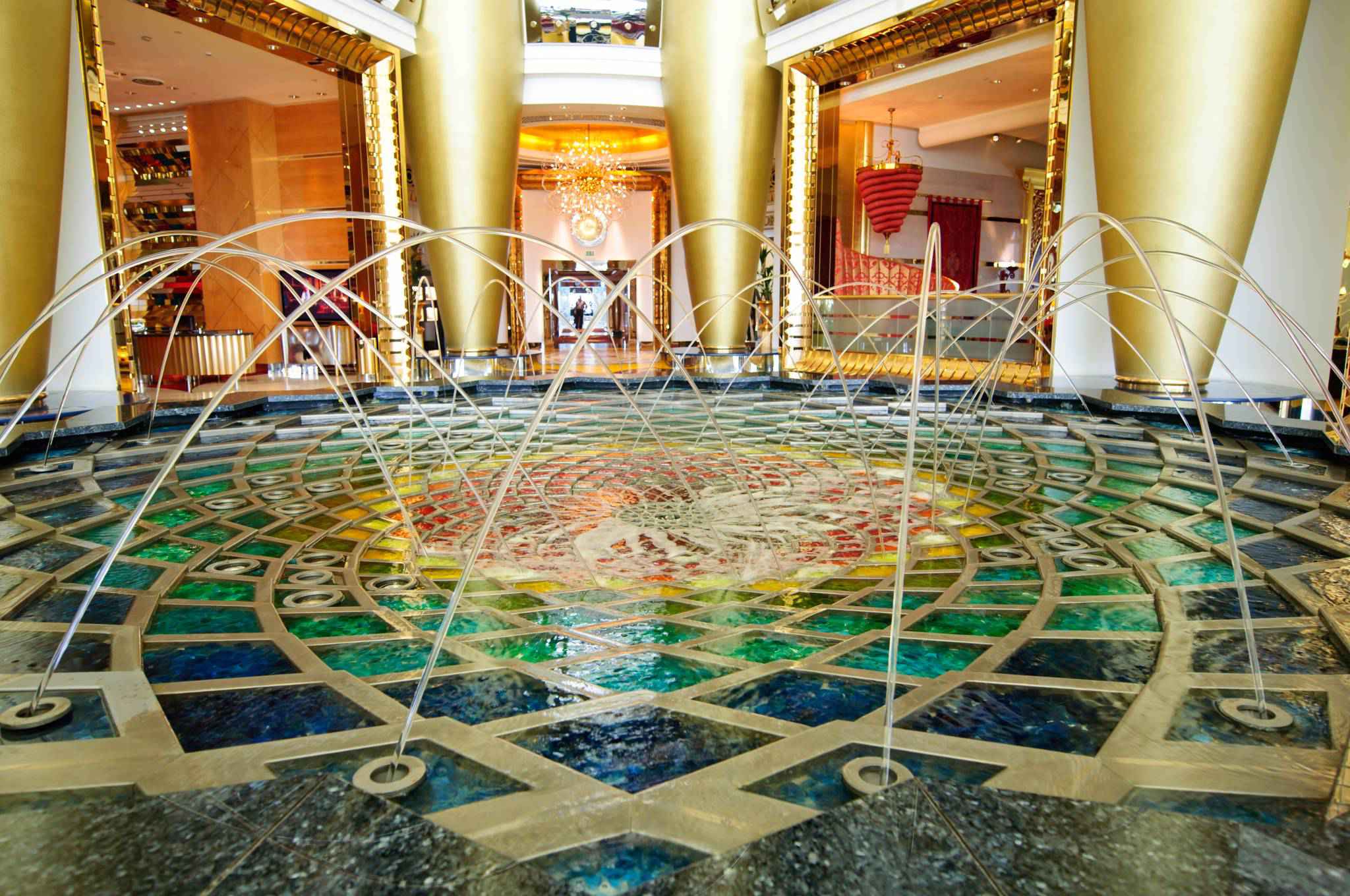