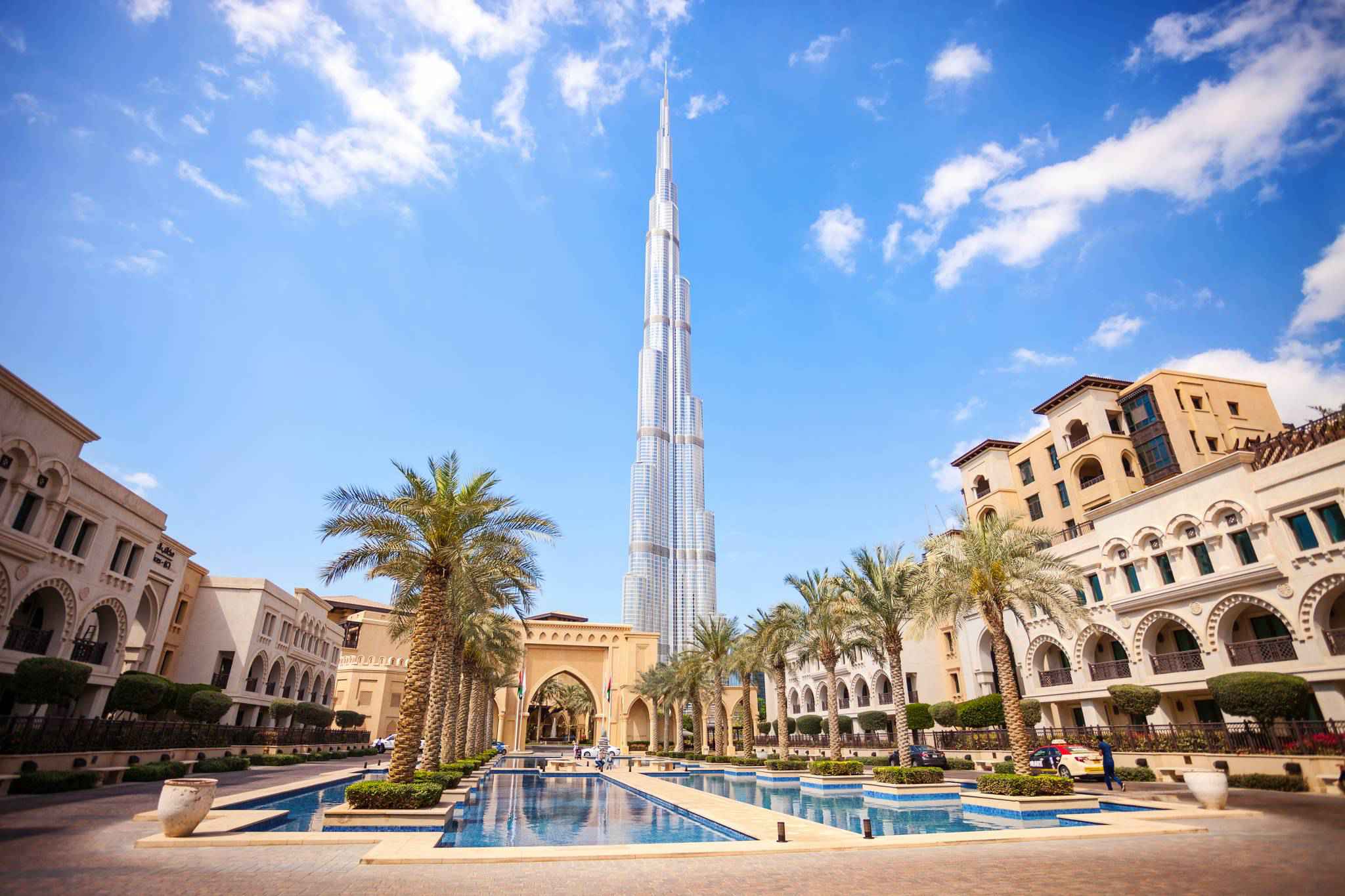 The Burj Khalifa , known as the Burj Dubai before its inauguration, is a megatall skyscraper in Dubai, United Arab Emirates. It is the tallest structure in the world, standing at 829.8 m (2,722 ft).

Burj Khalifa was designed by Adrian Smith, then of Skidmore, Owings & Merrill (SOM), whose firm designed the Willis Tower and One World Trade Center. Hyder Consulting was chosen to be the supervising engineer with NORR Group Consultants International Limited chosen to supervise the architecture of the project. The design of Burj Khalifa is derived from patterning systems embodied in Islamic architecture, incorporating cultural and historical elements particular to the region, such as in the Great Mosque of Samarra. The Y-shaped plan is designed for residential and hotel usage. A buttressed core structural system is used to support the height of the building, and the cladding system is designed to withstand Dubai's summer temperatures. It contains a total of 57 elevators and 8 escalators.

The design of Burj Khalifa is derived from patterning systems embodied in Islamic architecture. According to the structural engineer, Bill Baker of SOM, the building's design incorporates cultural and historical elements particular to the region such as the spiral minaret. The spiral minaret spirals and grows slender as it rises. The Y-shaped plan is ideal for residential and hotel usage, with the wings allowing maximum outward views and inward natural light. As the tower rises from the flat desert base, there are 27 setbacks in a spiralling pattern, decreasing the cross section of the tower as it reaches toward the sky and creating convenient outdoor terraces. At the top, the central core emerges and is sculpted to form a finishing spire. At its tallest point, the tower sways a total of 1.5 m (4.9 ft).

As part of a study which reveals the unnecessary "vanity space" added to the top of the world's tallest buildings by the Council on Tall Buildings and Urban Habitat (CTBUH), it was revealed that without its 244-metre spire, the 828-metre Burj Khalifa would drop to a substantially smaller 585-metre height without any reduction in usable space. As the report states, the spire "could be a skyscraper on its own".

To support the unprecedented height of the building, the engineers developed a new structural system called the buttressed core, which consists of a hexagonal core reinforced by three buttresses that form the ‘Y' shape. This structural system enables the building to support itself laterally and keeps it from twisting.
The spire of Burj Khalifa is composed of more than 4,000 tonnes (4,400 short tons; 3,900 long tons) of structural steel. The central pinnacle pipe weighing 350 tonnes (390 short tons; 340 long tons) was constructed from inside the building and jacked to its full height of over 200 m (660 ft) using a strand jack system. The spire also houses communications equipment.

The cladding system is designed to withstand Dubai's extreme summer temperatures, and consists of 142,000 m2 (1,528,000 sq ft) of reflective glazing, and aluminium and textured stainless steel spandrel panels with vertical tubular fins. Over 26,000 glass panels were used in the exterior cladding of Burj Khalifa, and more than 300 cladding specialists from China were brought in for the cladding work on the tower. The architectural glass provides solar and thermal performance as well as an anti-glare shield for the intense desert sun, extreme desert temperatures and strong winds. In total the glass covers more than 174,000 m2 (1,870,000 sq ft).

The exterior temperature at the top of the building is thought to be 6 °C (11 °F) cooler than at its base.

The sky lobbies on the 43rd and 76th floors house swimming pools. Floors through to 108 have 900 private residential apartments (which, according to the developer, sold out within eight hours of being on the market). An outdoor zero-entry swimming pool is located on the 76th floor of the tower. Corporate offices and suites fill most of the remaining floors, except for a 122nd, 123rd and 124th floor where the At.mosphere restaurant, sky lobby and an indoor and outdoor observation deck is located respectively.

The Dubai Fountain
Outside, WET Enterprises designed a fountain system at a cost of Dh 800 million (US$217 million). Illuminated by 6,600 lights and 50 coloured projectors, it is 270 m (900 ft) long and shoots water 150 m (500 ft) into the air, accompanied by a range of classical to contemporary Arabic and world music. On 26 October 2008, Emaar announced that based on results of a naming contest the fountain would be called the Dubai Fountain.

Observation deck
An outdoor observation deck, named At the Top, opened on 5 January 2010 on the 124th floor. At 452 m (1,483 ft), it was the highest outdoor observation deck in the world when it opened. Although it was surpassed in December 2011 by Cloud Top 488 on the Canton Tower, Guangzhou at 488 m (1,601 ft), Burj Khalifa opened the 148th floor SKY level at 555 m (1,821 ft), once again giving it the highest observation deck in the world on 15 October 2014. This was until the Shanghai Tower opened in June 2016 with an observation deck at a height of 561 metres. The 124th floor observation deck also features the electronic telescope, an augmented reality device developed by Gsmprjct° of Montréal, which allows visitors to view the surrounding landscape in real-time, and to view previously saved images such as those taken at different times of day or under different weather conditions. To manage the daily rush of sightseers, visitors are able to purchase tickets in advance for a specific date and time and at a 75% discount over tickets purchased on the spot.

The plants and the shrubbery will be watered by the buildings's condensation collection system that uses water from the cooling system. The system will provide 68,000,000 L (15,000,000 imp gal) annually.WET Enterprises, who also developed the Dubai Fountain, developed the park's six water features. 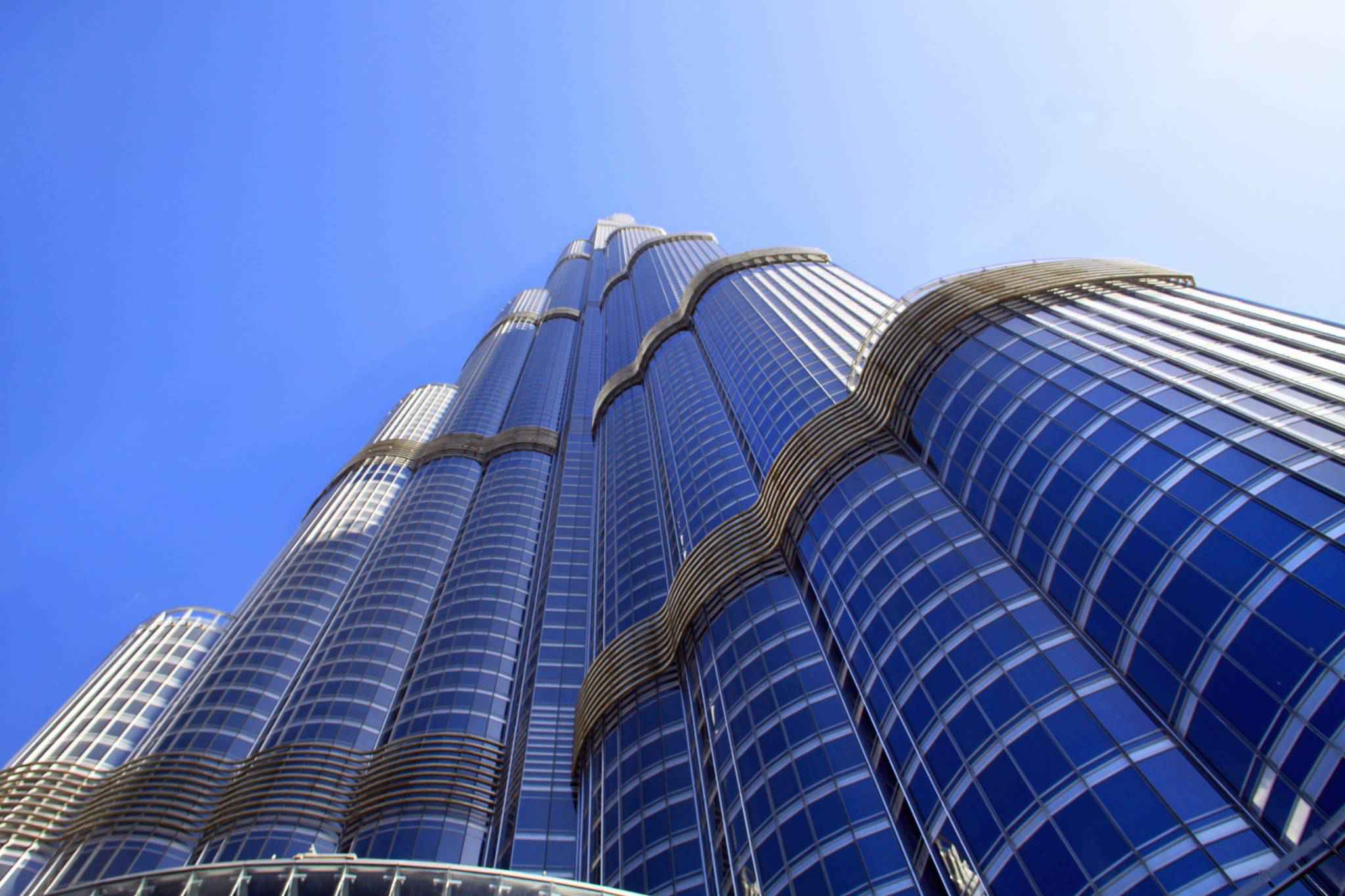